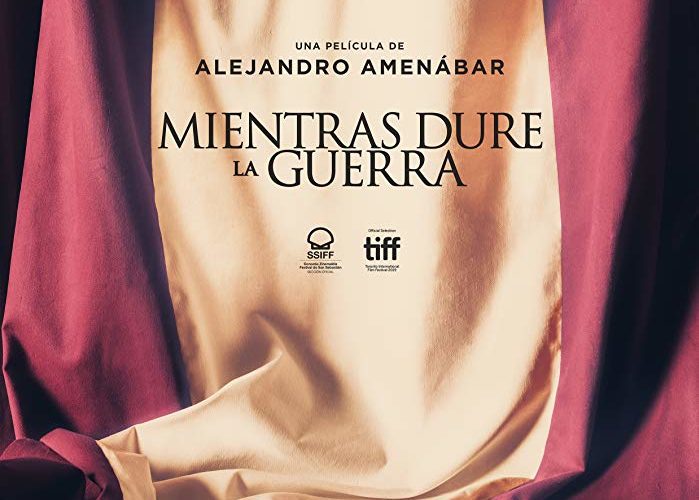 TIFF Review: ‘While at War’ Shows Collective Naïveté as Nationalism Warps into Fascism

Director Alejandro Amenábar spoke very briefly before the screening of his latest film While at War and the main sentiment was this: “It could happen anywhere.” He doesn’t, however, just mean rebellion or uprising. He doesn’t mean coup or military dictatorship either. What he and co-writer Alejandro Hernández share via the parallel journeys of Don Miguel de Unamuno (Karra Elejalde) and General Franco (Santi Prego) is that just fights always run the risk of becoming unjust very fast. This truth is ultimately a product of our collective naïveté when it comes to thinking our nation won’t succumb to tyranny—that a show of force isn’t always about suppression. We will delude ourselves to the point of no return and have nobody else to blame. “Anywhere” is quite literally your backyard.

The similarity of what Amenábar puts on-screen to the current state of American politics is legitimately horrifying. It’s nationalism warped into fascism with a blink of an eye and yet half the population believes it’s “not that bad.” You tell yourself it’s a few bad eggs, project onto the opposition with false equivalencies, and eventually resign yourself to a fate of complacent condonement because you’re one person and thus can’t make a difference. And while it does only take one to give a voice to the masses and ignite change, the personal refusal to sell your soul is meaningful regardless. It comes down to how you want to be remembered. A Nazi sympathizer hypocritically hiding under a blanket of Christianity or someone who values human life above self-interest?

This is the question Unamuno must answer during the course of the film. At the start he’s firmly aligned with the uprising against communism. While the famed author penned an article against the monarchy some time previously, the resulting republic didn’t suit his specific vision. So he did voluntarily back a bit of rebellion as a means of course-correction. Did he know the Nazis were conversely backing Franco in Morocco? The “crippled general” (Eduard Fernández’s José Millán-Astray) arriving in Africa will have signaled him so if not. But as long as the republic’s flag flew, his brain would supersede his eyes. If the military takeover threw the mayor of Salamanca in prison—it was a logical first move. When they kill him, however, justifications are no longer valid.

It’s not like people weren’t actively trying to pry those eyes open either. Between his left wing intellectual best friends (Carlos Serrano-Clark and Luis Zahera) and his youngest daughter (Patricia López Arnaiz), his rebuffs became more of a reactionary tick than well-thought out argument. Unamuno was a man who did not think himself wrong and thus wouldn’t allow himself to be so until the walls start suffocating him as well as the disappearing innocents from his circle. And all the while Franco is solidifying his power abroad with shrewdly composed maneuvers meant to gradually entrench him in the minds of a growing movement of “Long live Spain” chants. The hero therefore allowed himself to go silent while the conqueror positioned himself to become the “hero.” Sound familiar yet?

To Amenábar’s credit, he lets the actions of these men speak for themselves by moving back and forth between them as pure documentation. I don’t mean this as a way of saying he shies from denouncing Franco’s regime, though. The man’s followers organize a rally about race after all. I only mean he lays the facts out objectively without rendering the general as some sinister Disney villain laughing in the background (that’s Millán-Astray’s job). Franco is actually depicted as a contemplative strategist who loves his wife and God equally. This is a crucial point I think because it shows how seemingly “good” men are capable of horrors regardless of whether they attend church. Letting a prisoner have absolution before shooting him in the head without a trial doesn’t make you righteous.

The same goes with Unamuno too. With him, however, the complex ruminations are more animated and ultimately work towards revealing he isn’t the infallible man he thought. Where Franco’s quiet dissent to those surrounding him is his way of telling them he was right, Unamuno’s frustrated screams are steeped in anger at himself. That progression isn’t joyously profound, though. It’s actually very painful. Here’s this proud man who believes he can talk everyone into doing his bidding because of his name who’s forced to stand in the street scared, with head facing down, as a man he disagrees with but loves nonetheless is dragged away never to be seen again. That fear is contagious from someone like him because it shows those willing to stand tall that they’ve already lost.

This is powerful stuff that transcends time and place despite the production design being impeccably executed. A lot of information is laid out considering While at War sticks to the behind the scenes machinations of men pulling strings, but it’s always expertly composed for us to remain cognizant of every in and out. A sequence in Morocco will be commented on in Salamanca and vice versa. Military decisions impact Unamuno’s responsibilities at the college where he serves as dean and his agreeing to those demands (or denouncing them) has impact because he can and will be used as a puppet. He often realizes this in real time too—futility hijacking Elejalde’s expression in response to a monster’s smile. Unamuno’s sole weapon is defiance, but only if he’s strong enough to wield it.

While at War premiered at the Toronto International Film Festival.