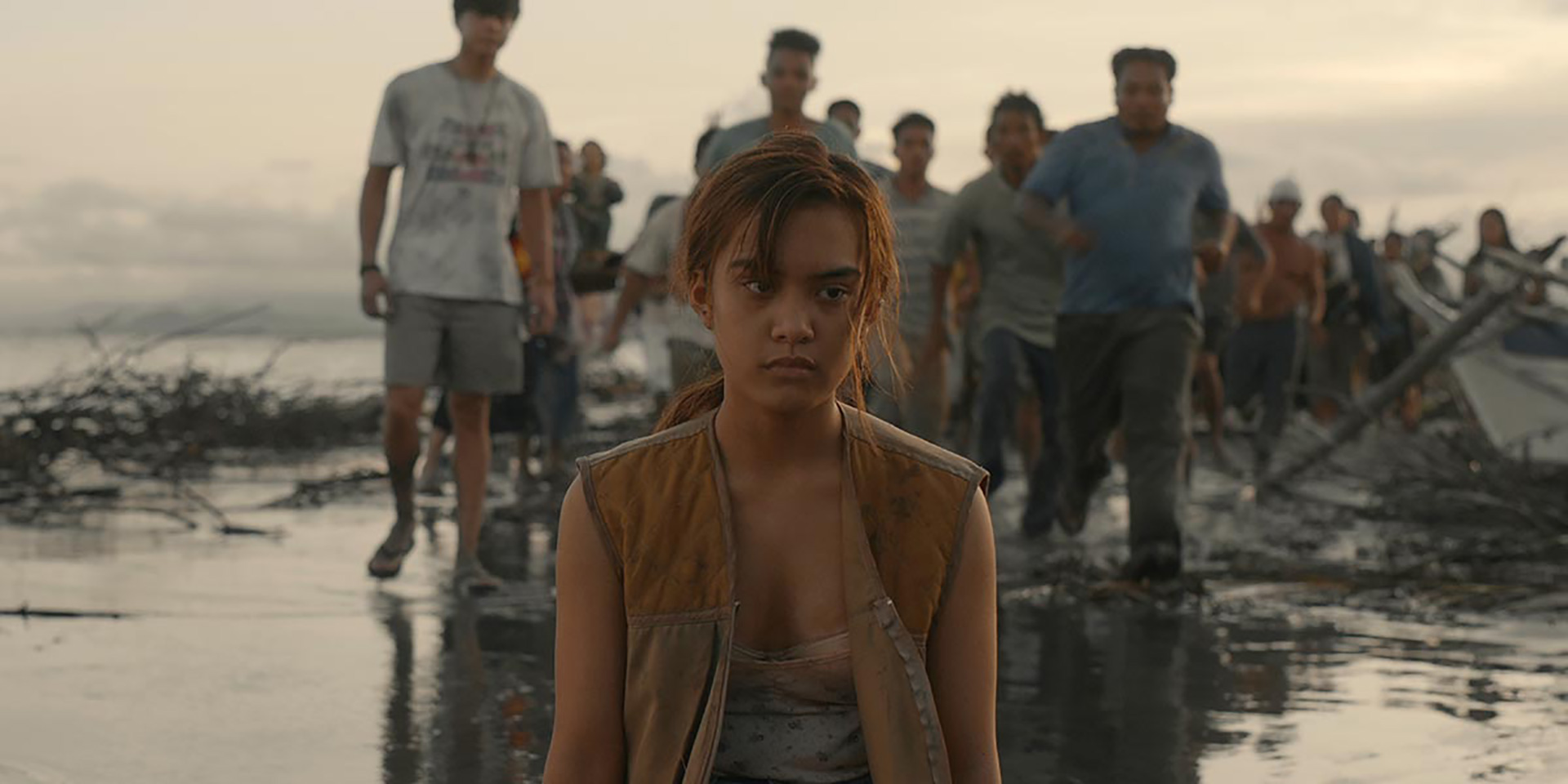 The ambition behind Carlo Francisco Manatad’s Whether the Weather Is Fine is undeniable. Set in the aftermath of 2013’s Typhoon Haiyan (aka Super Typhoon Yolanda), the film opens on Miguel (Daniel Padilla) waking to the fact that there’s no longer a house surrounding him and his couch. More sleepwalking in disbelief than searching with desperation, he moves to find his mother (Charo Santos-Concio’s Norma) just as his girlfriend (Rans Rifol’s Andrea) finds him. Everywhere they go has been shattered to pieces architecturally, emotionally, and morally—altruism flying out the window as a dog-eat-dog mentality sinks in. And no one can move an inch without running into someone else thanks to an extras list so expansive, their continuous end credit blocks are blindingly dense.

While the plot’s as simple as “trying to find direction” when none can seemingly be found, it doesn’t make it any less autobiographical in that psychological headspace for Manatad considering his Philippines setting (and hometown) of Tacloban was pretty much destroyed. The atmosphere’s dreamlike trance is therefore intentional as a means of bottling the experience this trio of characters must endure without having any idea how. They’re walking by dead bodies in the rubble, listening to loudspeaker announcements of a second storm on the horizon, and forced to predict the unpredictable as the actions of strangers become increasingly erratic. It’s that sense of dread that works so well because it puts us in the moment’s impossible breadth. While purposefully seeking alienation and disorientation, however, Manatad also embraces humor.

This is where I found myself a step apart. Sometimes a film can look and feel like an epic masterpiece while also proving its existence is on a wavelength you just can’t tune yourself to for maximum impact. That was unfortunately my experience for most of the runtime as I found myself less disoriented than blocked. My wanting to witness the turmoil and confusion Manatad sets up so perfectly made the surrealism and absurdity of his steady stream of wild tonal shifts too much to bear. Knowing it was intentional helped me wrap my head around the choice, but it didn’t suddenly make my memory of it less frustrating. Because while the destinations sought are authentically impulsive, the roads traveled take on an incongruous skit-like construction.

It’s a bit hit or miss in that regard. Norma tricking an army guy handing out rations into giving her his cigarettes is hilariously deadpan. Andrea inexplicably helping another living creature (despite doing the exact opposite until then) only to become a Christ-like messiah is distractingly silly. Thankfully there’s more drama in-between these asides to sustain interest in the over-arching narrative’s path towards the port with Manila’s shores awaiting. That’s where Andrea is heading with or without them. It’s where Miguel wants to follow her if his mother agrees to come too. And it’s where Norma promises she’ll meet them after finding her ex-husband (Miguel’s father) to say goodbye. The three converge and diverge so often that we expect one to pop up whenever another is shown alone.

Putting those motives against a background of this scale is where Manatad’s boldness truly comes in as he and co-writers Giancarlo Abrahan and Jérémie Dubois are always finding a way to make the mundane unforgettable. Rather than let Norma just run into someone who may know where her ex is, they put her through a gauntlet of military forces to talk back to and a little girl she’s never seen in her life calling out her name with information. There are innocuous moments like a starving Andrea taking more and more crackers after being told to conserve what’s left and tensely off-putting ones like a child silently miming eating popcorn out of an empty bucket before unfurling to pounce. Every new location carries a unique ordeal.

That sense of excitement kept me going even when I knew it was a fifty-fifty chance the resulting experience would match my anticipation. I enjoyed those instances where Miguel and company are left with even less than the nothing they started with best because the situational humor of kids ganging together to constantly steal from them is impeccable. I therefore wonder if a second viewing—knowing what to expect tonally—might leave me with a greater satisfaction to go along with my already robust appreciation. Because while I can’t ignore the lulls and the scenes that fell flat, I can without a doubt applaud the audacity Manatad shows in the attempt itself. He knows what he wants and achieves it. You, like me, just might not be ready.

Whether the Weather Is Fine played at the Toronto International Film Festival.