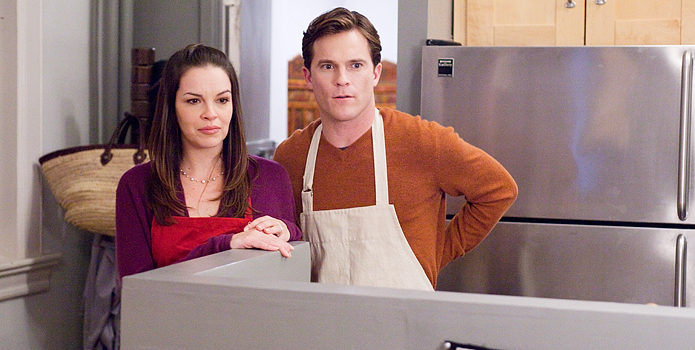 New York’s Union Square is the point in the city where many destinies cross, not to mention most all of the city’s subway lines. This is where we first meet Lucy (played by Mira Sorvino) as she hopelessly texts “Jay” – an unseen lover, perhaps for a tryst at the W Hotel overlooking the square. In a huff she departs to Filene’s Basement, wasting time in the square.

Here’s the problem – I disliked everyone in this film. Imagine having dinner with a self-centered family that really shouldn’t have as many problems as they do, fighting it out as years of lies are slowly revealed over time. It could be fun, it could be painful. This is the later, mostly because everyone is self-centered lacking the complexity of good social realism. Mike Leigh, this is not.

Sorvino plays Lucy, a women who takes a train some 40 mintutes from The Bronx downtown to Union Square to meet up with Jay. When he’s not free (dinner with is wife), she decides to pay a visit to her estranged sister, Jenny (Tammy Blanchard), who runs a natural foods company with her finance, Bill (Mike Doyle). Folks get rapped up in lives, it happens but in the age of identity politics, where everyone exploits their “roots.” Either real or imagined, Jenny hides her roots and her sister is evidence of why that’s not such a bad idea.

Lucy is a self-centered, unreliable narrator on the verge of a nervous breakdown, unsympathetic perhaps because we enter in the middle of her story and do not see her full disintegration. It’s only jarring, not emotionally effective. Not terribly rational or even bright (she obsessively watches a reality based TV show set in a beauty salon), she is so far removed from “human” and played far over-the-top by Sorvino.

Blanchard’s Jenny is rational, if not the least bit warm. We learn from her that their mother was crazy. Unknown to Jenny until 20 minutes into the film and delivered by Lucy is that their mom is also dead. They must have had a cold relationship for Jenny not to call Lucy back, if we even believe Lucy called in the first place.

Directed by indie film vet Nancy Savoca who, working in digital video, has made something that looks more like a Joe Swanberg film (although less creepy, but about as annoying) than John Cassavetes film. There’s an honesty to the secrets not revealed by the end credits. Unfortunately, the problems outweigh any kind of narrative ambition. With characters played with about as subtly as one of those reality shows Lucy enjoys so much, it’s not a very pleasant or engaging experience.