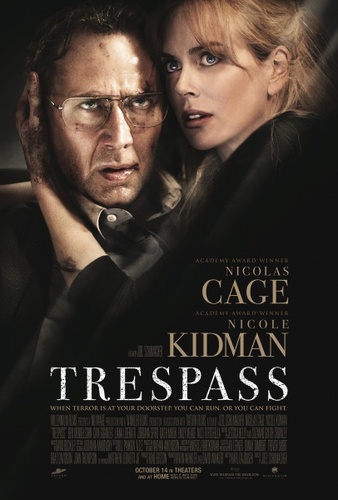 It would be ignorant to deny certain preconceived notions going into a Joel Schumacher home invasion movie starring Nicolas Cage. I was dumbfounded when it got added to the Toronto International Film Festival slate, but the inclusion of last year’s Rabbit Hole stunner Nicole Kidman and Animal Kingdom‘s best element, Ben Mendelsohn, raised slight interest. But the film doesn’t even deliver in a B-movie sense, void of deliciously wacky performances and tense thrills.

Kyle (Nicolas Cage) is a diamond broker who lives in a newly-built, security-heavy mansion with his wife Sarah (Nicole Kidman) and their teenager Avery (Liana Liberato). The generic, cliché-ridden opening begins with their daughter sneaking out of the house to a part as her parents are in a fight. There isn’t a moment here with any sort of genuine stakes. As the film progressed, it was difficult to care who emerged the victor.

Dressed as police informing about recent burglaries in the area (how funny!), the four robbers get let into the house and the drawn-out ordeal begins. This is a loud, obnoxious film with little grasp on reality. With the inane robbers screaming at the top of their lungs and Cage attempting to inject his misplaced quirk into a few deliveries, the mess gets too annoying for there to be any sort of tension.

Since no situation feels fresh, every single plot point can be calculated from the onset. Atrociously edited, Schumacher covers up lack of coverage with quick flashes during key action scenes. One of the more egregious moments occurs when Kidman is running away from the home invaders as they are just about to catch her. With no explanation, it quickly cuts to her inside a car attempting an escape. When similar  instances happen more than once, it is gloriously easy to recoil any investment in this story.

Add in the cheesiest of flashbacks explaining backstory (including Kidman’s relationship with Cam Gigandet, spoiled above in an official still), and this “thriller” devolves into the bottom-tier, straight-to-DVD material. At least distributor Millennium Entertainment knows just as much, releasing the film in that format in early November, just two weeks after a short theatrical run.

After seeing Werner Herzog explore a frightening home invasion story with palpable emotion in Into the Abyss (screening at TIFF), it is impossible to give any sort of credence to such a sloppily-constructed, dull effort. The only positive that can be said is Schumacher wants us to get out of there as soon as he does, with the short film concluding mere seconds after the climax. Lock your doors and stay inside when this embarrassing addition to TIFF’s line-up hits theaters.