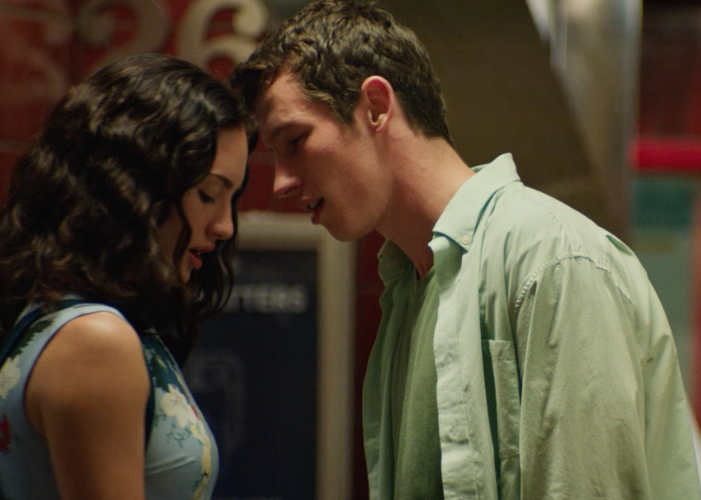 The romantic comedy formula is one that can’t help but become redundant in premise. How many different scenarios are there for two people to converge? Even so, Adam Leon may have found a new one with his meet-cute during a dead-drop gone wrong called Tramps. It should have been a painless exchange: Ellie (Grace Van Patten) picks up Danny (Callum Turner), they retrieve a briefcase with unknown contents, and deliver said case to a woman with a green purse at the train station. She may have second thoughts and he may be pinch-hitting for brother Darren (Michal Vondel) who’s currently in jail, but how could anyone screw this up?

Easy: two women with green purses might be on the platform. And being the less than smooth operator Danny’s amateur chef proves, he takes the wrong one’s bag before quickly boarding the nearest train for escape. Only then does he spy his actual target’s incredulously confused face. It’s a minor miracle he even tracks Ellie down to breathlessly explain his error. Knowing her own financial spoils are on the line, helping him is a necessity. They call the man who organized everything (Mike Birbiglia‘s Scott)–himself a middleman–and off they go chasing the single lead they procured. Bonding ensues, feelings are shared, and neither lives up to the preconceived assumptions this line of work cultivates.

Leon sums up what follows perfectly by labeling the film a “romantic adventure.” Neither lead knows where he/she is going nor what to do upon arrival. Ellie’s from Pittsburgh, the money she’ll earn intended to assist her escape from a boyfriend she no longer loves. Danny rejects the notion of doing anything his brother would do because he knows it’ll be illegal. The only reason he considers it is his missing a cell phone bill. Darren promises a cut to pay it off and, when that’s still not enough, speaks in Polish with their mother to force him. It’s the blind leading the blind down a pyramid where each level consists of less experienced participants. Whereas countless criminal endeavors of this ilk quickly turn into a race against time with someone kidnapped as collateral under threat of being maimed or killed, Leon really isn’t interested in such cliche. As it is, Tramps was born out of his and co-writer Jamund Washington’s desire to simply deliver fun romance at the movies. The dead-drop concept was created afterwards to provide a means for connection. Yes, they screw up and, yes, their boss’ bosses are mad, but losing their own money is enough incentive to fix everything. Violence is never even an option as Ellie and Danny maintain full transparency throughout. If plans change, a call is made. Simple. Our focus remains solely on the relationship.

That’s enough to make the journey we take with them worthwhile. What starts as chore quickly becomes an enjoyable ride once they let down their guards. Side deals are made and whispers of deceit are bandied about, but the core of girl and guy getting to know one another under extreme circumstances endures. While you cannot deny their chemistry, Leon refuses to put them together inauthentically by going more towards a Once vibe than Katherine Heigl vehicle. Hormones don’t rule them; they have complicated lives a kiss can’t erase. They also have a job to complete. Be content with flirtation because it’s more than enough when coupled with a pair of the most charming performances of the year.

Turner is perfectly awkward in trying to be cool without ridding himself of verbal phrases or fears that may prove otherwise. He can’t help himself from being genuinely good, but he’s just as quick on his feet to escape precarious situations. And every time he says or does something a guy like his brother would never have the capacity to do, we see Van Patten’s eyes soften as another layer of brick disappears from her perimeter wall. It’s not difficult to see that her Ellie has been hurt often enough to keep relationships at arm’s length, but she isn’t completely unapproachable. She has a sense of humor, a fearless streak, and the courage to know what she wants.

There are countless opportunities to screw each other over and even more instances where quitting would easily prove the smartest option available. They never stop moving forward, though. And they never do anything that doesn’t seem one-hundred percent natural. They’ll constantly surprise the other in good ways and bad, a return to the lives they led before crossing paths always in the distance and always not quite what they want anymore. Both have dreams they’re quick to explain and quicker to ignore when the chance presents itself because the whole film barely scratches twenty-four hours: hardly enough time to overcome their psychological obstacles. It is just long enough to realize change only happens after taking that first step.

Tramps premiered at the Toronto International Film Festival and hits Netflix on April 21.