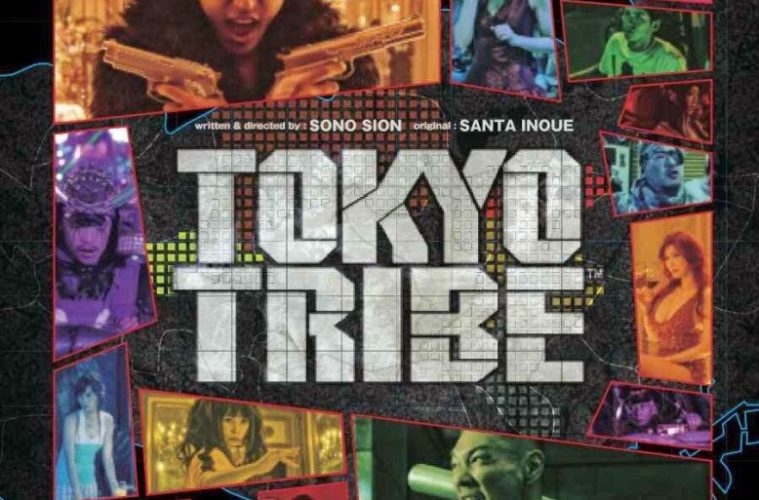 Though a hip-hopera (the last film to earn that label possibly being R. Kelly’s everlasting epic, Trapped in the Closet), Sion Sono’s Tokyo Tribe puts itself in the company of the extreme Japanese genre cinema eaten up by festival audiences, given their brutal violence and flagrant weirdness. Those essential thrills notwithstanding, it becomes off-putting in how one must struggle to keep up with the film throughout — not just in the narrative terms of story and character, but also its extreme formalism. The camera is constantly roving to seemingly new characters, gangs, and raps almost every couple of minutes — even if, on the other hand, the beats seem very redundant. Yet what makes Tokyo Tribe ultimately unique, if still problematic in its sheer amount of chaos, are the underlying politics.

While based on a manga, it’s impossible to imagine the film’s musicality being found in any form on the page, yet moreso the context of hip-hop illuminates what’s truly of interest about this film beyond just its midnight-movie kicks. Sono points to how the hip-hop genre shares equal history with both lower and upper classes, with angered protest music targeting racism and authority transitioning to ostentatious displays of wealth and power. Violence is inherent in either form, yet the film’s villainous Big Buppa, a Tokyo crime lord, makes clear gangster rap’s ultimate place as the new oppressor. To quote Killer Mike’s “Big Beast,” one of the best rap songs in recent memory and one which offers a firm reminder of hip-hop’s place in the post-Occupy world: “We some money hungry wolves and we down to eat the rich.” These “wolves,” though, are seen in the opening shot: two children who promise to save the city one day, the camera then plopping from their perch to the ensuing madness of this dystopian Tokyo. If to pluck just one memorable character from this mass of rapping, Warriors-esque hip-hop gangs, it would be the grandma DJ who blends in as naturally as any of the other freaks, punks, and lost youth. This is because they’re all victims of Tokyo’s tragic 2011 earthquake, referenced in lyrics and physically manifested, or rather reminded of, through the rumbling ground and televised threats. It thus becomes easy to imagine their landscape as the realization of a city’s nightmare in the wake of devastation, no matter how much jubilant atmosphere seems to arise from either the performers or Sono’s music-video excess.

Yet by the all-out street-war climax — strikingly similar to Sono’s previous film, Why Don’t You Play in Hell?, which brings the chaos to its strangely most understandable point, speaking for character confrontation — unfortunately reduces much of the film’s oddball energy and critique to simply noisy spectacle. At least the closing rap, a unified chant of “Tokyo Tribe,” signals unity and sends the film out on a strangely humanist note, though one it’s quick to negate with a post-credit dick joke. So it goes in the new Tokyo.

Tokyo Tribe is screening at TIFF and opens on October 23rd.