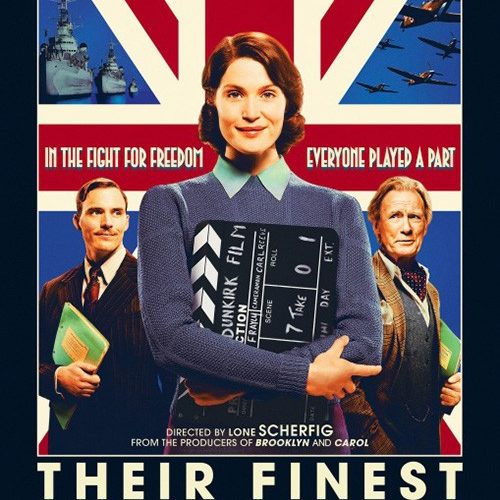 Ticking off multiple points on the big crowd-pleaser checklist, Their Finest is a romantic dramedy about patriotism set during World War II, with a nice splash of girl-power sentiment thrown in as well. And it has Bill Nighy. Can’t do a middle-brow British prestige picture without that guy nowadays. Whenever it hits theaters (likely around the holidays), it’ll make for a good family outing. Your mom will probably cry – and so might you, but don’t be too ashamed of yourself.

Gemma Arterton stars as Catrin Cole, a housewife in London during the Blitz who semi-stumbles into a job punching up scripts for Ministry of Information films. After interviewing twin sisters who participated in the evacuation of Dunkirk, she pitches their story to the studio, which decides to turn it into a feature. Catrin works as screenwriter alongside Tom Buckley (Sam Claflin), who’s temperamental but oh, quite fetching, isn’t he? And they banter so coyly… pity Catrin is already married to impoverished artist Ellis (Jack Huston), who just can’t seem to understand the independence she’s found in her own work now that the shortage of men has forced employers to hire women. Throw in copious studio and government interference, prima-donna aging actor Ambrose Hilliard (Nighy), and that pesky Luftwaffe, and it’ll be a miracle if Catrin’s movie makes it at all.

Produced by BBC Films, Their Finest is the latest studio film to assert the importance of, well, studio films. I didn’t think it possible for one to turn movies into life or death more than Argo, but this might actually have pulled it off, positing its fictional production as vital to the morale of the British public. There is of course a spirited discussion to be had about what kind of influence wartime propaganda has in the popular consciousness, and how powerful that influence is, but nuance isn’t exactly in the cards here. Which is fine, honestly. It’s more fun to watch pretty British people make movies and fall in love than for them to debate public policy. But the rosy portrait of the subject (the word “propaganda” isn’t even spoken once) will weird you out the more you think about it.

The movie makes a game attempt to resonate as something stronger than a typical period romance, wringing its wartime setting for all the pathos it can manage. But even the horrors of the Blitz feel too gentle here, and the film’s attempts to depict them sometimes even backfires – the opening scores Catrin walking by bombed-out buildings with tinkling upbeat music, for instance. Director Lone Scherfig has a strong handle on the comedy (Nighy is a constant delight, even though the heavy focus on his character distracts from the alleged central theme of women in the workforce during the war) and a decent grip on the drama (it’s surprisingly unafraid to inject some real if contrived tragedy into the story), but makes conflict seem cuddly. This is the sort of movie that sighs for the good ol’ days, even if it must grudgingly acknowledge that things kind of sucked for women and everyone was expecting to die horribly. Their Finest can’t escape its own slightness, though it’s fun enough while it lasts.

Their Finest is premiered at the Toronto International Film Festival and opens on April 7.