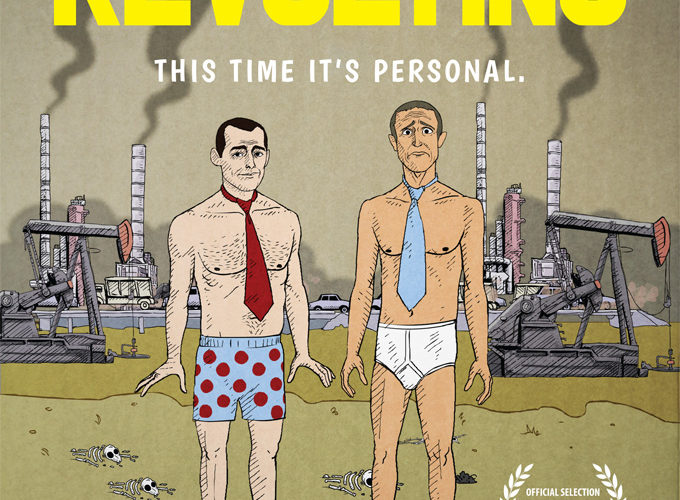 The second collaboration between the artist collective known as The Yes Men and documentarian Laura Nix takes a more personal look behind the collective. The culture jamming DIY collective led by Andy Bichlbaum (Jacques Servin) and Mike Bonanno (Igor Vamos) have taken on the establishment time and time again, and from time to time they get fatigued. While the previous documentaries focused squarely on the activism, work and preparation that goes into an action, The Yes Men Are Revolting provides a slightly more intimate look into their lives including Igor’s (aka Mike) hiatus from the collective in Ireland.

The problem is The Yes Men are not POV filmmakers. Having effectively duped the media into staging press conferences with slick production values (by DIY standards), they’re good at getting their message out there, although this film suffers from the same frustration I once had with “activisms” —  you can call attention to a problem without posing a solution. Andy and Mike don’t have the answers but the work they do, such as calling out large companies like BP by impersonating executives, is intriguing. Often the film fills in certain gaps with news footage because once the jig is up, The Yes Men go on a media tour to justify their message. The antics ultimately lead to a lawsuit perused by the US Chamber of Commerce for “Commercial Identity Theft.” Nix, Servin and Vamos have crafted an entertaining documentation of their work, full of big laughs along the way, however the experience is frustrating, especially while waiting for a resolution to story threads that are introduced. Told occasionally via a first person “shaky video,” verite footage and the fair use of media clips sourced from the web, The Yes Men are Revolting may make for a good-enough introduction to the cause for viewers unfamiliar with their antics. Treading into more personal elements, Nix and the camera crew barely capture the lives of their partners. We learn in voice over Andy’s relationship with Mike and their work has been a strain on many relationships, including his current boyfriend. Mike’s wife (barely a presence) is an Irish citizen and for an unexplained reason he leaves his professorship to Ireland and returns following the birth of his third child for a climate action.

All over the map and lacking focus, some may find it to be an accurate reflection of the Occupy movements, which called attention to inequality gaps, the surveillance state, and much more. The frustrating thing about this project is it doesn’t have to be this way. The gaps and abrupt shifts in storytelling never quite allow ideas to gel and take shape. As socially conscious entertainment, The Yes Men and this film succeed. The issues they call attention to with stunts like Survivor Balls (a mock-up of a padded suit that allow one to survive natural disasters) floating across the Hudson are important.

This stunt, along with cartoon inhalers given free to children by big energy to make asthma cool, are funny ways of highlighting important issues even if they are recycled. This film contains new actions as well as personal footage from Hurricane Sandy, yet the personal elements, which make their biography all that more interesting (including family history) provide some additional detail as to their motivation. While the subject matter remains intriguing, The Yes Men deserve a better and more intimate documentary than they have made about themselves.

The Yes Men Are Revolting premiered at TIFF. See our complete coverage below.