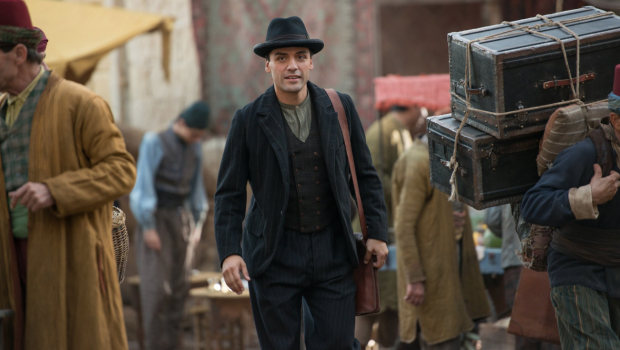 Terry George‘s The Promise begins with a title card that appears on-screen stating that 1.5 million Armenians were killed by the Turkish government during World War I. It’s a tragedy that has been depicted before in film, perhaps most notably in Atom Egoyan’s underwhelming Ararat, with ample room still made available to deliver the definitive version. Despite formidable talent on both sides of the camera, unfortunately we’ll have to wait longer for such a drama to arrive.

The film takes place on the brink of World War I in Turkey. Michael (Oscar Isaac), an intelligent, compassionate Armenian, decides to settle down and marry a girl (Angela Sarafyan) that he’s not completely smitten by, but claims that with time he will indeed love her. He lives in Armenia, but opts to journey to Turkey, without his wife, to study medicine at the Imperial Medical School and become a doctor within two to three years. He promises his wife he will be back. That promise will drive the core narrative of the film, but will also provide its one major flaw.

In Turkey he stays with his uncle Mesrob (Igal Naor) whose beautiful daughter Ana (Charlotte Le Bon) is in a relationship with Associated Press journalist Chris (Christian Bale). However, Ana catches Michael’s eyes and they embark in a secretive affair. Meanwhile a genocide is happening as Armenians are being rounded up and killed all across the country. Michael is captured and thrown into prison, but a tension-filled escape sets him free as he embarks to return home.

Terry George, whose Hotel Rwanda also dealt with a historical genocide, shoots the film with visual care. With the help of cinematographer Javier Aguirresarobe (Vicky Cristina Barcelona, The Road), he sets the scene capturing a vast, alluring Middle Eastern landscape, filled with deserts and mountains. The battle scenes are also immaculately shot by George, giving the film a grit that might be hiding under Aguirresarobe’s romantic photography. Somewhere in here lies a great war movie, but the screenplay, by George and Robin Swicord, hits more than a few rough patches when focusing on Michael and Ana’s affair. These inconsistencies as it pertains to an rudimentary love story bog the proceedings down.

Isaac is fabulous in the role of Michael, a man caught up in the midst of a violent war that cannot be escaped and will eventually turn into genocide. His eyes tell a world of forbidden emotions that his character keeps knitted deep inside him throughout. The Guatemalan-born actor, who initially built his career on these sorts of epics, from Agora to Robin Hood, sports a spot-on Armenian accent with finely tuned mannerisms to sketch out his character.

Bale is limited with his role which has his Chris passionately fighting for the lives of Armenians, but also for Ana’s love, which is slowly escaping him. Despite the lackluster romantic plot, the chemistry he shares with Isaac onscreen is potently conveyed and creates tension that rarely lets up. They both respect each other, but also have a mutual distaste due to sharing the same affection for a woman.

One can feel the importance of retelling these events when it focuses on the right circumstances, but when The Promise sags with cluttered, obvious tropes that have similarly downgraded countless war movies before it, it’s a disappointment. If George set his sights on capturing the effects of this tragic stain in history rather than love-making, we might have gotten a drama worthy of the talent involved.

The Promise premiered at the Toronto International Film Festival and opens on April 21.