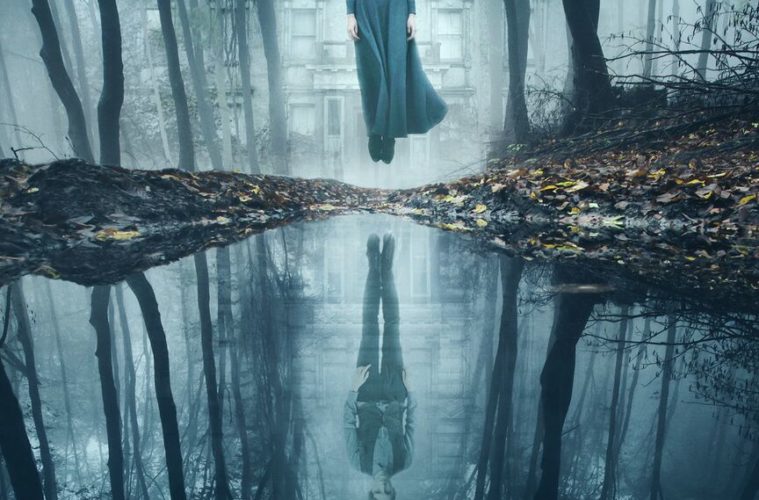 A family’s shame marks them forever—their fate sealed by birth, bound by a poem’s rules. They must be locked in their rooms by midnight, never let a stranger through the door, and remain together or else the one who stays dies. Rachel (Charlotte Vega) and Edward (Bill Milner) have lived these edicts like their parents before them and onwards back two centuries. But now on their eighteenth birthday, it’s time for these twins to fulfill their roles within this enduring lineage. Knowing everyone before them died shortly after doing the same forces Rachel to seek courage for an escape. However, unless she coaxes Edward to follow, her freedom cements his demise. So she stays in hopes he’ll muster the will to leave their decrepit home for the first time in a decade.

This is the test Brian O’Malley’s The Lodgers presents. Screenwriter David Turpin isolates them as a means of survival against forces they cannot control. Whereas Rachel and Edward have free reign of the house during the day, their ancestors rule at night. Waters rise from beneath their foundation at twelve, bubbling through a trapdoor at the base of the main staircase. With it come ghostly specters and whispers taking the form of those still alive—decomposing and waterlogged visages of Edward haunting his sister or Rachel’s voice beckoning her brother near. We don’t know what these two are tasked with, only that he’s resigned himself to it while she staunchly refuses. And as this supernatural clock ticks down, so too does their sole means for money: the family trust.

Fate has intervened, pushing them closer to a decision that will either destroy them or deliver salvation. The manager of their finances (David Bradley’s Bermingham) readies a housecall despite the rules stating no one can enter. The village shopkeeper (Deirdre O’Kane’s Maura) is calling in their credit. And the unsavory men about town inch closer to their gate. Everything’s converging upon them as Edward retreats further into a growing paranoia and Rachel endures the hauntings of her parents floating above the lake where they drowned. The more the pair resist, the more these as yet unexplained forces push the boundaries of their own rules. If Rachel wants to stay out of her room at five before midnight, why shouldn’t they arrive early to inject some fear into her growing strength?

O’Malley takes Turpin’s concept and runs with it, creating a mirrored world turned upside down with ground and sky flipping each new day so the water’s gravity works in reverse. A running motif of a radial splash in the lake retracting into the contours of a foot above instills dread as evil appears to take physical form. We see silhouettes in doorways, locks latch by themselves, and the horror amplifies until their sanctuary can no longer disguise the truth that it’s actually a tomb. Water predicts the contact, the fear on Rachel and Edward’s faces impossible to ignore. She strives to be his savior despite his inability to conquer internal demons but who will save her? Maura’s son Sean (Eugene Simon) could try, but doing so will likely seal his own fate instead.

So we let the atmospheric mood draw us into the horror as mystery makes way towards scares. The whole looks gorgeous from the macabre carcasses of long-dead pets to the image of two bodies silently floating above the lake as O’Malley holds our attention with the rising malevolence executed by Milner and inspiring desire to take hold of her destiny imbued by Vega. That which frightens them is left shrouded in secrecy beyond the connection to their blood and the result their disobedience secures. And while this works at first to keep things esoteric and minimalistic, Turpin withholds the truth for too long. We begin to take the ghosts for granted, instead investing in the budding relationship between Rachel and Sean that unfortunately seems like nothing more than distraction.

Sadly that’s exactly what it proves to be for the most part. Sean’s subplot as an Irish traitor who fought for the British becomes an awkward device to single him out as a “good guy” Rachel can trust and as an opponent to the abusive men their village harbors. I’m not sure why he couldn’t have been presented as “good” without a comparison, though, especially since those other men add little to the plot. Cut them out and nothing really changes. Sean will still want to get close to Rachel and her desire to flee will let him. His lust is enough to motivate him to help without additional violence beyond what the ghosts deliver. Should we worry about the village at all? The honest answer is no.

We discover this once the filmmakers let us in on the dark secret many in the audience will have already guessed. This is when the true stakes are revealed and the film can shift back to being about a brother and sister pulled apart. The reason the rules keep them in that house is so they can protect their secret from ever reaching the public. It’s shame that drives their family into compliance dictated by the same. Edward has bought into the need to preserve their reputation just as Rachel realizes freedom is worth whatever truth may bring. Tension increases and a true antagonist is formed, but I found myself treading water thanks to the climax feeling as though everyone was spinning their wheels with nowhere to go.

I thought Vega was very good in her role—the most well-rounded and complex of the bunch. Milner and Simon do the best they can with what they’re given, but it’s difficult to ever see a need for believing the former’s Edward can be redeemed (despite him earning sympathy) or the latter’s Sean can prove anything but a one-note guardian angel. As such The Lodgers reveals itself to be a beautiful gothic horror with a captivating truth mishandled in a desire to surprise more than resonate. It’s a story that so desperately wants to revolve around love and yet purity of emotion is never portrayed. Echoes arrive via lust and necessity while sacrifice tries to fit the bill, but it simply isn’t enough.

The Lodgers premiered at the Toronto International Film Festival.