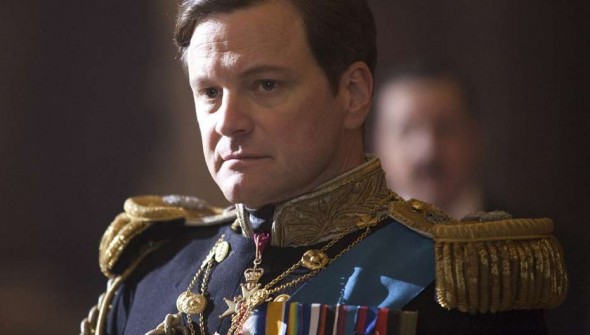 With only one press screening scheduled opposite the highly-buzzed Black Swan, I didn’t think I was going to get the chance to see Tom Hooper‘s The King’s Speech at this year’s Toronto International Film Festival. The day I was leaving the fine city, it was announced that the film had won the 2010 Cadillac’s People Choice Award, which meant a free screening that night. I was glad I stayed, since I was able to experience one of the best films of the year.

Scripted by David Seidler, Colin Firth plays the man who will become King George VI. With the recent invention of the radio he is forced to make speeches. The only problem is, he has a terrible stutter. He teams with speech therapist Lionel Logue (Geoffrey Rush) in an attempt to overcome this burden and command his country into World War II.

I know what you are thinking: “this is Oscar-garble catering to older Academy members.” I had slight reservations myself, but Hooper is able to craft a rousing crowdpleaser featuring two of the best performances of the year. The banter and developing friendship between Colin Firth and Geoffrey Rush is always hilarious and ultimately gratifying.

The duo embark on a number of unorthodox tricks to improve Firth’s stutter. Whether it be physical exertion, singing or furious swearing, these boisterous elements are the crux of their growing relationship. But just like The Social Network is not all about Facebook, The King’s Speech is not just about the stutter.

I found Hooper’s direction in his previous film, The Damned United , to be somewhat flat, mirroring a TV drama. Here, with the aid of cinematographer Danny Cohen, he brings an enormous amount of beauty and life to the frame. They experiment with some initially odd shot compositions that quickly turn into a stunning work of art. What could be described a slight fish-eye lens, there a number of exquisite handheld shots. One scene moving about a fog-filled street will leave you speechless.

The King’s Speech is indeed the first shoe-in Oscar contender of the year in all major categories. Best Picture, Hooper for Director, Firth for Actor, Rush for Supporting, Seidler for Original Screenplay, Cohen for Cinematography, Desplat for Original Score…the list goes on. If you have any reservations I urge you to throw them out the window. This is not only one of the most well-crafted films of the year, but one of the most inspiring.