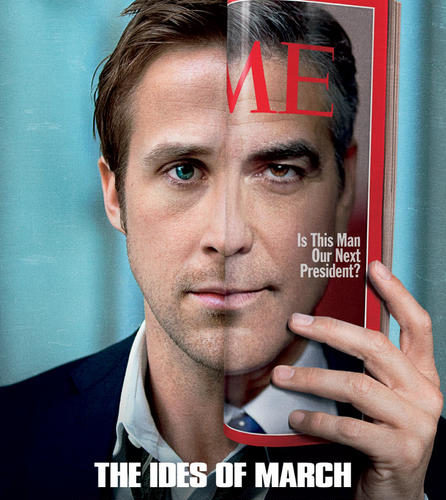 [TIFF Review] The Ides of March He may be crafting every decision as director, but George Clooney is in the shadows (and in a key scene, literally) as Governor Mike Morris and Democratic presidential candidate in The Ides of March. Taking the spotlight is his press secretary Stephen Myers, played by Ryan Gosling, whose gripping Drive is also in the festival. Based on Beau Willimon‘s play Farragut North, the political drama packs a similar intensity as Nicolas Winding Refn‘s crime thriller, but instead of arresting visuals, Clooney and writing partner Grant Heslov use the agency of dialogue.

That’s not to say Clooney and his cinematographer Phedon Papamichael (Sideways, The Descendants) come up short. There is a cool cleanliness to the palette, fitting for the clear, mechanical nature of the plot. This a tightly contained drama of twists and turns delivered by a class-act ensemble. After his romantic comedy turn in Crazy, Stupid, Love., being charmed by Gosling is expected at this point. When he is surrounded by players of this caliber, the exchange is even greater. With spot-on pacing aided by another wonderful Alexandre Desplat score, the first act is all fun and games, highlighted by a sexually heated bar conversation with the eager Stearns and the collected Myers. The many surprises found in the rest of the film are worth leaving in store, but the finest moments come when it seems like the end of the line for one character, only to have the perspective pulled back further.

By only following Myers, there is always the question of who is doing what when we aren’t looking. There is a quivering, late-in-the-game exchange between Myers and Morris that will have you questioning who may be creeping around the corner, only to have it tied up moments after the thought occurs. Like a taut game of Chess, all these players have a purpose, and the investment lies with who will knock over whom. When the game is over there is no greater message, but that doesn’t take away from the preceding fun.