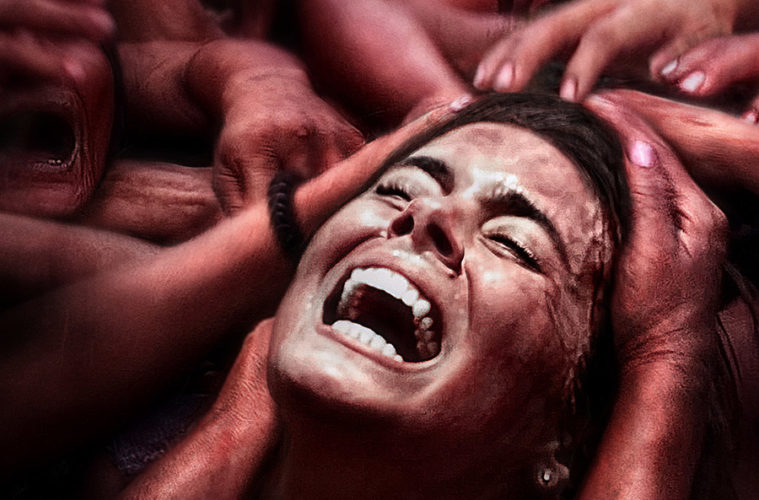 Returning behind the camera after six years of acting, producing, and becoming some kind of public personality, Eli Roth has attained a grand reputation with reasonably little directorial output. He seems sure of the (obviously violent) human behaviors he wants to document, yet not of the striking images necessary to compellingly do so, as is imminently apparent by The Green Inferno’s television-esque cinematography.

In wanting to align his newest effort with classic cannibal films from the Italian horror heyday — namely Cannibal Holocaust and Cannibal Ferox — Roth certainly gets one bit of homage right: having it take place in two uniquely different settings, beginning in New York with privileged college students and then whisking them away to the Amazon jungle, where they’re devoured by flesh-eating natives. The set-up to get to all the disembowelment and impalements sees a Columbia student, Justine (Lorenza Izzo), succumb to peer pressured to prevent the demolishing of a rainforest in the Amazon — in particular by the charismatic and impassioned (but obviously shifty) leader, Alejandro (Ariel Levy). But to truly take action, they, alongside a group of other young activists, head off to the jungle itself, where they seem to get their message unethically heard in an apparent social media triumph. Yet their success doesn’t last too long, as the group’s plane crashes in the jungle, only for them all to be captured and subsequently eaten by the very people whose home they were trying to save.

Aside from the clear highlight of Justine’s roommate — played by pop-star Sky Ferreira with a total strange deadpan skill (and who only appears in New York, anyway) — the characters are a mixture of obnoxious dudes and cipher chicks. But this is all familiar to Roth; structurally it’s of a piece with both his Hostel series and recent collaboration, Aftershock: idiotic Americans in a foreign land, where they’re naturally met with violent retribution for their behavior. If anything, comeuppance is Roth’s ultimate theme, his characters existing as nothing more than opportunities for it.

While young, pretty imbeciles placed as objects of carnage certainly isn’t unique for horror — in particular, slashers — what’s often too deeply read into them is conservative moralizing such as “don’t do drugs, don’t have sex, etc.” At this point, though, the repetition of these themes in Roth’s films come across as not just an entrancement of beloved horror tropes, but even a huff of his supposed moral superiority. Commendably, unlike many other fanboy directors who seem to occupy the genre, he doesn’t simply see it as a vehicle for recycling what he likes, but — at least to some degree — tackling what’s faintly suggested by tropes. Yet it’s unfortunate that the entire thing is kind of tedious, while its frequent gore is disappointingly unimaginative. While, possibly, the extremities of the aforementioned Italian cannibal films are hard to top (thankfully, no animal slaughter in this), that the evisceration of his satirical targets can’t be done with some real vigor sells the whole movie short. On the same point, for a location so rife with visual and sonic possibilities, the jungle lacks any real threat in that it never feels to be a character itself; Roth is more content in keeping company with the banality he seeks to criticize.

But in stranding his characters in a cage, cutting between their squabbling over fear of being eaten next and the natives’ seemingly harmonious existence — as well as nonchalant preparation of their “meals” — Roth reveals that he probably has more affection and respect for the cannibals. If anything, though, they probably have more skill for a true bloodshed aesthetic than he ever would.

The Green Inferno premiered at TIFF and opens on September 25th, 2015.