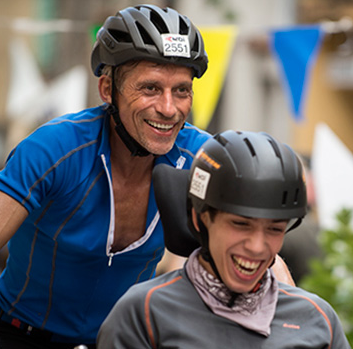 The Finishers is a wonderful, crowd-pleasing tearjerker from director Nils Tavernier, inspired by the real-life Hoyt family from Holland, MA. Fabien Héraud stars as Julien, a 17-year-old with congenital palsy who has a poignant sense of humor, including playing with his fellow wheelchair-bound friends and kidding around with his mother Claire (Alexandra Lamy). His father, an athletic contract repairman who repairs ski-lifts in the summer, Paul (Jacques Gamblin), finds himself unemployed. Always on the road with little to no time to bond, Julien wishes to spend time with his father.

Assigned a research project in class, he stumbles across an article on Team Hoyt. Feeling inspired, he attempts signs up for a local Ironman Competition, a 12-16 hour triathlon that includes swimming, biking and running, an amazing physical feat for anyone. Initially, Julien’s petition is declined by the Ironman governing body, so he resorts to sneaking into their offices and demanding to get in. After Julien’s class helps him make the case to his father the team begins training — a grueling regiment of running, biking and swimming together against the elements to prep for the competition.

Touching and wonderful, The Finishers is engaging throughout, with complex, well-drawn and genuine relationships. This is a feel-good sports film where the impossible happens: Tavernier’s direction doesn’t miss a beat. Some films in the genre are overtly emotional manipulative, but The Finishers earns its emotional beats through strong character development and great, simple storytelling. This is an impossible journey worth taking, with two stubborn guys: Paul, who is content and distant and Julien, who is pushing him along the way (even as Paul carries him). While it’s emotionally satisfying and thrilling as a sports movie, its training montages spend an awful lot of time on the road, during the Ironman. The competition is brilliantly shot at the real 2012 edition of the Ironman France, resulting in a rare breed of realistic sports film, and one that I expect will be warmly received by audiences. The film contains strong performances from all cast members, including Fabien Héraud (who is confined to a wheelchair in real-life) and his wonderful sense of humor.

Better than another recent French film about a man in a similar circumstance and his inspiring friend, The Intouchables, The Finishers explores a unique family dynamic that ultimately leads to triumph and redemption. While The Intouchables had several moments of emotional manipulation, essentially it was the classic story of an odd couple. Tavernier’s work is one that packs a physical and emotional punch with moments that leave you feeling numb, exhausted and elated alongside with Paul and Julien.

The Finishers premiered at TIFF. One can see our complete coverage by clicking below.