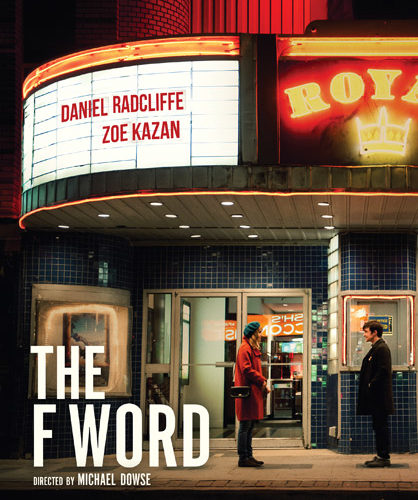 [TIFF Review] What If

There is something relatable to the awkwardly genuine smiles of two introverts connecting with an acquired humor, made funnier by the fact everyone around them doesn’t get the joke. And for Wallace (Daniel Radcliffe) and Chantry (Zoe Kazan), that’s exactly the case — the only problem is that she already has a boyfriend.

Through and through a Canadian production, from director Michael Dowse to screenwriter Elan Mastai to the playwrights of Toothpaste and Cigars, which he adapted (T.J. Dawe and Michael Rinaldi) to composer A.C. Newman (of The New Pornographers fame) to the setting of the same Toronto, Ontario streets I walked before my screening, What If is a quaint bit of real life infused with the usual rom/com quirks. It hits every note: unrequited love, unspoken jealousies, excessive friend intervention, and the ubiquitous grand gesture to turn all the starts and stops into one glorious moment of pure bliss. It also, however, subverts that too—to a point—by admitting how creepy, selfish, and stalker-ish those types of fairy tale ideas are. Part of 2008’s Black List of screenplays, the film follows English transplant Wallace as he’s finally ready to put behind a cheating ex from a year previous. We see him on the roof of his sister’s (Jemima Rooper) house—where he lives in her attic—deleting the apologetic/remorseful voicemail he probably listened to every day since their break-up. He then heads to a party at friend Allan’s (Adam Driver). It’s there that he does his usual wallflower shtick, until a quiet moment at the fridge with magnetic poetry brings the host’s cousin Chantry into his life. They hit it off with easy conversation and cutely absurd humor and eventually run into each other at the door when both decide to leave without saying goodbye to anyone.

He walks her home and asks about hanging out sometime to which she says yes, only to continue with the words “I didn’t mean to stay out this late, my boyfriend is probably wondering where I am.” It’s a gut shot that Wallace handles with grace until arriving back home to let go of the notebook page with her phone number so it can drift into the night sky and never be seen again. As fate often intervenes in such matters, it’s not long before they run into each other attending a screening of The Princess Bride alone. It’s here where a deal is struck to ignite a friendship devoid of all that discomforting sexual tension—what many rightfully like to label an impossible fantasy. We know they like each other and know that what they have right now is the tough part. Sure, Ben (Rafe Spall) is a great guy, and yes, Chantry’s sister Dalia (Megan Park) might want to use Wallace’s nice guy persona as a rebound to get over her last fling, but these two belong together. The question quickly becomes whether or not it’s in the cards, as an employment opportunity for Ben takes him to Ireland, a promotion could put Chantry in Taiwan, and the thought of simply moving on to avoid enduring another year of celibacy hits Wallace. And unlike most stories of this ilk, our star-crossed “likers” aren’t the sort to embark on an affair when other people’s feelings and lives are involved.

Their morality provides the perfect venue for awkward stumbling and brave faces when outside interference threatens to take one from the other. Allan and new girlfriend Nicole (Mackenzie Davis) do their best to let their adulterous ways rub off so the two friends can just kiss already, but while such maneuvers earn laughs they also work against intention by opening their targets’ eyes to the impossibility of their situation. Kazan is a pro at feigning cute aloofness while Radcliffe masters the bumbling, non-confrontational pushover with aplomb. You’ll want them to get together because you know they should, but after a while you find yourself simply hoping they at least stay friends. Their bond is just too strong to watch it sever. Dowse adds some nice visual flourishes of hand-drawn animation set to Newman’s music that we’re to believe Chantry created at her animation job, each little interlude projecting onto the scenery rather than simply superimposing above it. I’ve enjoyed his previous films, particularly Goon and especially Take Me Home Tonight, and find his ability to choose funny yet heartfelt scripts something worth noting. In a lot of ways I would compare his trajectory with that of Will Gluck’s, a parallel made more relevant due to that director’s work on Friends with Benefits. What If is in some respects a sibling to that film with an almost inversed concept while containing less laughs and a lot more sweetness.

Wallace and Chantry prove accessible as characters as Radcliffe and Kazan do as actors. Adorably cute the both of them, it’s much easier to put yourself in their shoes than Justin Timberlake and Mila Kunis. I’ll admit, it’s still hard to not see Daniel as Harry Potter, but I this regular Joe can help in getting me there. The two have a great rapport when riffing weird stream of consciousness jokes and they play the in-love-but-not aspects to perfection. Driver and Park inject some raunchy excitement to the mix while Spall and Park provide nice contrasts to who our leads are and want. Watching Kazan and Spall or Radcliffe and Park engage only shows exactly how much more Wallace and Chantry click—like PB&J and bacon.

What If is currently screening at TIFF and will be released by CBS Films in 2014. Click below for our complete coverage.