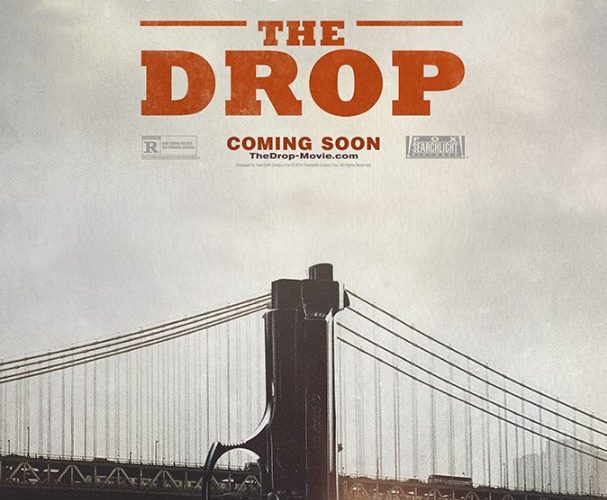 Finding international acclaim with the bleak, riveting 2011 Belgian drama Bullhead, director Michaël R. Roskam has returned with his Hollywood follow-up, the English-language crime drama The Drop. Written by a man who knows the genre well after Gone Baby Gone and Mystic River, Dennis Lehane (based on his short story Animal Rescue), all the ingredients are seemingly in place for another knock-out, including a high-caliber cast toplined by Tom Hardy, Noomi Rapace and the late James Gandolfini in his final role. While there are sequences that hint it might cohere to such promise, by the finale its familiarity and muddled narrative prevent The Drop from reaching such lofty heights.

Set in a non-descript Brooklyn neighborhood, we’re introduced to Bob Saginowski (Hardy, sporting a not-entirely-convincing New York accent), the bartender at an establishment that’s run by his cousin Marv (Gandolfini), and one indebted to a local Chechen gang that comes around to check up and terrorize its “businesses” on a whim. Used as a “drop” for money exchanges by the criminal organization, it’s clear that everyone involved has a few past sins, none of which are immediately made clear. To perhaps atone for these, Hardy’s character frequents a local church and seemingly has a good heart. This trait is explicitly indicated when he comes across a beaten pitbull in a garbage can. After rescuing the young animal, he connects with Nadia (Noomi Rapace), whose garbage can the puppy was found in, and although the relationship is initially ambiguous, Saginowski is now in the crosshairs of a local thug, Eric (Matthias Schoenaerts). After a hold-up at the bar finds $5,000 missing, tensions mount with the Chechen gang while Hardy’s character juggles his new canine, his complicated relationship with Nadia and increasing pressure from Eric. As these disparate strands eventually intersect, the result is mildly interesting but ultimately underwhelming.

While Roskam’s debut displayed a fair dose of originality and complete visual control, The Drop, aside from a few intense confrontations, is little more than a serviceable, surface-level crime drama. As one might expect, Gandolfini’s swan song is the most impressive performance of the bunch; as a conflicted patriarchal figure who was once on top, he feels at one in his now lower tier of the criminal world, giving at once an authoritative and bitter-sweet performance. Hardy’s character, who is the clear lead of the ensemble, is far too loosely sketched for the emotional investment Roskam and Lehane intend. As he waxes poetic about how there are “some sins you commit that you can’t come back from,” the script spouts themes of redemption that are rarely effectively felt. The most intriguing moment comes late in the game as Hardy’s character takes a welcome, unexpected turn revealing more of his backstory. However, Roskam and Lehane fail to follow through on this compelling thread, crafting an ending that’s all too crowd-pleasing in light of preceding events.

Cinematographer Nicolas Karakatsanis, reteaming with Roskam, is seemingly inspired by 70’s and 80’s crime dramas, with a cool palette and workmanlike approach for the most part, departing from the unnerving, intimate photography found in Bullhead. Aside from a few memorable exchanges and effective bursts of violence, The Drop could’ve use more imagination to distinguish itself from the pack.

The Drop premieres at Toronto International Film Festival and will hit theaters on September 12th. See our complete coverage below.