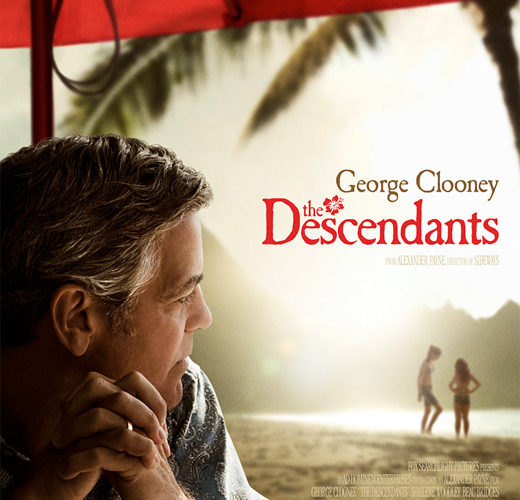 Delivering his most emotionally-mature film yet, Alexander Payne examines the importance of family with The Descendants. It is a welcome return for the filmmaker, who is able to present each situation with mellow humanity as he tackles big issues (loss, death, grief, love) in subtlety effective ways. Usually comfortable with his stoic and suave roles, George Clooney opens up like never before as Matt King, a father whose life is spiraling out of control in Hawaii.

His wife is on life support after a jet-skiing accident gone wrong. His younger daughter Scottie (Amara Miller) is in the highly influential stage of childhood and his oldest Alexandra (Shailene Woodley) has been sent away to a neighboring Hawaiian island in an effort to curb her rebellious ways. A sprawling portion of exquisite land has been in his family for generations, and he is legally entrusted with making the final decision on whether (and to whom) to sell the lucrative property to, or leave it be and lose it completely in a few years.

With all the these issues colliding, Payne and screenwriters Nat Faxon and Jim Rash never portray events with obvious, on-the-nose dramatic tones. By adding the smallest of personal touches, the film manages to completely subvert our expectations on how a certain exchange will be carried out. Consider a scene between Alexandra, her father and her goofy boyfriend Sid (played by Nick Krause, who tags along with the familial trio for much of the film). Driving home after a run-in at her grandparents house, Sid and Matt clash, leading the latter to have an angry outburst. Instead of ending the scene on that note with the irate feelings of our lead, Sid makes a funny off-hand comment and the mood completely brightens.

Filled with soothing hula-tinged music and lavish landscapes, this “easy” tone throughout feels out of place in our current tenser-the-better cinema marketplace. This lax mood could easily be mistaken for an ineffective piece of drama, but I have no doubt more views will reap rewards for this tranquil, reflective work. The tone is only strengthened by amiable performances. Woodley absolutely nails her transition from angst to adult, a great compliment to Clooney’s later confrontations. Clooney convinces with acute movements, whether it is slowly cowering is head in contemplation or fighting back tears. Payne explores the big themes mentioned above, but King’s motivation can be boiled down to reaching a catharsis. Is finding out the truth honestly worth it? What will happen when it occurs and what are its ramifications on others? This is all dealt with and Clooney navigates the answers with one of his finest displays of acting.

Qualms come with a slight struggle to get initial footing, with a few awkward dialogue choices and a long piece of voice-over, but Payne quickly sets it right as things kick up with a big reveal. Dealing with such ubiquitous themes, it is a work that could prove useful with time in your personal life. Rarely are people simultaneously going through everything King is, but as we think about our children, parents, death, legacy and more, Payne has provided one particularly keen perspective to look through.