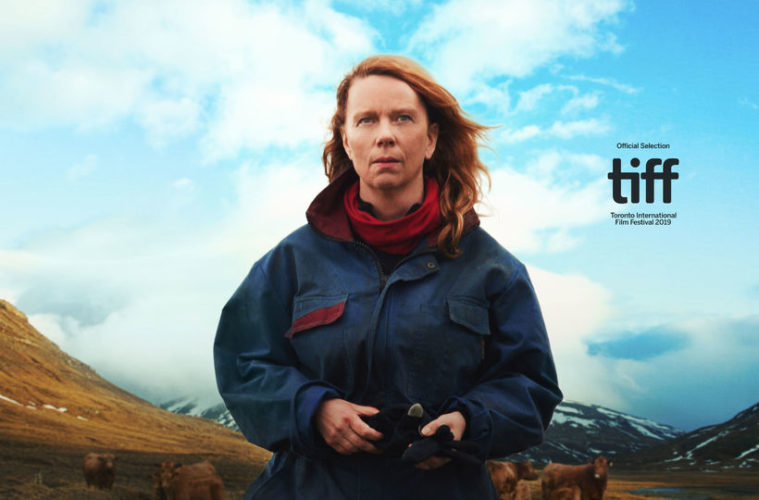 TIFF Review: ‘The County’ Shows a Quest for Retribution in Authentically Comical Ways

The devolution of a worker-owned entity into that which it was formed to combat probably occurs much faster than you’d expect. Things initially work like they should with successful profits and happy members. The establishment itself is also pleased because it sees little threat of anyone going outside its economic reach when the whole point of forming it was to get out from under the exorbitant costs of external resources. Vote an incoming director with greed in his/her heart that sees how good things are, however, and they’ll start finding ways to personally capitalize on that implicit harmony. Executive salaries are slowly raised, prices are gradually increased, and a new monopoly is eventually formed. And when members finally catch on, they unfortunately realize they’re too late to escape.

It’s at this point in the lifespan of one such co-op that writer/director Grímur Hákonarson introduces us to his latest film The County. Created to sustain an Icelandic community of poor farmers systematically being priced out of existence, the threats to maintain a status quo have arrived to silence any dissenters. Co-op director Eyjólfur (Sigurður Sigurjónsson) and his lackey Leifur (Hannes Óli Ágústsson) always seem to know when residents buy cheaper supplies elsewhere and are quick to blacklist them from any markets or businesses that they hold influence over—which is every single one. Play ball or go bankrupt is the message they deliver with a smile, buying up those who choose the latter and in turn strengthening their stranglehold on the area as untouchable dictatorial magistrates. The fear instilled throughout the county is palpable whether it’s of Eyjólfur coming for their jugulars in ways that carry a façade of assistance (to conquer problems he probably originated) or of losing the little profit margin they have as a unified front to collectively stay afloat. Only one resident lets her fear target something else: her survival. Inga (Arndís Hrönn Egilsdóttir) has never been a co-op proponent because she has always seen how it holds a knife to the throat of everyone beholden to its whims. So when she sees the debt mounting on her husband’s (Hinrik Ólafsson’s Reynir) family farm, she doesn’t wonder how Eyjólfur can save them. She spies the price tag on supplies from the big city that can work towards bridging the gap.

Since Reynir is a company man, her attempts to save money never go anywhere. Only after tragedy strikes does Inga realize there’s nothing more to lose before bringing the fight to Eyjólfur. It won’t be easy since the town is firmly entrenched under his thumb (willfully oblivious to this fact or not), but the levee has broken and she’s going full steam ahead regardless. Maybe her friend Friðgeir (Sveinn Ólafur Gunnarsson) will join the crusade. Maybe the dairy farmers’ association will back her play. Or perhaps she’ll merely become a pariah ignored by those who agree with her and laughed at by those who don’t. At a certain point, wiping the smug look of superiority off Eyjólfur’s face—even for a second—could prove to be victory enough. And that’s okay because every war is a culmination of its tiny skirmishes. As long as Inga’s actions are entertaining and worthy of our support, it will have been worth it. The word “entertaining” isn’t quite appropriate, however, considering a death is involved alongside plenty of other abuse inflicted as a result of mistruths and malicious intent spread by those in power. Rather than make light of these dramatic moments, Hákonarson is simply unafraid to show how they galvanize Inga’s spirit and quest for retribution in authentically comical ways. As the others are pushed into a corner, she stands tall. Eventually her determination and strength will spread to remind the others that they pay Eyjólfur’s salary. It’s on them to ensure he’s working with their interests in mind.

Egilsdóttir is fantastic in the lead role thanks to a relatable mixture of futility working a tireless job and ferocity when it comes to her refusal to kowtow to an establishment she knows is operating like secret government police. The frustration born from being on the right side of a battle nobody is willing to admit needs to be fought should be resonant for anyone in a non-executive position. At one point Leifur arrives unannounced to her farm to chastise her for buying fertilizer from Reykjavík only to leave fumbling his words after she asks whether he actually wants her to pay off her debt or not? There’s no better trap to expose someone’s true motivations than to present a solution to the “problem” that hurts his bottom-line. It’s thus easy to make a correlation from this very specific scenario to any other example of occupational-based oppression. What will it take to open your eyes and acknowledge that you’re being exploited despite having larger numbers and the means with which to throw your weight around? If you’re like Inga’s neighbors who aren’t in debt and scraping by with enough money to live a moderately comfortable life, you’re going to guard that contentment by refusing to rock the boat. By the time it’s your turn to really be hurt by the system, however, it might be too late to do something because those willing to throw that wrench are gone. These people are being bled dry just slow enough to make them think they’re safe.

The County shows that it only takes one person to beat the drum for change to occur. But it also posits just how sinister the opposition can be when its livelihood of means is threatened in the process. I think Hákonarson could have gone further with this aspect of the film because there’s some real suspense built as far as who should be blamed for the tragedy that sparks Inga’s crusade. While he errs on the side of guilt via psychological and emotional means, I really thought the path was being laid for something more concrete. And maybe that was intentional. Perhaps our assuming that truth without spelling it out is part of the bleakly fatalistic message he provides. Not every Goliath can be felled by one rock.

The County screened at the Toronto International Film Festival.