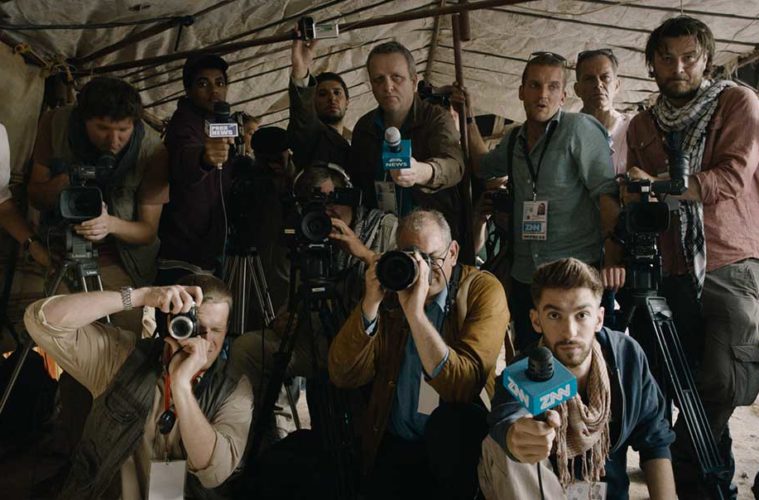 [TIFF Review] Thank You For Bombing

An angry satire, Thank You For Bombing, the latest film from Barbara Eder (Inside America) takes dead aim upon the industry of journalism in war zones. No one is sacred in Eder’s eyes as she satirizes the veteran reporter haunted by demons of the past, a pretty young correspondent who will do anything for a story, and a rouge reporter in search of a war. The waiting is the hardest part and they kill the time in a number of ways from Zumba to opioids.

Told in the three symmetrical stories that intersect in the film’s third act, the first finds an Austrian reporter, Ewald (Erwin Steinhauser) on his way to Afghanistan. Capturing a ghost of his past he discovers a man, now flying under a German passport that may or may not have been involved murder of his cameraman in Bosnia. Apparently this is not the first episode for Ewald, who is told to move on and board his flight. Eder mixes tones masterfully in this segment: finding humor in airport architecture while crafting a tense thriller that could stand alone.

The film’s second segment, Fitz and Bergmann, is less successful. It plays as a cruel indictment of Lana (Manon Kahle) who purposely is cast to look like CBS reporter Lara Logan. Lana kills her time in Zumba when she’s not out chasing stories. We learn she’s frequently harassed by men in the square; regaining her composure on camera she tells them to “fuck off” once the report is brought back to the studio.

The Lana story is perhaps the film’s cruelest passage by design, and for reasons that harken back to the Lara Logan story. In this passage, the biggest story of the moment around the US military outpost is the burning of several copies of the Quran, which generates controversy. While proudly and unapologetically taking a piss in the men’s only bathroom Lara discovers cryptically written on a bathroom stall: “Fritz and Bergman are innocent.” Going to great lengths to get the story, Lana alienates herself while breaking the rules. She’s told to stay in her lane after confronting a general who believes he’s sitting down for a puff piece. A criticism that’s perhaps too on-the-nose finds Lana and a line of reporters announcing the arrival of Britney Spears to play a USO show. Beside her are glamour queens turned reporters and most are her Zumba classmates from rival stations.

Where this story goes is a shocker by design but I admire Eder’s ability to commit. She doesn’t shy away from a critique that is fair (especially since American Kirby Dick’s Invisible War shed light on this very topic), however the power exchange is one ugly cost of doing business.

Cal (Raphael von Bargen), the film’s third protagonist, was once a good journalist. A battle vet, he lives hard, partying until the war breaks out – that is until he becomes the story and finds himself on the outs. What follows is an absurdly comic trip back to the airport that evolves from comedy to existential tragedy.

Thank For You For Bombing takes on the news media and the 24-hour news cycle from an international perspective and it’s a frustrating look at the sausage factory. As a mosaic, it is thought provoking and engaging even as it is muddled with a message that’s not always as crystal clear as it is when reporters are forced to arrive on Britney’s arrival to entertain the troops. Three very different stories combine in one rich study of time and place. Written in collaboration with the late, great Michael Glawogger, himself a filmmaker who would go anywhere for a story (which ultimately lead to his death from malaria last year), Thank You For Bombing is uncompromising as it hits targets both easy and abstract.

Thank You For Bombing premiered at TIFF.