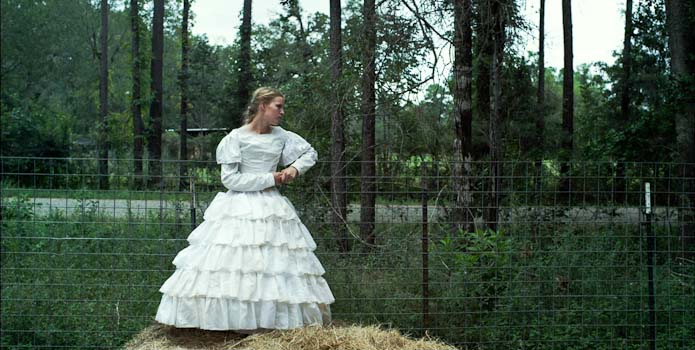 Texas possesses a uniquely American mystique defined by guns, shoot-from-the-hip politics, and a still wild frontier. The country and its proud people must seem all the more alien to an Italian-born transplant like filmmaker Roberto Minervini, who examines two of the Lone Star State’s young citizens in his latest film. Through his objective gaze, the viewer vicariously experiences a world that seems so foreign, and yet is so close to home.

The neorealist drama Stop the Pounding Heart completes the director’s Texas trilogy, which began in 2011 with the road movie The Passage, and continued the following year with the white trash 400 Blows homage Low Tide. Part-documentary, part-fiction, the work follows Sara Carlson, the 14-year-old daughter of devout Christian goat farmers, and Colby Trichell, an asthmatic cowboy obsessed with riding bulls. The two non-professional leads and their families basically play themselves, and are filmed in their own homes, which lends a distinctly authentic vibe to the story. The approach allows Minervini to create an absorbing coming-of-age portrait, in which his unintrusive camera lingers on its subjects to fully capture the awkwardness of sheltered adolescence. The experience is heightened by the unscripted dialogue, much of which is made virtually unintelligible by Sara’s prominent speech impediment and Cody’s mumbly drawl. As expected with rural Texans, religion becomes an overriding theme, and as the teens’ everyday lives quietly unfold, it becomes more apparent how their beliefs determine their fates. Homeschooled and cut off from the world by the lack of modern conveniences like television or internet, Sara appears particularly bound by her parents’ strict interpretations of scripture. In many scenes, her mother preaches the virtues of wifely submission, and encourages her daughter to marry without dating first, implying that such an enjoyable pursuit could only lead to sin. From that perspective, the girl’s many responsibilities, such as caring for her many young siblings, look more like training for motherhood and, even more so, a distraction from inevitable temptations.

One of those temptations is embodied in Colby, whose approach to worship differs dramatically from that of the pure Carlsons. While Christ permeates every aspect of their day-to-day lives, from breakfast Bible study to nightly prayers, Colby’s tattooed, redneck clan bonds around a keg and a couple rounds of skeet shooting. Religion to him is a plea to God for victory in the arena, and, later, something adopted when the rowdiness of youth has taken its toll. His undisciplined ways are source of conflict for Sara, who keeps herself at a distance during their few brief exchanges – in an especially telling moment, she even goes as far as to refuse his hand when he offers to help her over a mud puddle. For her, there’s no room for fun or pleasure, no matter how innocent, on the path to becoming a good Christian. Adding to the physical nuance, Minervini develops his characters through intimate close-ups that betray their internal struggles – though she barely speaks a word, Sara’s confusion and conflict of faith reveals itself with each long, patient take. While much of the plot is communicated in this subtle way, some scenes would have benefitted from a bit more context. When Colby and a female bull rider discover a large cross burning in the woods, the jarring, dreamlike image clashes with the film’s real-life look. In comparison, the attempt at symbolism, and, possibly, a shoehorned-in nod to southern racism, comes off as over reaching and unneeded.

As Colby’s physical rite of passage in rodeo coincides with Sara’s more complicated spiritual journey into womanhood – where marriage and children await her – the film becomes more than just an examination of gender roles in the Wild West. By immersing the audience in the characters’ world, Stop the Pounding Heart becomes a sensitive, lovingly crafted illustration of the relationship between culture, faith, and identity.

Stop the Pounding Heart is currently screening at TIFF. One can see the trailer above and our complete coverage below.