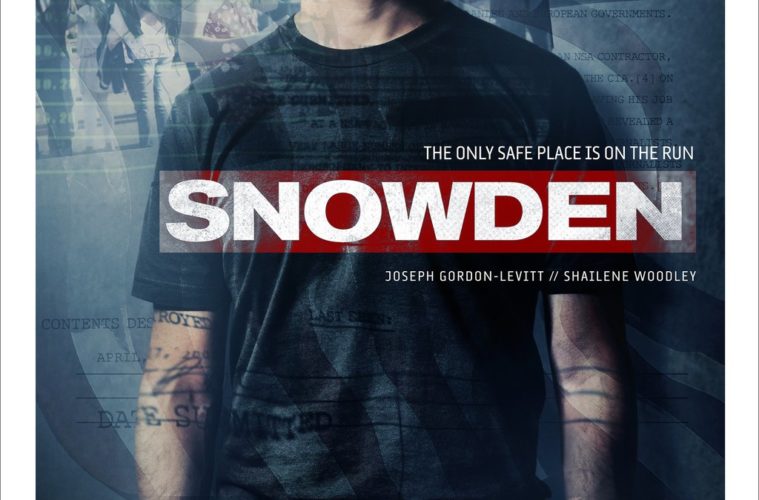 Remakes repackaging foreign films for American audiences are justifiable if done correctly. I’d hope our movie-going public would willingly read subtitles and experience the original artist’s vision, but we don’t live in a utopia. Dramatizing non-fiction work is equally acceptable in specific circumstances because a narrative built from talking-head interviews is sometimes easier to parse and appreciate than those disparate accounts alone. Where I take umbrage with this trend is when Hollywood uses a documentary –an Oscar-winning documentary, no less — and literally reenacts it for a fictionalized biopic. To watch Citizenfour is to be enveloped in a tense journey with real careers and lives at stake. To watch Oliver Stone’s Snowden take Laura Poitras’ film and artificially deliver what she did authentically is to wonder about its point.

Stone has strong opinions and isn’t afraid to release them into the world, no matter the backlash. This project wasn’t a cash grab — he believes in the subject matter, and its anti-government themes align perfectly with his oeuvre. But it’s only been two years since Citizenfour. We live in the 21st century, where that film is easily accessible and Edward Snowden’s story ubiquitous. So what’s the goal of making this film now, besides added glory for the whistleblower — a way to humanize him above his divisive traitor / hero legacy? It will potentially serve as a way to showcase Snowden’s (Joseph Gordon-Levitt) past, girlfriend Lindsay Mills’ (Shailene Woodley) role in his evolution, and their growth together within a tragic love story. That’s not necessarily known as Stone’s wheelhouse.

He and co-writer Kieran Fitzgerald approach the structure this way, though, culling together tales and conversations from two books and the aforementioned documentary so we can understand Snowden’s trajectory. Rather than depict his love as pure, however, the filmmakers use it to infer upon his staunchly blind patriotism changing in the matter of a decade into warranted cynicism. They even put in a scene where Mills jokingly exclaims herself as his initial nudge into liberalism. What should be a cutely funny sentiment ends up convenient thanks to an abbreviated runtime needing to cover too much ground. She becomes that pawn opening his eyes and little else. What’s worse is that, outside this ideological transformation, there’s no indication he loves her more than career or country.

He’s intriguingly displayed in a heroic light as far as the whistleblowing goes, but hardly sympathetic in more personal aspects. He never puts Mills first — not even when giving her veto power to reject a relocation. Her parents disapprove of how he treats her, he’s jealous beyond the paranoia of what he knows provides, and he shows signs of addiction by not taking epilepsy medication (an addiction to work and staying sharp rather than keeping the streets safe while behind the wheel of a car). I actually like this notion, because Snowden is portrayed as a flawed man. We can commend his idealism and intelligence in disseminating the information he stole, but we can also agree he’s a selfish human being with a hero complex to boot.

This makes the character captivating despite knowing what happens. We need this because Stone letting him constantly point at himself as the only person able to stop our government’s corruption gets boring. Nicolas Cage’s Hank Forrester exists simply to give an example of what happens when you speak out. Timothy Olyphant’s Geneva CIA Agent arrives for no other reason than providing the prototypical soldier CIA bigshot Corbin O’Brian (Rhys Ifans) covets. Will Snowden follow in the career-suicide footsteps of an idol or the morally compromised success of Mr. Cool? These are his choices. He’s not allowed to be himself because the film doesn’t let us see him as anything but who he becomes to please. Or maybe Stone just doesn’t care about making him three-dimensionally complex.

Snowden becomes a cypher, a vessel Stone can use to ensure his audience understands that no one is safe. Sure, he hits all the major life notes, but doing so becomes tedious when the character never ceases to fall into identical traps. He doesn’t learn or adapt. He just grows jaded. And when he decides to speak to the press he does it alone, breaking Lindsay’s heart one more time. There’s a way that Stone could have portrayed him selflessly in these actions, but maybe that’s not who Edward Snowden is. Because I already knew the endgame, the only thing I could invest in was his lack of humanity and perhaps empathy. He knows he’s the smartest guy in the room and does whatever he wants.

So maybe this means I liked the film for reasons I shouldn’t. It doesn’t portray the suspense-filled notion of journalism and confidential sources as Citizenfour, but does deliver a depiction of a conceited jerk putting the world on his shoulders. He should have quit working for the government years before he created programs that helped them do the things for which he blew the whistle. To a certain extent this film shows that it was guilt and not righteousness at the back of his actions. That’s a fascinating way to tell the tale when anyone else would have embraced an agenda to defame him or laud him without the story’s other side. Stone declares war on everyone, including Snowden.

Snowden’s actions might be heroic, but he’s no hero here. He’s the lightning rod for a continuing conversation. Hell, there’s always been a Post-It flag covering the lens of the camera on this Chromebook. Snowden therefore becomes a cautionary tale about our capacity to forever delude ourselves into believing everything’s okay, not a biography. It’s a film that shows Republicans and Democrats both engaged in illegal activity and how who we elect next will potentially make things even worse. Stone doesn’t care about Snowden as much as he does the ramifications of what his employers accomplished. He’s focused on the future, fearful the next person over-stepping boundaries is Donald Trump. This doesn’t make the film a resounding success, but it does make it fascinating.

Snowden is currently playing at the Toronto International Film Festival and opens on September 16.