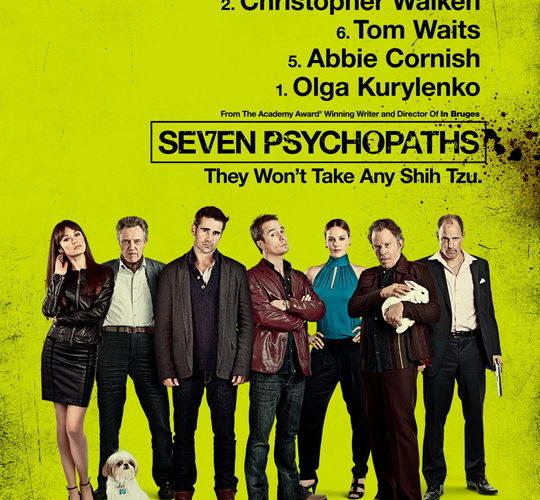 It takes a deranged mind to be this fascinated with psychopaths, let alone seven of them. Colin Farrell’s Marty gets to quite literally take his work home with him, a screenwriter whose BFF, the aptly named Billy Bickle (Sam Rockwell) – perhaps the son of Taxi Driver’s Travis Bickle – is in on a dognapping scheme with Hans (Christopher Walken). They snatch the wrong Shih Tzu off of Sharice (Gabourey Sidibe), and so begins the wild ride.

Luckily for Marty, spurred by his friendship with Billy, his drinking, a recent breakup with the lovely Kaya (Abbie Cornish) and a gunman running around LA taking out killers (denoted as “Psychopath No. 1” for our reference) he takes on ‘Seven Psychopaths,’ a screenplay whose first draft contains a Buddhist psychopath who practices non-violence (later it evolves into a Quaker, proving as you’ll see there are no original stories in Hollywood or indiewood anymore). Indeed, a deranged mind is at the helm, one Martin McDonagh (In Bruges, Seven Shooter), who’s known for effortlessly mixing violence, drugs, humor and midgets in the same narrative pot.

Psychopaths moves McDonaugh from his native Ireland to the US, opening up the ensemble to include Tom Waits, who shows up at Marty’s answering an ad Billy takes out in LA Weekly asking for psychopaths to come forward to share their story, to Woody Harrelson — owner of our MacGuffin Shih Tzu. McDonagh, whose background is in theatre — itself often a more reflective medium than cinema — is aware of what he’s doing and often is in full command. On general principal a film whose lead character is a writer enters with a certain level of conceit, evoking one of my favorite lines from the Last Days of Disco, “of course it’s formulaic, it’s a formula” – keep adding psychopaths, seven seems like a lucky number, and one screenwriter left to tell their tale, and you can do anything

Without limitation and with an awful lot of set-up, the film leads to two very telling lines – I will not tell you who they are spoken by, but they include “The movie ends my way” and “You’re the one so interested in psychopaths, it gets tiresome after a while.” Indeed we see the home lives of these psychopaths, what’s important to them (apparently a Shih Tzu, but not their women, another fact revealed in Marty’s screenplay within the film). If this sounds exhausting, it actually isn’t. Ultimately, McDonaugh remains in control, keeping the energy level up. Here is a film that knows exactly what it’s doing and sets out to do it instead of showing off.

I liken this to the great Blues Traveler’s song “Hook,” in which they can say nothing at all, as long as they sing with inflection — it’s the hook that brings you back. The seven psychopaths keep going with what is in the grand scheme of things a deranged bromance, Natural Born Killers by way of Judd Apatow with a dash of 2 Days in the Valley throw in for good measure. It’s like having dinner at a hibachi restaurant — all the elements are being prepared and cooked before our eyes, and the outcome is satisfying.

Seven Psychopaths is screening at TIFF and lands in theaters on October 12th.