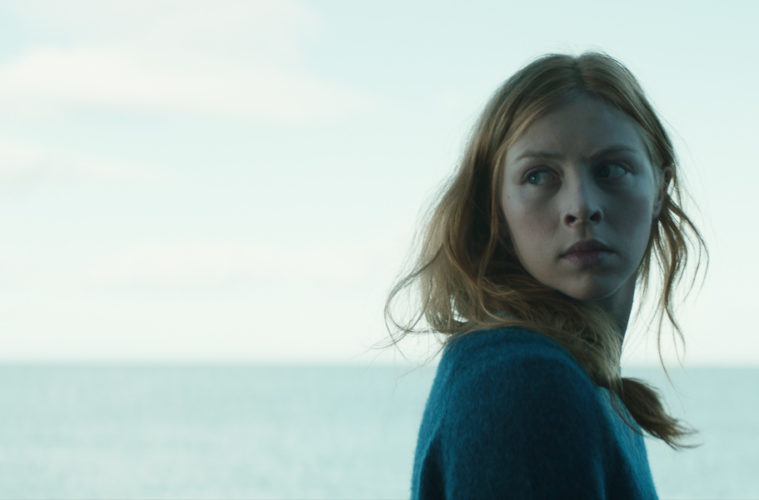 Ever the scientist too enthralled with work to bother making friends, Siobhán (Hermoine Corfield) will stop at nothing to gaze upon a school of fish whose swim pattern might be crucial to her research. This means bumming onto a trawler owned by Gerard (Dougray Scott) and Freya (Connie Nielsen) thanks to an acquaintance with a crush (Jack Hickey). The fishing couple is short on cash (late payroll the reason Ardalan Esmaili’s engineer Ahmed is about to quit), so they take her money, agree to one scuba dive, and hold their breath upon realizing red hair (bad luck) exists under her hat. Thanks to a reckless maneuver by Gerard in an attempt to find a fish windfall and keep their vessel afloat, however, this uneventful adventure becomes anything but.

That’s how writer-director Neasa Hardiman gets her ragtag crew aboard a rusting heap of metal to find themselves in a nautical exception zone as easily a source of supernatural monsters and scientific anomalies as the titular sea fever psychosis they’re all at risk of forming. There’s a lot of greed, opportunism, and hubris at work with a splash of stubborn denial when the unexplained becomes their only logical explanation once chaos hits. First comes a collision followed by the physical deformation of the ship’s wooden hull. Then a biological discovery unlike any humanity has seen that only Siobhán has the wherewithal to troubleshoot for answers. Unfortunately for them, it’s not long before this seemingly passive dynamic between man and beast escalates into an assault with extinction-level complexity.

I’m not talking about your usual creature feature, though, as Hardiman takes special care to ensure her narrative is steeped in real world plausibility. Even so, she’s also not overtly stating that what we’re about to see is explainable. Just as Gerard and Freya’s trusted companion (Olwen Fouéré) talks about lights in the water being a mythical Goddess’ hair, fact and fiction often have overlap. This is why the boat’s captains are keen to drop their net and commodify nature’s wonder as only down on their luck capitalists can. They see their predicament as one with a potentially lucrative outcome while Siobhán can’t help filtering each new development through the prism of tragedy. She knows we aren’t the top of the food chain. She respects Mother Nature’s wrath.

The way the suspense unfolds reminded me of Danny Boyle’s Sunshine—subtler and without the high octane finale. A problem arises and everyone takes it lightly (save one) even after irrefutable evidence says they shouldn’t. The sea fever is somehow so prevalent a possibility that the smallest shred of deniability leads Gerard and Freya to chalk things up to paranoia instead. It’s interesting that Hardiman keeps this line of uncertainty going well after we see what the creature they’ve encountered can do because it gets to the point that mankind will talk itself in circles if it means preserving its self-interest. When the impossible is proven possible, we’ll still go out of our way to pretend it’s not because fear of the unknown is better than our imminent demise.

That the film possesses realistic special effects (the beast and power its drive to exist wields regardless of violent intent) and affecting performances is a boon because the plot itself delivers little we haven’t seen before in other parasitic horrors within confined spaces (see Alien). The animal reacting as it should in nature, however, allows Siobhán the chance to discern their best options for escape while the anxious humans confronting their mortality descend into aggression. It’s no surprise those desiring to capture it as a trophy are those willing to roll the dice by getting home and worrying about contamination later. Emotions implore them to return to their families while Siobhán’s pragmatism allows her to see that staying away is the only guarantee their loved ones remain safe.

Confrontations abound as a result because it’s easy to hate Siobhán for keeping them in peril—she doesn’t have anybody waiting for her. Their selfishness attempts to label her selfish and they push back with all their might until revelations prove the opposite is true. Everyone’s shelf life decreases with each new tragedy as their manic urges escalate in relation to their claustrophobic dread. It’s not therefore long before we recognize the perpetual blind spot where our footprint on this Earth is concerned. A reactive species hell-bent on survival, we treat self-defense as a declaration of war by default. Rather than humble ourselves when Mother Nature’s mere existence manifests as an attack, we become hostile enough to be more detrimental to ourselves than anything She could ever do.

Sea Fever premiered at the Toronto International Film Festival and opens on April 10.