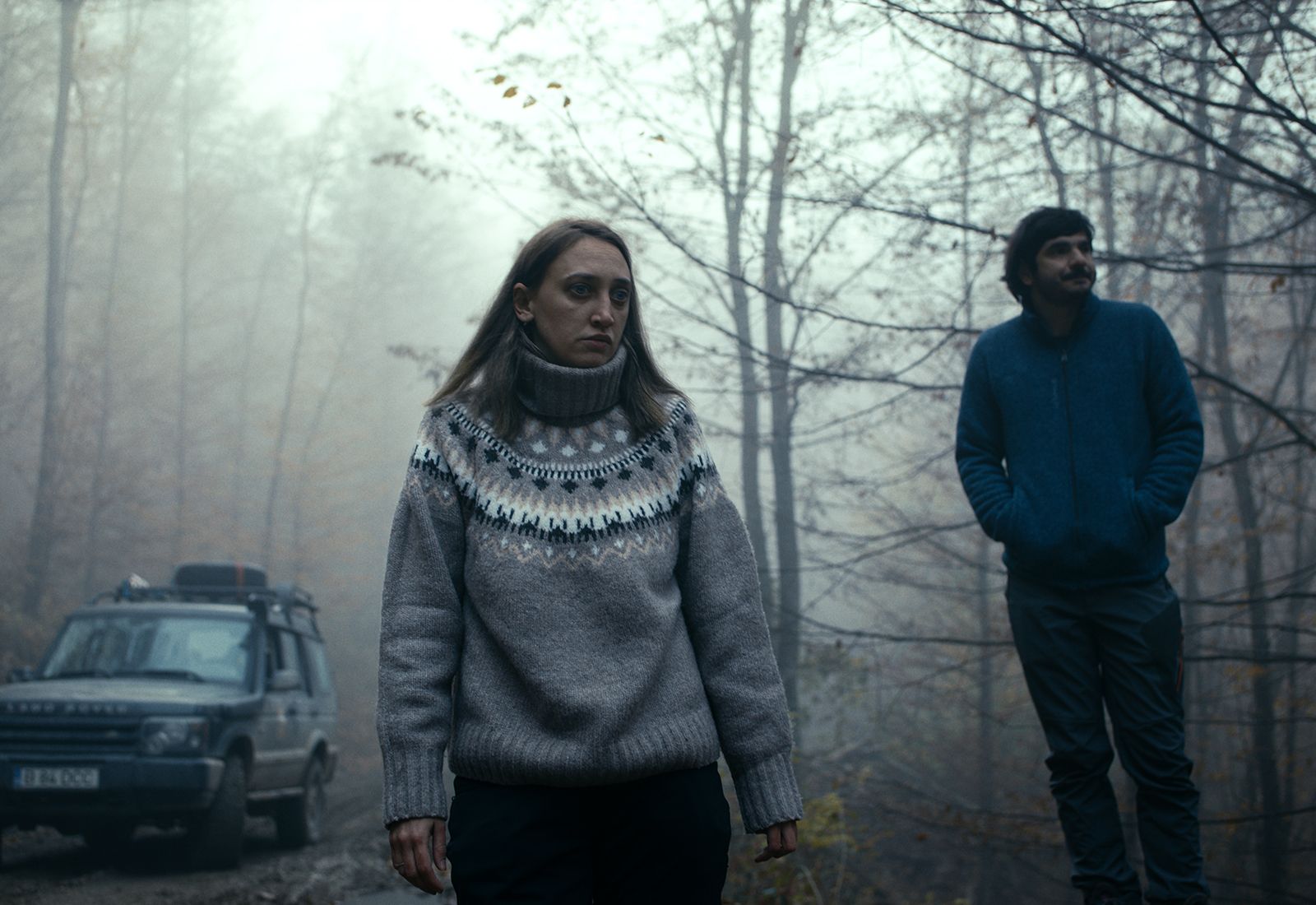 The title of Radu Muntean’s latest film comes from the remote Transylvanian village and surrounding area in which its unlucky protagonists find themselves stuck. Not much is known about Maria (Maria Popistasu), Ilinca (Ilona Brezoianu), and Dan (Alex Bogdan) other than all three being colleagues who take an annual Christmas trip to the town, handing out gifts and essentials to villagers. While the more populated areas have enough activity, it’s the muddy backroads and dark forests the trio find themselves stuck in, the kind of place where cell phone signals vanish and things go bump in the night.

For a good chunk of its runtime, Întregalde uses a horror blueprint, playing on familiar tropes while keeping intentions hidden. Take one look at the film’s poster and you’ll get the idea: an abandoned car in the dark, the interior light on but no one inside, the windows fogged up, and the title frantically scratched on the door. The genre’s a fitting match for someone like Muntean, given his tendency to let scenes unfold in long takes doubling as high-wire acts, the camera’s minimal presence building tension with each passing second. There’s an expectation of the other shoe dropping at any moment, a tactic that worked well in prior features One Floor Below or Alice T. It turns out that, when stranding people in the middle of nowhere with just the elements and suspicious townsfolk around them, Muntean’s little goes a long way.

But like most horror films, its mysteries can’t stay hidden forever, and that’s where Întregalde falters. (Fair warning: if you don’t want to know more, stop reading here.) While Maria, Ilinca, and Dan drive through a forested area of unpaved roads, they pick up Kente (Luca Sabin), an old man who asks them to drive him to a sawmill. It plays like a backwoods-horror setup until Kente turns out to be nothing more than a senile eccentric who has no idea where he’s going. The car gets stuck in a ditch, Kente darts into the night, and Maria goes to find him despite friends’ pleas to stay put. It’s not their survival skills that are put to the test as much as the limits of their generosity.

A disappointing destination after such an involving journey. Muntean wants to probe the thorny elements of the upper class helping out the underprivileged, but his message amounts to self-interest taking precedence over altruism in extreme circumstances—a basic criticism of liberal self-righteousness that’s been made all too often, and his approach to this point is little more than flatly stating it. In the film’s opening, Muntean observes a young girl asking her mother if they can take a stray puppy home, only to have the idea immediately shot down. The exchange turns out to be a sort of thesis statement, except instead of building upon it, Întregalde feels content to just repeat itself.

In prior work, Muntean looked at characters making counterintuitive choices and elided psychology altogether, inviting viewers to make their own conclusions. With Întregalde, characters remain one-note and function as pawns in a single-player game. It may think it’s clever in how it subverts horror tropes to reveal a moral villain instead of a literal one, but there’s little enjoyment in replacing a monster with a scold.