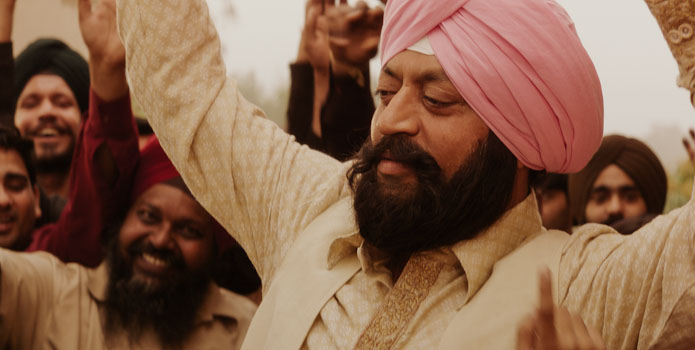 [TIFF Review] Qissa: The Tale of a Lonely Ghost

I honestly have no words to help gain my footing because this film exists on a level beyond my comprehension. I don’t know if that is good or bad—probably alternatingly both—but the result is definitely something uniquely its own. A tale of rebirth, honor, fidelity to family, and the loss of identity, Anup Singh‘s Qissa tackles an insane subject matter so realistically tragic that its head-scratching shift to fantastical and spiritual allegory can’t help but take you aback. Right when you’ve maybe wrapped your head around the central conceit, Singh blindsides you once more with a revelation that simply isn’t feasible in the context of verisimilitude. The title is Arabic for “folk tale,” however, so I guess I shouldn’t have been surprised there would be enchanted liberties taken with reality. I’ll warn you right now, reading the plot synopsis before sitting down to watch still won’t prepare you for its unrelenting depiction. Set shortly after religious violence separated the Punjab region in two with the delineation of Pakistan and India in 1947, we meet Umber Singh (Irrfan Khan) as his village readies to uproot from the former and start life anew in the latter. A Sikh now without a home and country, his one chance at purpose is fathering a son to carry on his legacy. With two daughters already born, the hope is that his pregnant wife Mehar (Tisca Chopra) will bear him a boy on the eve of their diaspora. Dejected at the appearance of another girl, the family spends the next four years building a home before trying again.

Here is where the first unconscionable act occurs as Umber enters the birthing room of their fourth child and takes it from the midwife as soon as it takes its first breath. Mehar knows in her heart she’s had another girl, but her husband blinds himself into believing a son has arrived. Yes, he emphatically declares a boy has joined their family the minute his fourth daughter is born. Fast-forward a few years and we see a child dressed in male’s clothing with a bun of hair atop his head. Named Kanwar, he’s a child told to stop crying like a girl and be a man when his sisters play rough. Umber’s declaration wasn’t a joke, no one talked sense into him, and we instantly realize no good can come of any of this. Every problem inherent to a female being raised as a male crops up in due time whether the issue of muscle physique, hiding a blossoming chest, dealing with puberty, or accepting the farce of a childhood accident rendering an adolescent Kanwar (Danish Akhtar) a eunuch. And it only gets worse as he grows older (ultimately played by Tillotama Shome) with hormones and romantic inclinations increasing alongside his supposedly unnatural sexuality. But everyone is in on the ruse and deluded to the fact it’s reality. Umber now has his son to hunt bears with and teach to drive as everyone rejoices at his turban ceremony like nothing is amiss. Only when a gypsy girl named Neeli (Rasika Dugal) inserts herself into Kanwar’s life as more than a friend does the inevitable necessity for truth prevail.

Beneath the changing gender roles and psychologically challenged attitudes needed to condone something this impossible to occur is the metaphoric idea of identity and whether or not we’re who we’re born to be or who we are underneath circumstance. For Umber and the Sikhs, everything they ever knew was ripped from them in war’s aftermath. Their home became uninhabitable, their customs unwanted on the land that taught them their faith. To start fresh is never easy, but doing so in a culture where social conduct is sacred can’t help but impact those failing to comply. In Umber’s mind a son was the only answer he could afford; the only gift to God he could provide to earn back meaning to his life. Sometimes we go too far to live up to expectations out of our control. From here Qissa grows increasingly darker as tension ratchets up to an unbearable level because we know how intolerable this society will be once the truth of Kanwar’s sex is revealed. The dynamic between he and Neeli strains quickly as the secret becomes hers to bear and the violent conclusion to this second act is actually a welcome turn of events despite its tragic end. The aforementioned spiritual magic then takes the final third into a realm masked by changing façades I couldn’t help but compare to the idea of Hindu Gods adopting avatars to walk the earth. The idea of who we are manifests itself through a physical transformation simultaneously unsettling and understandable. The film’s subtitle The Tale of a Lonely Ghost takes meaning and Umber’s wish for immortality results in immense sacrifice.

Anup Singh has crafted a film that can’t help but spark conversation in its depiction of psychological abuse and unyielding hubris in the face of existential crisis. Khan gives a powerful performance both pitiable and abhorrent in his actions, where “good” intentions can never offset the turmoil he causes. No matter how effective his living embodiment of the patriarchal concept of legacy, it’s the women who overtake him with heart-wrenchingly unforgettable turns. Whether the pent-up self-loathing Chopra eventually lets free, Dugal’s cognizance of walking into a invisible prison whose escape is permanent familial disgrace, or Shome’s unfathomable internal struggle between masculine and feminine, you will at some point want to stop watching the never-ending stream of tragedy. Love it or hate it, its ability to conjure such intense feelings either way deems it a success.