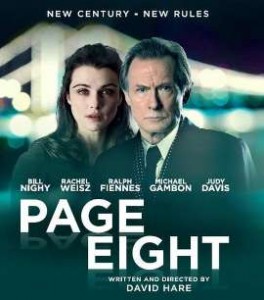 David Hare‘s directorial debut Page Eight sits somewhere between All The President’s Men and The Parallax View in the land of political conspiracies, both real and imagined. Starring Bill Nighy as worn-out bureaucrat Johnny who’s job security in the changing UK government remains strong thanks to his friendship with Benedict Baron (Michael Gambon), a big wig within the MI-5, Hare has made produced a solid tale that develops an unfortunate case of identity crisis as it plays out.

This is a neo-noir that wants to be a message film that wants to be, well, something a bit more cheery. For our Johnny, there’s the mysteriously vulnerable, honest next-door neighbor, played by the beautiful, sensual Rachel Weisz, a mysterious government document Baron’s purposely spread to all those willing to read (hence Page…Eight) it and a messy family life about to go up in flames (future movie star Felicity Jones, in the upcoming indie romance Like Crazy). Like any great noir hero, must stop looking out for himself and come to the crossroads of a life that never amounted to much more than a hill of beans.

Nighy, of course, is perfect for the role, channeling much of the same from his spot-on turn as a disenchanted bureaucrat who falls in love in the HBO film The Giri in the Cafe. Gambon is his match, the two creating a deep relationship off only a few choice exchanges, courtesy of Hare’s superb hand.

As a filmmaker, the veteran scribe also knows what he’s doing. His framing is simple but confident. He’s aware that the strengths of the film come from his pen and from those speaking his words. Weisz is a joy to watch, all the way up until the moment her character is revealed as little more than a catalyst for Johnny’s redemption.

And while no exchange between two characters feels forced, transitions from scene to scene, plot point to plot point, sometimes feel anything but. Consider a subplot involving Ewen Bremner as Johnny’s inside-man journalist. In what amounts to 2 and a half scenes, we learn just enough from Bremner’s character to understand his place in the narrative but never enough to invest anything in his appearance or the words that come out of his mouth.

Moments like these meshed with an ending that plays as squeaky clean, and you’re left with a solid first effort from a scribe-turned-filmmaker who’s capable of much more than this.