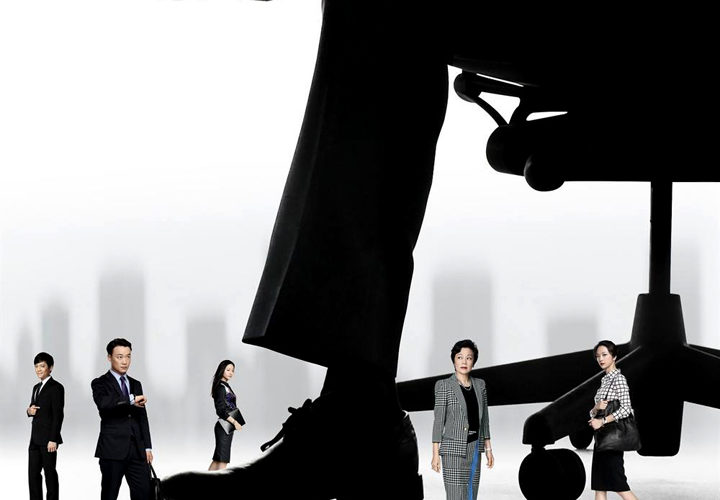 It’s worth noting that there’s probably a certain expectation when hearing the following words “a Johnnie To musical.” One thinking his classical formal talents would lean towards something that could resemble one of Vincente Minnelli’s MGM masterpieces, yet it’s probably closer to one of Fritz Lang’s nightmares; an architectural hell, the artificiality of the sets; lines and bars only enforcing the idea of a prison, and the giant clock in the center of the office, on a constant countdown to doomsday.

Set in 2008 at the point of the Lehman Brothers bankruptcy (though one doesn’t remember the financial crisis seven years ago looking this cool), Office‘s tale of “corporate intrigue” sees young and old juxtaposed as two new employees attempt to work their way up through the company Jones & Sunn, all while two old guards at the very top engaging in greed and trickery behind the scenes.

They being the two romance-destined upstarts hoping to climb their way up the company: innocent 24-year old Lee and the mysterious Kat (who has a somewhat fishy background as the daughter of restaurant mogul), and the scheming Chairman Ho Chung-ping (a surprisingly spry Chow Yun-Fat) trying his hand at winning the trust of company CEO Cheung Wai (Sylvia Chang, also the film’s writer), yet only for his personal gain.

Yes, while sounding like prime material for a romantic comedy, if anything, the characters are stuck in as much a trap as any one of To’s hard-edged crime films like PTU or Drug War; the looming specter of capital hangs over all these films, and thus in effect so does ruin and death.

While admittedly this writer’s knowledge of the financial world doesn’t go much beyond that of Vincent Adultman from Bojack Horseman (“I went to the stock market today – I did a business”), the placement of these bodies, and the importance of the spaces they inhabit, establishes all the viewer could need to know. Just look at the importance of access to the company elevator for Lee (beyond just the obviousness of “moving up in the company”), something complicated when returned to in a nightmare sequence; never has that simple mechanical movement seemed so frightening.

The film is aware of the concentrated world it’s depicting — the quick sight of a homeless person pushing a shopping cart (think of the tip-off lyric in Randy Newman’s “I Love L.A.”) outside the window of Lee’s apartment making the film’s critique quite clear. Even being presented in 3D (a first for To), an at-first-promised-to-be-innovative format only revealed over time as a crudely commercial gimmick, seems oddly fitting for such a garish world.

Admittedly as a musical, the songs and choreography take somewhat of a backseat to the art direction — if you really want Johnnie To’s entry in that genre, stick to his excellent, underseen, light as a feather 2008 feature Sparrow. But at least in some form, the buoyant music articulates the contrast at the heart of the film, or as Talking Heads once said, “And as things fell apart/nobody paid much attention.”

Office is now playing at TIFF and opens on September 18th.