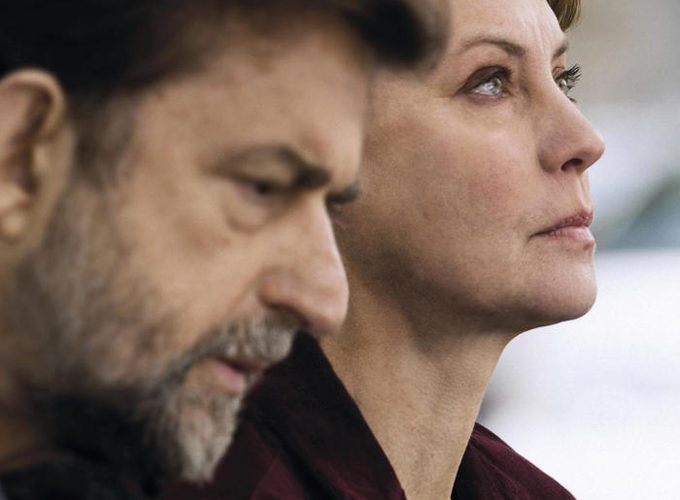 The opening credits of Nanni Moretti’s Mia Madre, with portentous music set against a black background, set off a few warning bells. Has the weight of the human condition finally gone to the usually funny ol’ Nanni’s head?

In his newest — sadly, one of the few narrative films this writer can think of to depict a female director — Margherita (Margherita Buy) struggles to make her rather corny-looking social-realist drama (though it looks like the kind of film Moretti would probably like). This is due to a mixture of both the self-doubt of having to repeat her own themes and ideologies (blatantly stated to her in a dream sequence) as well as being railroaded by an egotistical American star (a very loud John Turturro, in what one wonders might be a commentary on the current state of European co-productions). In addition to being in something of a distant relationship with her daughter and going through a painful break-up with her boyfriend, there’s the realization that her sick mother doesn’t have much time left, to which her only real ally in pain is her eternally patient, graceful brother Giovanni (of course played by Moretti, not being able to completely escape claims of narcissism).

Moretti has become a target of the film-critic intelligentsia (aside from some unfortunate comments at the 2012 Cannes Film Festival) due to being a rather plain stylist, and his humanism not being as rigorously schematic as certain festival favorites (see a certain acclaimed film from a Belgian duo last year). While a certain few of his films have shown an assured visual hand, Mia Madre forgoes We Have a Pope’s various wide-angle tableaux shots of Vatican headquarters or Dear Diary’s Kiarostami-inspired long takes of Moretti riding through Rome. Yet the formal modesty of My Mother is not without its charms, such as when Margherita’s daughter driving slowly on her scooter to Jarvis Cocker’s “Baby’s Coming Back to Me” (used multiple times in the film) capturing a small, everyday joy.

Though paired with Chantal Akerman’s No Home Movie, another film at the Toronto Film Festival about a female director dealing with the passing of her mother, Moretti’s picture — even if also sharing that one’s relative restraint — feels like it lacks specificity. Wanting to position the film she’s making as just Margherita going through the motions — e.g. her voice-over at a press conference critiquing herself as she notes that she makes the same promise and over and over again about real-life / “important” cinema to the media — the film certainly toys with Moretti looking inwards at his own cranky, sanctimonious public persona, but ultimately ends up just a little too passive.

A confession but not an exploration, it ultimately leaves both her art and her mother as vague emotional roadblocks and not what they really mean to her. Perhaps the comfort of a “life goes on” concluding scene followed by needle-drop of that same bittersweet Jarvis Cocker tune over the end credits would at least steer things to an end that we could just quickly brand with the “humanist” label. But, instead coming to a very tough conclusion, it can perhaps be guessed that the future of Moretti’s cinema is highly unpredictable.

Mia Madre is screening at TIFF and will be released on August 26.