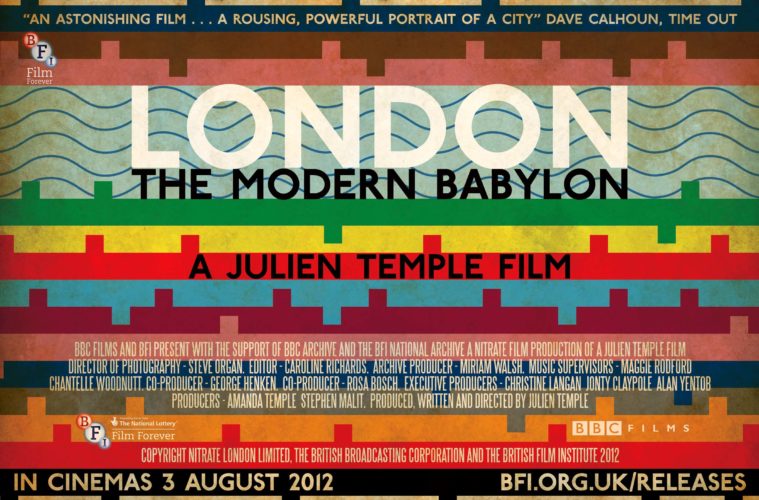 London – The Modern Babylon inspires envy: someone needs to make a film like this about every town and city, worldwide. Many aren’t as culturally as significant as London, and many filmmakers aren’t as skillful as London filmmaker Julian Temple, however this is a love letter – flaws and all.

Starting with Hetty Bower, a 106-year old women who is one of the film’s narrators (although the film is not about its narrators so much as it is about the citizens of London, past and present), the past appears ghostly, told in super imposition reflecting on neighborhoods lost to gentrification as the poor are pushed into “estate” housing (projects, as they are known in the US).

The film’s use of archival footage, often taking the story of London 10 years at a time, is religiously linear or even geographically or thematically based in its organization. It is perhaps like all big cities, including Toronto, lacking the logic of New York. Toronto is a rapidly growing city of neighborhoods, where it’s not uncommon to find a tree-lined set of town houses in the shadow of a giant skyscraper across the street. Here is a film that celebrates the multiculturalism of London, tracing its origins and implications, and natural conclusions. Leaving us in present day, it leaves us wanting more – with a sights, sounds and smells – in essence, this achieves what the best institutional IMAX documentaries do as a destination film (all be it more honest and more critical than say Texas: The Big Picture – also a commissioned work).

The critical dimension grabbles with poverty from flat gentrification to the present struggles of those that live in government housing (including a mother who is forced to either leave the housing program or uproot her child and move somewhere in which they know no one) back to the 60’s and 70’s, incorporating the haunting story of a rent boy in archival footage. The second critical dimension is the lens through which history is viewed: Temple returns back to a CCTV command center – using footage from the 80’s, 90’s and 2000s – drawing comparisons to the destruction of World War II to modern terrorism as we know it. Landscape too here is key, including a river that was once open to the public, locked down as real estate becomes increasingly expensive – the domain of condo owners pay for this privilege. London  – The Modern Babylon is a cognitive map, a stunning record of past, present and future. Temple essentially retraces the steps of Fredrick Jameson’s groundbreaking research in The Image of the City, Jameson asks residents of Boston to draw their environment. Temple takes it a step further, carrying out these illustrations – all to one of the best soundtracks of the year. Here is a sophisticated, entertaining and haunting look at a world-class city – the kind of film every city needs to commission before its too late.