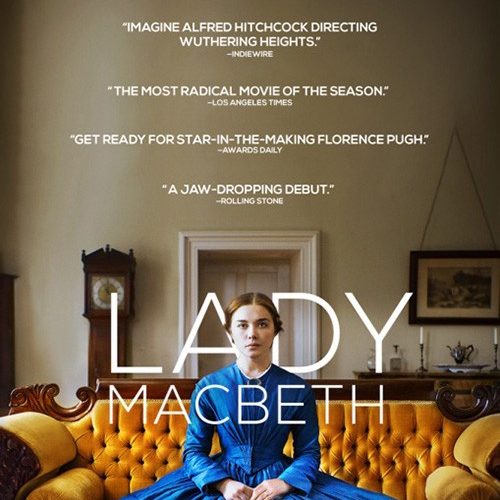 Before William Oldroyd‘s first foray on the silver screen with Lady Macbeth, he was an experienced theater director, which clearly has aided his adaptation of Nikolai Leskov’s Lady Macbeth of Mtsensk. The gothic allure of this period piece about a woman forced into marriage and deciding to take things into her own hands is both refreshing and captivating, and make no mistake: there is nothing theatrical or stiff about the film.

This is the kind of period piece that even non-fans of the genre can be enthralled with. Rejuvenating the genre with some new blood, his camera rarely moves, leaving his characters with room to breathe and fully flesh out their arcs within his story. And what a story it is. Set in Victorian London, the film is concerned with Lady Katherine (a mesmerizing Florence Pugh), a young woman stuck in a marriage she never asked for. It is mentioned that she was “bought” by a much older man (an electrifyingly sadistic Christopher Fairbank) who forces her to marry his son Alexander (Paul Hilton, exuding gloomy dread).

Alexander doesn’t seem to like Katherine very much; the feeling is mutual, of course. He takes extended trips outside the area, leaving Katherine alone and bored in their County Durham estate. Katherine isn’t interested in following any of the societal rules of the time. She is a rebel and won’t go down without a fight. Her father-in-law doesn’t make things any better by constantly reminding her that he owns her and she needs to adhere to her role as wife. The cat and mouse game they play is riveting and seems to shatter the conventions that might come with such a drama.

She eventually falls for Sebastian (Cosmo Jarvis), one of her husband’s servants and a man that brings out a rebellious, almost manic side in the young lady. This spells bad news for many of the enemies she has gathered along the way as she will try and get rid of them one by one.

Although we tend to sympathize with her at first, Pugh’s star-marking turn as Katherine is a performance that defies conventions as she will do almost anything to get the freedom she most desperately wants. Something that comes quite naturally today in some societies (freedom, true love, her own free will), certainly wasn’t back then as restrictions and laws in the bourgeoisie prevent Katherine’s desires. So, is what she does justified? That is the fascinating debate that Lady Macbeth fosters. In an age where feminist voices are getting their deserved attention in cinema, this peculiarly strange tale that unfolds in shocking and unexpected ways is something of a miracle to behold.

If Pugh is a revelation, so is Oldroyd. This is an auspicious and striking debut film that spells the start of a genuinely talented filmmaker as he handles his camera in breathtakingly spacey and formidable fashion. He creates an indelible character in Lady Katherine, a woman that is not easily understood, but dares to break the conventions of the times by doing unspeakable things. Oldroyd captures our gaze with every frame and doesn’t balk at the story’s more shocking sections. He means to shake us and does.

Lady Macbeth premiered at the Toronto International Film Festival and will be released by Roadside Attractions on July 14.