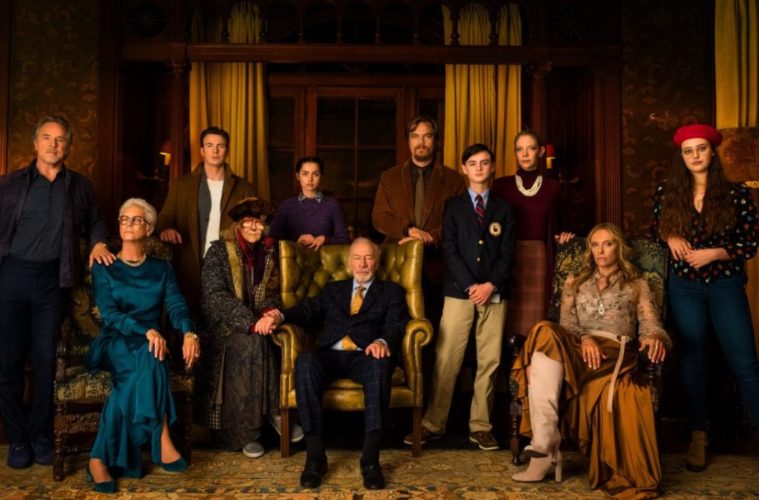 TIFF Review: ‘Knives Out’ Brilliantly Goes Beyond the Genre Demands of a Whodunit

No stranger to a good mystery—noir (Brick) or comedy (The Brothers Bloom)—Knives Out sees Rian Johnson back to a wholly original property before returning to the world of Star Wars. From the stellar cast to its Clue-esque estate (even he couldn’t resist that joke), this whodunit has looked impeccably positioned to deliver exactly what the genre demands while also dissecting and subverting it for good measure. That the final result might go even further than that only makes it more intriguing. Why? Well the mystery surrounding Harlan Thrombey’s (Christopher Plummer) death is rather matter-of-factly solved within the first thirty minutes. Its truth, however, possesses enough layers to blur the line between culpability and intent as the game moves beyond just discovering a smoking gun.

In order to peel back those layers, Lieutenant Elliott (Lakeith Stanfield) and Trooper Wagner (Noah Segan) must bring the Thrombey clan back together for one more round of interviews. This means corralling Linda Drysdale (Jamie Lee Curtis), her husband Richard (Don Johnson), and their son Ransom (Chris Evans), her brother Walt (Michael Shannon) and his family (Riki Lindhome’s Donna and Jaeden Martell, formerly Lieberher, as their alt-right internet troll son Jacob), and widowed sister-in-law Joni (Toni Collette) and hers (Katherine Langford as daughter Meg). All but Ransom return to the scene of their patriarch’s birthday death (Harlan’s mansion) with additional players both big and small picking up his slack, including Great Nana (K Callan), Fran the maid (Edi Patterson), and Marta the nurse (Ana de Armas).

While it is narratively crucial for us to wrap our heads around their disparate personalities, motives, and whereabouts on the evening in question thanks to a full recap by way of repeat frustrations, it’s also necessary for renowned private detective Benoit Blanc (Daniel Craig) to get his bearings. The reason he’s suddenly appeared will eventually be revealed, but his pedigree precedes him considering the endearing Trooper Wagner holds his crime-solving prowess on par with the late Harlan himself—a best-selling mystery author of which this enthusiastic civil servant is also a huge fan. Blanc may not learn anything Lt. Elliott didn’t already know, but that doesn’t mean his objectivity as a third party untainted by the emotional accounts heard before the funeral won’t help poke a few holes.

I don’t want to give much away beyond the dual purpose of finding the murderer and covering said murder up. Blanc moves with wheels perpetually turning, walking the grounds while everyone works to cleanse themselves of suspicion via lies, contamination, and silence. This hardly deters the detective, though, since they don’t interest him as much as his unsolicited invitation: a mystery in itself. This therefore supplies a secondary motive either from the murderer, a worried family member, or Harlan himself. So Blanc does his best to pit the suspects against each other, pushing their buttons in a very deliberate order so their respective deceit can be exposed by petty rivalries. This is how we learn that being the killer isn’t the only way to reveal you’re a monster.

This truth comes into focus even clearer because of the Latina caught in the middle. More than a nurse, Marta became Harlan’s confidant. As such, his death hits her the hardest with real pain considering she has no inheritance stake or real connection to the family beyond a W2. And yet they didn’t even let her attend the funeral despite telling her individually how they wished she could before being “outvoted.” This is a rather pointed and hilarious gag paralleled by every Thrombey remembering a different country of origin for her ethnicity too. Sure they appreciate what she did for their benefactor, but at the end of the day they also spawned a Hitler youth (Martell’s Jacob doesn’t have much dialogue, but his demeanor speaks volumes).

Similar to Ready or Not earlier this year, Knives Out is an unabashed commentary on the current state of affairs in America. Where that film pitted an unsuspecting white woman against its despicable family of entitlement and means to teach them a lesson, this one does well to highlight our nation’s minorities’ fears by positioning a Person of Color in that role (de Armas has never been better). Beyond the brilliant comedy Johnson writes for his actors to prove who the Thrombeys really are beneath their smiling façades, there’s also the risk of what a huge case like this might do to someone whose mother is undocumented. This dynamic colors the family’s duplicitous actions as well as their emotional outbursts whenever fate dares provide Marta what’s “rightfully” theirs.

Nobody but Marta (and maybe Fran) laments Harlan’s death. If anything the others are ecstatic because they all fought him that night and put their financial futures at risk. Could these pampered souls who feign hard work and determination while leaving out the monetary value Dad invested in their pursuits to ignite such exemplary “blue collar ethic” have put a knife to his throat, though? Maybe. We see their temper and accept that human beings can do crazy things when under pressure, so it’s definitely in the realm of possibility. It could even be a case where they all plunged that blade into him at different times, unaware that the others did the same. Maybe what we know for sure is one puzzle to the piece.

That’s the beauty of what Johnson built: he provides nothing but empirical fact through flashbacks because those authentic events can be given brand-new meaning later when placed within the context of another such memory. The key to solving what’s going on is therefore not in the fiction, but its reality. Rather than sprinkle truth and lies together so we can pick up on things in the incongruities, Johnson plays with ambitions and intent. A word or an expression can have multiple layers that therefore prevent them from tipping their hand to future interpretations. When something blatant arrives (say a splintered piece of wood exposing a secondary means of ascent to Harlan’s room), it doesn’t steal our focus. Johnson uses it as a joke.

We’re constantly on our toes and led in circles without knowing it because perception isn’t objectivity. Just seeing something happen doesn’t mean its full picture was absorbed. Our acceptance that Blanc is a master detective is one such example since the genesis of this comes from a magazine article we never read. Appearances will forever deceive whether it’s Meg’s friendship with Marta, Blanc’s credentials, or a blackmailer’s demand for money. These characters have been meticulously constructed to lead us astray as a rule because they are also being led astray. They entertain with confidence and idiocy until convoluted yet airtight elucidations inexplicably introduce escalating danger that becomes subverted itself. Rather than have the plot manipulate his characters, Johnson lets them manipulate it. That’s an extremely rare Hollywood feat.

Knives Out screened at the Toronto International Film Festival and opens on November 27.