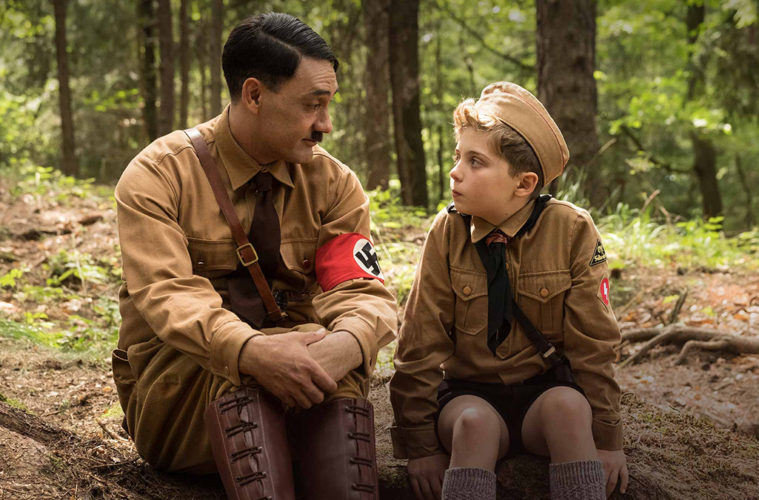 To start with Jojo Rabbit, we should look at Taika Waititi’s previous films Boy and Hunt for the Wilderpeople, both of which operate in a similar fashion to his latest work. These two movies have the look, sound, and feel of a children’s movie, but the director grounds them with dark, tragic subject matter; Boy is essentially about a child coming to the realization that he has a terrible, neglectful father, and Wilderpeople tells the story of a rebellious orphan finding a new family after his caring foster mom drops dead. This blending of light, whimsical humor, and aesthetics with grim content feels inspired from the nostalgia for movies from our own childhoods, mainly the ones with a whole lot of magic and a little dash of terror and trauma.

Now, after the blockbuster Thor: Ragnarok, Waititi goes back to his wheelhouse with plenty of ambition, tackling modern society’s greatest trauma. And despite so many forces working against it, Jojo Rabbit does actually work as an entertaining, crowd-pleasing comedy. Calling it an achievement would be a stretch given the divisiveness of the story alone, along with its simplistic morals and kid-movie optimism sometimes veering into schmaltz, but it’s a funny film with a deranged sense of humor, willing to get pitch black when it needs to, and perfectly in line with Waititi’s previous work.

Naturally, his decision to make a cutesy comedy involving Nazism has raised a lot of criticisms. The film takes the perspective of 10-year-old Johannes aka Jojo (Roman Griffin Davis) in Germany during the final months of World War II. Jojo is a member of the Hitler Youth, soaking up all the anti-Semitism and hatred taught to him to the point where his imaginary friend is Hitler (played by Waititi). But one day he discovers that his mother (Scarlett Johansson) is hiding a Jewish girl (Thomasin McKenzie) in the walls of their home, and as he gets to know her more, he begins questioning everything he’s been taught by the Nazis.

There’s a bit to unpack here, namely why this sort of story needs to be told (Waititi adapted his screenplay from Christine Leunens’ book Caging Skies). Some criticisms point to its timing, as even the slightest amount of sympathy to a believer of Nazism isn’t necessary, especially in our current political climate. Others point to its pandering, like its marketing campaign describing the film as “an anti-hate satire” and Waititi claiming it as “the film we need right now.” And there’s also the messaging, in which Jojo’s transformation from devout Nazi to the sensitive, innocent child he really is reeks of a “hate the sin, not the sinner” mentality.

These are all valid criticisms to throw the film’s way, and anything taking a light touch to this kind of material deserves to be questioned thoroughly. But watching Jojo Rabbit, I didn’t see too much recklessness in what it was doing. Going after how the film is sold to audiences is silly in the long run, as it’s the film that will be remembered instead of its marketing campaign. Thematically speaking, Waititi paints in broad strokes, going for a “love conquers hate” statement rather than making any direct political or social commentary on today’s social and/or political climate. The pro-love message is a pretty timeless and universal one too, a sentiment only mistaken for being harmful given what’s it’s mixed in with and the means Waititi wants to communicate it.

Maybe the biggest deciding factor for one’s enjoyment of Jojo Rabbit will be the comedy, since Waititi’s dry sensibility isn’t for everyone. The cast is top-notch throughout, as Waititi has a knack for working with child actors. As for the adults, Sam Rockwell is a highlight as a demoted officer, whose resignation at his side’s eventual defeat makes him give up all pretenses of loyalty to his leader (the fact that he’s playing another shithead with a heart of gold is also funny in itself). Neither the masterpiece nor the atrocity it will be described as from here on out by fans and critics alike, Jojo Rabbit is pretty funny, mostly fine, and (perhaps worst of all) well-made.

Jojo Rabbit premiered at the Toronto International Film Festival and will be released on October 18.