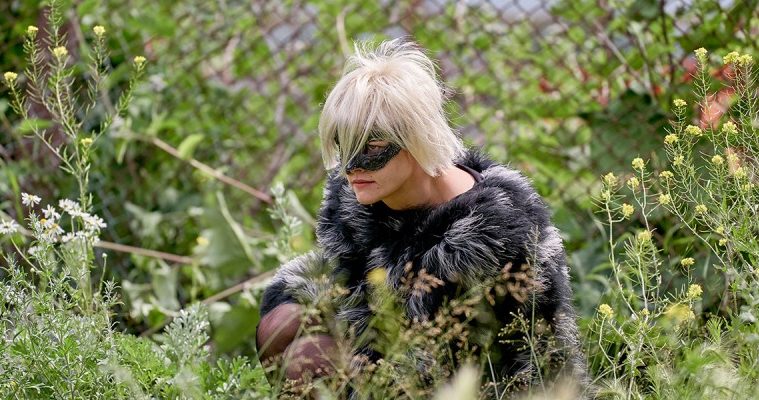 Kristen Stewart’s young career is peppered with highs–most notably, Olivier Assayas’s Clouds of Sils Maria and Personal Shopper–but the actress has never been more natural, more unaffected, or as legitimately fascinating onscreen as she is in J.T. LeRoy. As Savannah Koop, the infamous “body” of nonexistent author J.T. LeRoy, Stewart is vulnerable, funny, and wounded. Yet she’s also nonchalantly charismatic, showing how and why the sight of the quiet, bewigged LeRoy was so utterly enticing to a world craving for mystery.

It’s a stunning performance, one matched by the wondrous Laura Dern as Laura Albert, the author who created LeRoy and wrote his works. Jeremiah is bouncy and pleasing, if overfamiliar and never as insightful as one would hope. That is not necessarily the fault of director Justin Kelly (I Am Michael, King Cobra), who co-wrote the film with Koop herself. It has far more to do with the existence of the 2016 documentary Author: The J.T. LeRoy Story. That delightfully juicy film tackled the tale first, telling the sordid tale with wit and visual ingenuity. When watching J.T. LeRoy, it’s nearly impossible to be surprised by the revelations therein–if, that is, one has seen Author.

Jeremiah director Kelly and his cast deserve credit, however, for creating a film that is so undeniably entertaining. The focus here smartly shifts from Albert, the real subject of Author, to Koop. As Jeremiah begins, young Savannah has arrived in San Francisco and the home her musician brother, Geoffrey (Jim Sturgess), shares with his bandmate and wife, Laura. The duo have a secret to share with Savannah: Laura is the uncredited author of Sarah, a much-buzzed story of a boy’s fractured youth with his lot-lizard mother in West Virginia. The credited author is one J.T. LeRoy, a puzzling figure to the literary world. Laura knows how to milk LeRoy’s invisibility, often masquerading as the author on phone calls. But the sight of Savannah presents Laura with the unique opportunity to give physical life to the reclusive writer.

In a blonde wig, sunglasses, and baggy, ill-fitting clothes, Savannah fits the role perfectly. Laura reassures Savannah that her reservations about the lying and the possibility of being discovered are slim. And this is true, for a while. Savannah’s LeRoy is showered with attention, from fellow writers to Hollywood producers (a well-cast Courtney Love plays one) and even an international icon (Diane Kruger portrays a famous European actor-director named Eva whose identity will be obvious to anyone who saw Author). And by her side, as always, is Laura Albert. She found her own role to play: a chatty British handler named Speedy. Dern is a delight as Speedy, whose exaggerated accent draws raised eyebrows among all who come into contact with her and LeRoy.

The J.T. LeRoy saga was always doomed to end in disappointment. As Kelly shows, Laura’s grip on the situation becomes increasingly tenuous, while her work with husband Geoffrey becomes further marginalized. Meanwhile, Savannah grows more and more accustomed to portraying J.T. And her intimate relationship with Eva further complicates matters. During this stretch, the work of Stewart and Dern is particularly strong. They capture the complexity of the situation, as well as the inherent drama. The existence of J.T. LeRoy, writer and superstar, means Savannah and Laura must coexist, and must deal with the complex jealousies and passions involved. How could a situation this murky last forever?

J.T. LeRoy is less concerned in issues of authorship and authenticity than Author was, and that’s a key distinction. Instead, this film works to establish a real emotional link between Savannah, Laura, and the audience. The hugely talented Kelly nails it. Yet the aforementioned air of over-familiarity is impossible to overcome. It keeps Jeremiah from ever approaching greatness, but while the film may not count as a complete success, the performances are worthy of great praise. The casting of Stewart and Dern is inspired, and they make J.T. LeRoy a tasty, satisfying version of one of the most gobsmackingly wacky literary hoaxes of the last two decades. It’s certainly fun to revisit the J.T. LeRoy story again. Now, it’s time to let it rest.