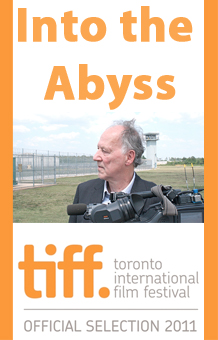 [TIFF Review] Into the Abyss I’m not sure Werner Herzog, Jean-Luc Godard or even Errol Morris would agree the role of film is to expose the truth. The truth varies. The truth is not on trial here. The facts of a triple homicide are laid out in the first of the film’s chapters: in 2002 in Conroe, TX two young man Michael Perry and Jason Burkett shot a nurse Sandra Stotler, her son Jason, and her son’s friend Arnold Richardson over a sports car. There is little doubt, although the destiny of Burkett, whose brother and father are also serving time, seems to be written before he was born. Another destiny written is that of Perry, who speaks to the filmmaker behind glass, eight days before his execution.

Both are human beings, Herzog makes the case to Perry that while he may not like him, he still respects him as a human being and proceeds to engage him in a conversation. The conversational contains much of Herzog’s voice, a surrogate for our own voice, he take a backstage from his usual active voice over, allowing the material to unfold on its own.

Herzog’s sense of control, particularly his point of view and approach make Into the Abyss worth seeing. Like all his films, it’s not without moments of humor, including an early interview with a priest whom he unexpectedly asks a question that truly interests him, on the topic of nature. Into the Abyss is a rich portrait of one segment of life in Conroe, TX. “At risk youth” exist everywhere – while the Stotler family lived in a gated community and Perry had parental support, Herzog does not believe that their fates were intertwined; he allows all parties to speak freely. The film does involve into somewhat of an advocacy documentary against the death penalty, something so common in Texas at one point a former executioner says they were conducing two a week in Huntsville.

Describing this film is difficult: it’s not journalism. Journalism stops at established facts. It is a comprehensive portrait contained in a story that unfolds with a clear point-of-view, growing out of a series of portraits Herzog is working on for the Discovery Channel. Remarkably, through a series of interviews including a focus on the victim’s family and the wife of Burkett, Herzog crafts a work focused not on the past, but the present. A travelogue of sorts (he stated he’d known each of his interviewees for less than an hour), he has created an engaging and mesmerizing film. The truth of the film exists within the film: manipulated by a music score and shot selection as all film is, Herzog remains a master, providing us humanity, which is far more complex – and troubling than the facts.

Into the Abyss was picked up US distribution by Sundance Selects.