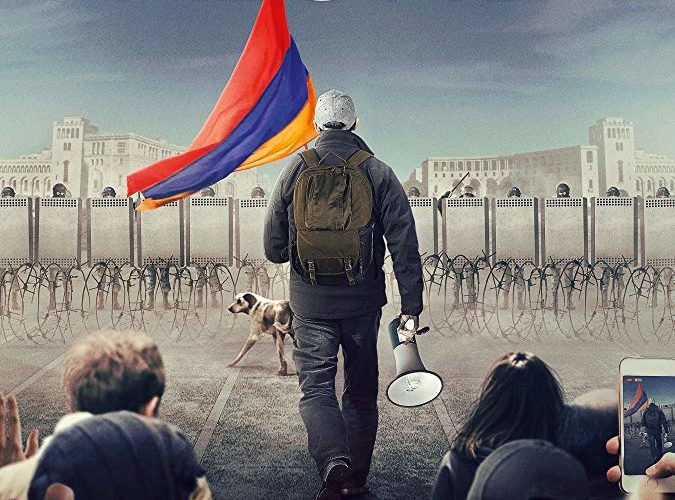 TIFF Review: ‘I Am Not Alone’ Explores Armenia’s Velvet Revolution

Despite the title of Garin Hovannisian’s documentary on Armenia’s 2018 “velvet revolution” being I Am Not Alone, journalist/activist/Congressman Nikol Pashinyan was exactly that at the movement’s beginning. Word came down that former president Serzh Sargsyan was to be voted in as the nation’s latest Prime Minister—an unjust and demoralizing development considering he had used the last term of his presidency to change laws and ensure that new office would effectively keep him in controlling power. Because Pashinyan refused to simply let that happen without a fight, he organized an eighteen-day march towards the capital city of Yerevan in order to block politicians from entering the Parliamentary building and thus prevent the vote. Rather than join thousands of protestors upon his arrival, only a couple hundred showed up.

Instead of letting that be the end of it, Pashinyan rallied students, stormed the government-sponsored radio station, and caused enough chaos to force President Armen Sarkissian into serving as a mediator between the two sides. Sargsyan of course wanted a “dialogue” while the protestors demanded nothing short of his resignation. The police got involved, thinly veiled threats mentioning a deadly gathering back in 2008 were uttered, and arrests were made to guarantee the people got a taste of how far the Republican Party was willing to go to retain its strangle-hold through bribes, corruption, and fear. Pashinyan and his team never wavered, though. They remained vigilant in their quest to keep their actions firmly in the realm of civil disobedience and inspire change the democratic way. Hovannisian’s film is another on an ever-expanding list of documentaries about civilian-led rebellions against dictatorships like The Square and Winter on Fire. The available footage here is great because camera crews followed Pashinyan while he was live-streaming everything from his phone on Facebook. So we get first-hand accounts from the ground as well as recorded interviews in the aftermath of all the major players including party leaders; the man in charge of the government’s military response, Valeriy Osipyan; and Sargsyan himself. That last one is intriguing, especially if you’re unsure of what happens in the end. Seeing his smiling face is nothing short of disquieting considering his plans to exploit the nation, but his inclusion does mean receiving an account of the events that’s as comprehensive as possible.

As such, we also learn a bit about who Pashinyan is and what he’s endured and overcome whether death threats, having to go into hiding, or wondering if his new role as a politician was destroying the activism inside him for a more conformist mindset of compromise. You could almost say Sargsyan’s actions reinvigorate his drive to make a difference because he was reminded of just how much worse things could get if complacency ruled the day. That doesn’t mean he will be enough to guarantee a victory, though. When Pashinyan physically blocks a public transportation bus, the driver implores him to move regardless of his identity or rousing motivations to instill change. This man was thinking of the present while the fight around him targeted the future. This realization is most clearly seen via Republican spokesperson Eduard Sharmazanov and his introspection as far as what his party did to earn the ire of the citizens. While I Am Not Alone‘s main goal is to document what occurred and inspire people from oppressed nations to stand against tyranny, the decision to give the opposition a voice so they could offer hindsight is one of its strongest traits. What Sharmazanov and others say could turn out to be the lies of men biding time and hatching schemes to try for total control again, but the simple fact they must consciously take the people into consideration now as something to strategize against rather than silence confirms the power they’ve relinquished. Accountability will no longer be ignored.

As for the film itself: the production value is high and the care taken to create this complete timeline is obvious. The only part that struck me as odd was Serj Tankian popping up as a talking head adding commentary rather than insight—his presence seemingly more about his being producer and composer than a necessary addition to the subject on-screen. While objectively a small detail, it’s tough to ignore his presence amongst the dramatic tales provided by those who were there in Republic Square. That’s where the heart and soul of this story exists and where it probably should have stayed since no other outsiders have come along for the ride. This starts and finishes with Pashinyan’s faith in Armenians and they do not let him down.

I Am Not Alone premiered at the Toronto International Film Festival.