TIFF Review: ‘Greed’ is an Unsubtle Movie for Unsubtle Times 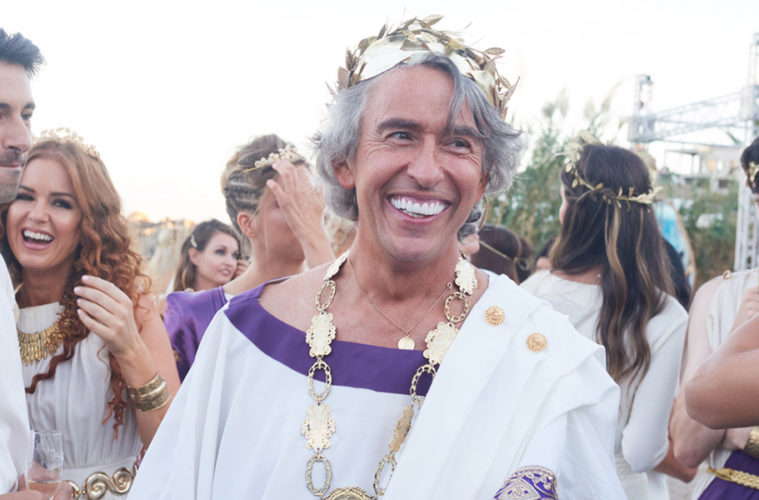 Starring Steve Coogan as a billionaire who is literally named “Rich,” Greed cannot be accused of being a subtle movie—but then, these are not subtle times. Reusing a comically raspy, manly baritone from The Trip, and kitted out with a set of absolutely blinding false chompers, Coogan is Sir Richard “Greedy” McCreadie—“King of the High Street,” per an opening exposition-via-YouTube, a flashy fast-fashion magnate obviously modeled on Sir Philip Green, the Topshop chairman notorious for asset stripping and general fat-cat arrogance. In Greed, McCreadie’s teetering empire is signified through flashbacks to Parliamentary testimony covering his shady dealings and reliance on sweatshop labor, intercut throughout the looming hubristic disaster of his 60th birthday weekend. You might groan at the symbolism of a modern-day robber baron throwing a multimillion-dollar toga party, was the concept not in fact directly lifted from Green’s 50th.

Here, the island is Mykonos, not Cyprus, though references to the appearance fees charged by various celebrity performers and “friends” have a ring of documentary truth. EU-migrant laborers toil on a replica amphitheater (they have to finish, so it doesn’t look like ruins) as McCreadie, whose entire worldview seems encompassed by Gladiator quotes, is fitted for his purple-striped toga praetexta. Surveying the work of his underlings, he gives a thumbs-down from the imperial box—but the Syrian refugees are still camped out on the nearby public beach, and the put-upon lion tamer keeps insisting that his sluggish-seeming beast will be ready to roar when the time comes…

A deep supporting cast of UK character comics is allotted a very full complement of upstairs and downstairs subplots. Shirley Henderson, Coogan’s wife in 24 Hour Party People, is here, hilariously, his wizened and sweary Irish mother; McCreadie’s first wife (Isla Fisher) and staged-reality-show star daughter have matching Eurotrash trophy boyfriends, and son Asa Butterfield keeps referencing the myth of Oedipus to anyone who’ll listen. Working for McCreadie are a local builder, a party planner and an assistant, and even the musicians and cameo guests who show up as themselves (Stephen Fry plays the party’s emcee, nailing a tone of self-aware obsequiousness on everyone else’s behalf). Greed could have been called Parasites: it limns an entire ecology feeding off one host, a whole structure of highly competent professionals whose life’s work is the fulfillment of his whims. All the “workers” wear togas, says party-planner Amanda (Dinita Gohil).

In case you didn’t get the message—or the farcical structure—another factotum self-diagnoses as a “mechanical” from A Midsummer Night’s Dream. That’d be McCreadie’s “official biographer,” David Mitchell, giving a vintage Peep Show-esque display of gabby uselessness and superfluous self-deprecation. He uncovers no Rosebud in this story. Back in his public-schoolboy days, McCreadie ran the poker game and wheedled his friends out of 50 pence at a time by making their money magically… disappear; his business dealings reveal a pointedly Trumpian reliance on verbally abusive “dealmaking” and a paper-tiger history of bankruptcies. Winterbottom and Coogan recapture some of the antihero swagger of 24 Hour Party People, mostly through high-adrenaline montage; there is no particular flair to McCreadie’s insults, just bracing bullying.

Opening and closing with E.M. Forster’s directive to “only connect,” Greed makes motions towards a Laundromat-like panorama of consumer choice, tax shelters, and shafted seamstresses, though a film that merely recreated Green’s Gatsby-esque island party with minimal embellishment would have made the point better (and better than The Laundromat, too, while we’re at it). Winterbottom weaponizes a cast member’s skin color, saddling her with a tragic backstory buried beneath McCreadie’s ill-gotten gains and extraction of the lifesblood of Asian garment workers; in adding a Syrian refugee plotline (McCreadie keeps complaining about the poor people ruining his view), the filmmaker also returns to the sanctimonious didacticism of Road to Guantanamo. A film casting stones at excess, Greed is hardly without sin itself.

Greed premiered at the Toronto International Film Festival and opens on February 28.