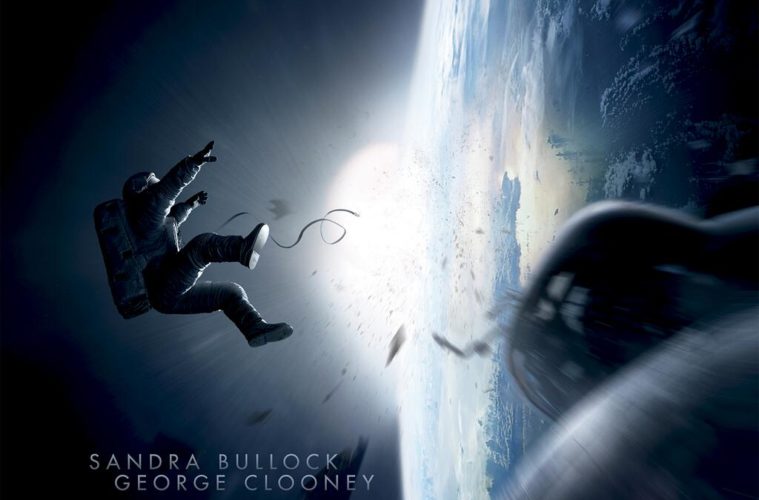 Back in the ’90s, at the advent of IMAX technology, certain amusement parks would have a screen with some “experience” putting you “into the action.” Enter the 21st century, and director Alfonso Cuarón has made one of these with Gravity. While I admit such a description may seem like I’m putting the film in a bad light — simplifying it to the basest aesthetic traits — I honestly mean it as a compliment. Space has always been one place to which only a select few could boldly go; in this exhilarating look at its vast, empty expanse we truly get a sense of how beautiful and terrifying it is.

Yes, it’s a one-trick pony, but they get that trick unequivocally right. With an opening continuous shot lasting thirteen minutes — definitely a composite à la Cuarón’s masterful Children of Men climax and, possibly, more impressive — we seamlessly shift between Dr. Ryan Stone (Sandra Bullock), working hard on a Hubble Telescope upgrade, Matt Kowalsky (George Clooney) floating around the Explorer shuttle with his prototype thruster pack, and the beautifully-rendered Earth glowing in the darkness. We hear the tentative fear in her voice during her first space walk, parallel to Matt’s confident tone, retirement looming on his return home, and the good-humored rapport from Houston keeping them company down below.

For running only 93 minutes, it’s less-than-surprising to encounter the incident that turns their fun and games into a harrowing fight for survival very shortly after this first cut. The Russians have decided to blow-up one of their defunct spy satellites, the resulting debris leading to a chain reaction of space junk as giant metal bits begin shooting around the Earth at bullet speeds — all with our astronauts smack dab in the line of fire. Destruction, chaos, death, and radio silence follow until we’re left with Ryan and Matt floating around their defunct ship, his jetpack becoming their last chance for safety at the International Space Station miles in front of them with barely ninety minutes of movie time before the shrapnel slingshots for another go.

This is the entirety of Alfonso and son Jonás Cuarón‘s plot. They drop these two characters into a vacuum with only their wits and a couple of well-placed lifelines at their disposal. We know as much about them as we do their dead friends, of which only Paul Sharma‘s Shariff gets screen time. We glean a few joyous and tragic details as Ryan and Matt converse — mostly as an exercise to calm her down from using all her oxygen before they find safe haven — but their motivations for traveling into space or what is waiting for them on Earth are mostly inconsequential. To an extent, they need something to live for, but beyond that it’s all about the edge-of-your-seat suspense as one catastrophic event leads to another.

Inherent in this simplicity is the unavoidable sensation that everything is insanely contrived. Once one obstacle is overcome, a more violent and difficult event is sure to follow. This escalation keeps us riveted to our seats while mounting at such a perfectly-measured pace that we almost don’t realize how unlucky — or lucky, considering how little room for maneuvering there is inside the debris field when it arrives — these two are. The sheer randomness of the Russian domino effect; the frayed wire exploding into flame; and the deployed parachute playing a huge factor not once, but twice, can be nothing but carefully written walls for our tragic victims to smack into head-first.

In all honesty, though, that sort of nitpicking only proves you don’t allow yourself to have fun. This is fiction and, therefore, obviously scripted to excite and entertain. Yes, above the crippling sense of isolation both claustrophobic and agoraphobic, that’s what Gravity is: pure unadulterated fun at its basest level. First comes the awe of space, then the adventure, and finally the horror. We twirl around the actors in an orbit that takes us within the intricacies of scientific discovery, floating with them as the blackness of the IMAX screen envelops us. When Stone and Kowalsky see the coming destruction barreling towards them, so do we. Cuarón even puts us inside her helmet upon her inevitable separation, in order to “feel” her breathing and know it’s all gone terribly wrong.

Stone is therefore our conduit into the unknown, her anxiety and panic mirroring ours while exacerbating it further, too. She is the newbie with Clooney’s voice providing soothing comfort via long-winded stories, most likely made up so their resulting laughter can quiet our nerves and hers long enough to get our bearings. The silence of such calm can only last so long before instilling an even greater sense of terror when alarms sound to declare time is running out. Lost and out of her depth, Bullock becomes a mess of doubt and pessimism opposite Matt’s encouragingly, undyingly sunny disposition. And when we enter her helmet again to experience the action of swimming through the Space Station in first-person, the heaving breaths become our own.

It’s the very definition of a thriller, from the mysterious locale to the unpredictably tumultuous events containing no hope of survival. This is the evolution of filmmaking, a retread concept made, like most technological achievements, infinitely better, putting you in the action like nothing else. The end may shine a bit too epic of a light — and which may elicit a slight giggle when the score pounds to a heavy crescendo of release — but you can’t blame them for going full-speed ahead. As Avatar showed 3D’s potential, Gravity gives IMAX’s all-encompassing size true kinetic purpose. Do not wait for the Blu-ray: this must be seen on the biggest screen possible.

Gravity is currently screening at TIFF and opens on October 4. Click below for our complete coverage.