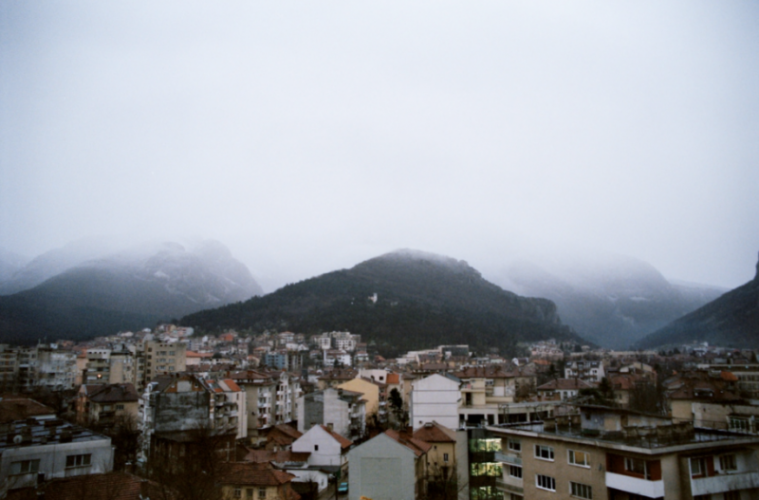 The “social realism” sub-genre of drama has been awards bait in the European festival circuit lately and this year’s Locarno International Film Festival jury, led by Arturo Ripstein, bit at Ralitza Petrova’s debut film Godless. The vision of post-Communism Bulgaria is uncompromising and relentless, pessimistic and depressive, which means it fits right in with the “important” films that it shares its genre with. The overexposure of a genre that relies on the shock and brutality of everyday life detracts from the stuffy misery of Godless, which blends in with a number of Eastern European films canonized in the past decade.

Gana (Irena Ivanova) takes care of the suffering elderly and fuels her morphine addiction by stealing and selling her patient’s identification cards. Her desire to leave the poor town is heightened as her drug-fueled paranoia develops and she catches her boyfriend with other women. After meeting Yoan, a patient and conductor, Gana tries to bring focus back into her life, just as her history starts to catch up with her.

From an aesthetic standpoint, the snowy landscape makes for a dreary, but beautiful environment for the lawless land that Petrova sets up. In fact, the snow and natural lighting creates glistening brightness in outside shots and illuminates the interiors during the days. Despite cinematographers Krum Rodriguez and Chayse Irvin playing with the given environment, the aesthetic is often compromised by the camera wearily wandering and invading personal space. The extreme close-ups and soft focus are a frustrating distraction utilized to fully exhibit the misery of Gana and her situation, but the impoverished Bulgarian town makes just as much an impression as the characters. There isn’t enough room for the characters and the setting to develop symbiotically due to the ineffective 4:3 aspect ratio, which serves as an unattractive stylistic choice instead of tangible claustrophobia.

Gana’s plight is even more hostile than the aesthetic created by Petrova. Godless’ non0stop misery is exhausting and makes the 90-minute runtime feel far more bloated and useless. Repetitive shots of morphine usage, bathing elderly and sex acts don’t work to create empathy for Gana because of the film’s cold dissociation from the characters, their lives and situations. The obsessive, banal nature of the visual motifs come across as indulgent and tiresome and the story practically begs for a moment of redemption or levity.

The closest thing to redemption that Gana experiences are also the most inspired moments and when Petrova directs with a sensibility that is uniquely female. The scenes related to Yoan’s choir, which Gana joins, break away from the surrounding suffocation and are supremely, gently directed. The overworked camera gets an opportunity to sit still and observes the choir as they sing Gregorian or Celtic chants in a large empty room where their voices echo. These couple scenes don’t have the tenacity or bite that looms over the rest of the project, which unsuccessfully floats between character study and a portrait of poverty in Bulgaria.

Like many well-intentioned debuts dealing with important themes, Godless hugely suffers from a directorial hand that is too heavy to deliver a powerful message without wringing the material for more than it is worth. As if the experience necessitated more torture, the scenes book-ending the film come together as an incongruous wink that add an unexplored element to the film and only elicits visual and narrative confusion.

Godless is currently playing at the Toronto International Film Festival.