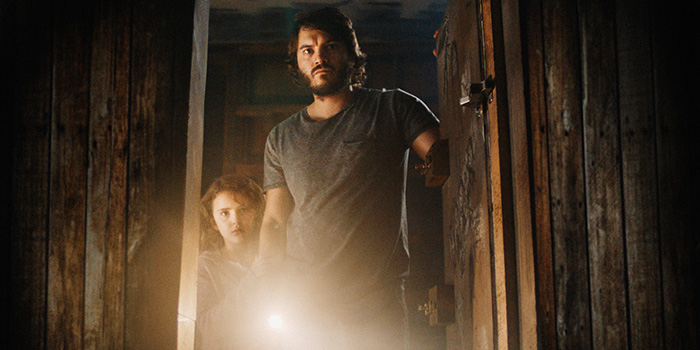 TIFF Review: ‘Freaks’ is a Sci-Fi Thriller with Grounded Stakes

It’s weird to think about a movie like Push today — an under-appreciated, much-maligned sci-fi that I’d argue is a lot better than the legacy it’s been given. The X-Men and Spider-Man trilogies had completed by the time it was released and Iron Man just hit theaters the year before to usher in what would become the Marvel Cinematic Universe. And yet here was a smaller-scale, original piece centering upon a group of mutants that could exist outside the realm of built-in fandoms. Perhaps that which made it special at a moment in history on the cusp of becoming inundated with superhero sagas was its downfall. IP proved more important to studios and audiences alike than opening minds to something different. I hope Freaks doesn’t suffer the same fate.

Written and directed by Zach Lipovsky and Adam B. Stein (currently shooting the live-action Kim Possible reboot), Freaks‘ story of young Chloe (Lexy Kolker) and her unhinged father (Emile Hirsch) is destined to achieve one of two things: infamy alongside Push or acclaim like Chronicle. It’s a low budget thriller for which my mentioning other “mutant” films might be considered a spoiler, but I don’t believe you could ever truly sell it on its own merits without using the word. Everything that the notion of “powers” entails becomes crucial not only to the plot, but also the filmmakers’ progression through a mystery gradually revealing just how different the world onscreen is to ours. Their setting is more complex than simply a precarious safe haven within a post-apocalyptic wasteland.

That’s what we’re introduced to at the onset. Chloe and her Dad live alone in a house that’s seen better days. He quizzes her on how to communicate with other people, conditioning her to know a series of lies meant to protect her from unknown “bad” entities. When she’s doing well and calm with infectious laughter, their relationship is tip-top. But when she looks out the cracks of her duct-taped windows at the bright sunlit neighborhood and an ice cream truck in the road, curiosity leads to frustration before eventually turning into anger. If that rage becomes too much or she’s caught in a lie (Dad says to lie to everyone but him), she’s locked in the closet for time out. The process is methodical, precise, and strange. Lipovsky and Stein intentionally keep information hidden so we can jump to our own conclusions about what’s happening. Is Dad protecting his daughter from a threat or has he gone crazy in a bid to keep her from exiting their home? Who are the people they talk about paying to become their new family (Michelle Harrison’s Nancy and Ava Telek’s Harper) and why does the latter appear to know Chloe despite her being forbidden to go outside? And what is with the chained woman (Amanda Crew) seen inside the closest one second and gone the next — creepily kneeling with hair covering her face? We’re dealing with a strained domestic relationship, ghosts, and conspiracies all at once with no clue how to interpret anything until the unexplainable starts to make sense.

This is made possible by the steady crumbling of a façade we aren’t sure is real. Talk about “normal” versus “abnormal” arrives as Dad returns injured and weak after trying to get groceries. A shimmer ripples across the screen and pops when he falls asleep and Chloe decides to go outside to buy an ice cream from Mr. Snowcone (Bruce Dern). He’s yet another enigmatic figure with assumed ulterior motives helping to bring the world into focus alongside news footage, billboards, and an unsteady police force. More bits and pieces are revealed until we get a grip on the truth even if Chloe is still somewhat in the dark. The dead come alive again and those in hiding become exposed right when Agent Ray (Grace Park) circles closer.

The film ultimately expands to encompass a worthwhile mythology with ample sequel potential (although the filmmakers stop short of setting one up prematurely to not risk unfinished cliffhangers) and yet about 90% of the runtime takes place within a hundred yard radius of Chloe’s house. Largely due to budgetary constraints, Lipovsky and Stein have also worked a reason why into their script that allows the world to be brought into that home. Fantasies and dreams crafted by a seven-year-old girl’s imagination give pause because the results of such interludes have a lasting effect on the future. And every little detail — straight down to a smiling child holding out a melting ice cream without caring that it’s pooling atop her hand — carries weight. Not a second is wasted. I anticipate some will scold Freaks for what occasionally feels like a light-hearted tone despite an overall darkly severe truth shrouded from view, but they’d be mistaken. You have to remember that everything is (more or less) seen via a child’s perspective. So you need that sense of embellishment to really dig deep into her psyche. Mr. Snowcone is initially shot in close against a blinding white sky to highlight contrasting environments and focus upon his shifting demeanor. The depiction starts garishly saccharine before turning combatively violent so Chloe’s enjoyment can take a hard left turn into anxious panic. And once everything is out in the open as far as motivations and power, a bit of comic relief goes a long way towards balancing all-out war.

Hirsch and Dern are great in roles that prove much more complicated than initial assumptions. The fact that Lipovsky and Stein want us to underestimate them and cultivate preconceptions ensures their transformation from misinterpreted surfaces into poignantly emotional cores driven by pure familial love. These two characters have no choice but to wear invisible masks because there’s a legitimate chance that the totalitarian police state Dad’s delusions conjure is real. Only Chloe is therefore freely uninhibited due to her ignorance to what’s really going on. Only she is innocent enough to play her father’s games without understanding their importance. Kolker is fantastic, effortlessly transforming their necessary deceit into a believably impatient rage. Unfortunately for everyone involved, Chloe is the last person you should ever want to make mad.

Freaks screened at the Toronto International Film Festival and opens on September 13, 2019.