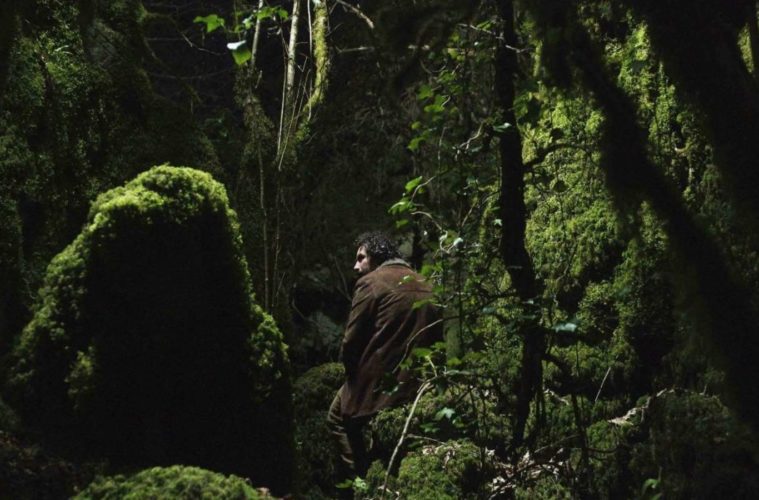 TIFF Review: ‘Endless Night’ Pleases the Eye, But Not Totally the Mind

Outside of Pedro Costa and Ted Fendt, it’s been hard to detect the aesthetic influence of radical filmmaking duo Jean-Marie Straub and Danièle Huillet on contemporary cinema. But the addition of Eloy Enciso’s Endless Night to the rather small canon frankly makes sense for the moment we’re in, politically speaking. As an attempt to reckon with a lingering sense of fascist takeover in both Europe and North America today, the film takes us to Galicia, Spain during the Franco regime, as the wandering Anxo (Misha Bies Golas) returns home amidst turmoil. Taking place over chapters; we see long, talky encounters on public transit, in bars or the countryside between workers, peasants and those in the highest echelons of power. The poor are getting boots to their asses, what else is new?

While there’s no doubt that the text-driven approach is indebted to the beliefs in depicting violence and historical trauma through dialogue instead of on-screen representation from Straub-Huillet, one can almost see something a little more simple in the film’s drama. If you can think back to the uneasiness in the weeks following the 2016 US Presidential election where many of us talked to friends and family as if the world was about to end, you’ll get a sense of what Endless Night is touching on.

It’s a film of considerable beauty (landscape! nighttime strolls on the lake!) and skill that can’t help but reek a little bit of intellectual self-flattery. Essentially, a film that’s not bad, but hits a certain number of beats, even when speaking within a certain niche. An excitement sets in when the film cuts away from a very Straub-Huillet inspired conversation between two city-dwellers to a scaffold worker tending the construction of a new police station, who intrudes on the talk. The rigid shot-reverse-shot pattern upended, there was a sense that the film could formally surprise at any moment from that point on, which unfortunately it did not really, despite offering such sumptuous images in its country-set back half.

By the time the last portion featuring dedicated to letters of affected citizens being read aloud came, the air seemed to let out of the film. Never feeling too stimulated by what should be the grand climax, it seems it’s being a little too carefully arty and restrictive; quiet resistance as something approaching a bit of a whimper.

Though more acutely, there was a lingering feeling that retreating into the past felt a little bit like a safe move. While it never leans too hard on period detail, it strangely seemed like the film could at any moment morph into a past/present amalgamation like Christian Petzold’s excellent Transit. Beyond a radio and a mention of a robot in a letter, there’s very little presence of technology, leaving the question if it should engage more with the modern world. Would bringing this austere style to a contemporary setting be more exciting and feel less like pleasing a certain arthouse demographic?

One wants a truly political film to not feel like a foregone conclusion, even if it’s not going for what seems like the obvious. Though, to cut it some slack, there was enough of its runtime that pleased the eye, if not totally the mind.