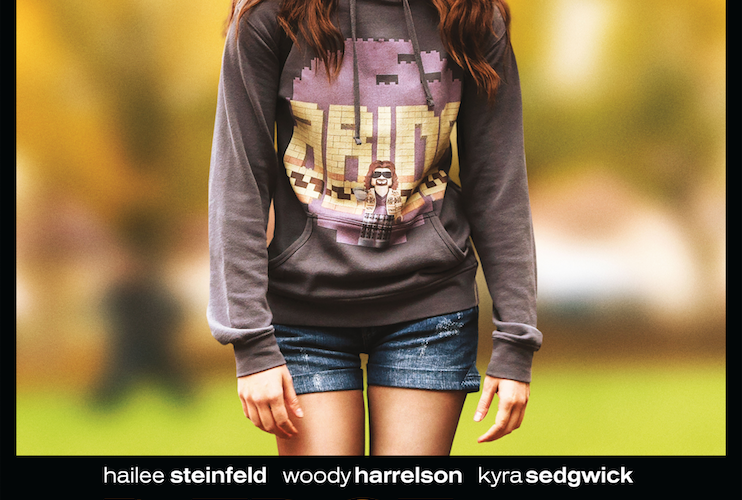 [TIFF Review] The Edge of Seventeen

Festival films about teenage angst are a dime a dozen, or maybe a nickel at this point. The genre is as constrained by its expected tropes as horror or superhero films in today’s age, and as in those cases, it takes a guile filmmaker to either make them work or do something new. The Edge of Seventeen does both, delivering a refreshing blast of humor and pathos, both of which are arrived at with an easy honesty which belie that this is writer/director Kelly Fremon Craig’s debut feature.

The movie opens with concerning cliché, as main character Nadine (Hailee Steinfeld) narrates the basic details of her life for the audience – a device which is not used again after said opening. On top of the standard horribleness of being a teen, Nadine must deal with her lingering grief over the death of her father a few years before, her mother’s (Kyra Sedgwick) near-complete inability to function as a single parent, and the fact that her only friend, Krista (Haley Lu Richardson), is now dating her brother Damian (Blake Jenner). Subsequent estrangement from Krista leads the now-solitary Nadine, long secure in avoiding social interaction whenever possible, to venture outside her comfort zone. Among other things, she opens herself up romantically for the first time, with an equally awkward classmate (newcomer and skillful mumbler Hayden Szeto). Nadine is the kind of sarcastic high school lead character we’re well used to, but there’s a key difference here: both she and the movie recognize that this frequently makes her an asshole, and it doesn’t try to smooth this over. Many films (particularly of the independent flavor) give lip service to deconstructing their caustic main characters, showing how interpersonal toxicity ruins relationships, but often make the lesson learned in too pat a manner, after wringing most of their comedy out of said toxicity.

In severing Nadine’s sole healthy relationship early on, The Edge of Seventeen instead makes every time when her abrasiveness emerges into a moment of suspense over whether or not she’ll hurt someone and spiral further. When Nadine asserts that she’s “not like other kids” because she likes old music and movies and isn’t addicted to her phone, her teacher / unwilling mentor (the ever-droll Woody Harrelson) cuts her down with a simple “Do any of them like you?” This is not a role for the misfits of the world to romanticize. Rather, it’ll hopefully help them to mind the line where self-deprecation simply becomes off-putting performative self-loathing.

Steinfeld dances on that line like an Olympic gymnast on a balance beam. This is her first role since her breakout in True Grit that’s truly worthy of her talents. She’s helped along greatly by Craig’s script, which convincingly conceives of Nadine as an intelligent, witty kid without ever making her talk like she’s being overwritten by an adult, and which always keeps her on the right side of sympathetic.

Craig also honest-to-god directs the film, and I can’t think of the last time that was the case with a high school movie. Just as many laughs come from well-timed cuts as from dialogue, and the imagery frequently works to convey Nadine’s emotional state, from her isolation in a dingy bathroom to her romantic mooniness as she approaches a crush in an underlit pet store aquarium section. A winning surprise for the holiday season, The Edge of Seventeen isn’t John Hughes for a new generation – it’s much more honest than that.

The Edge of Seventeen premiered at the Toronto International Film Festival and enters a wide release on November 18.