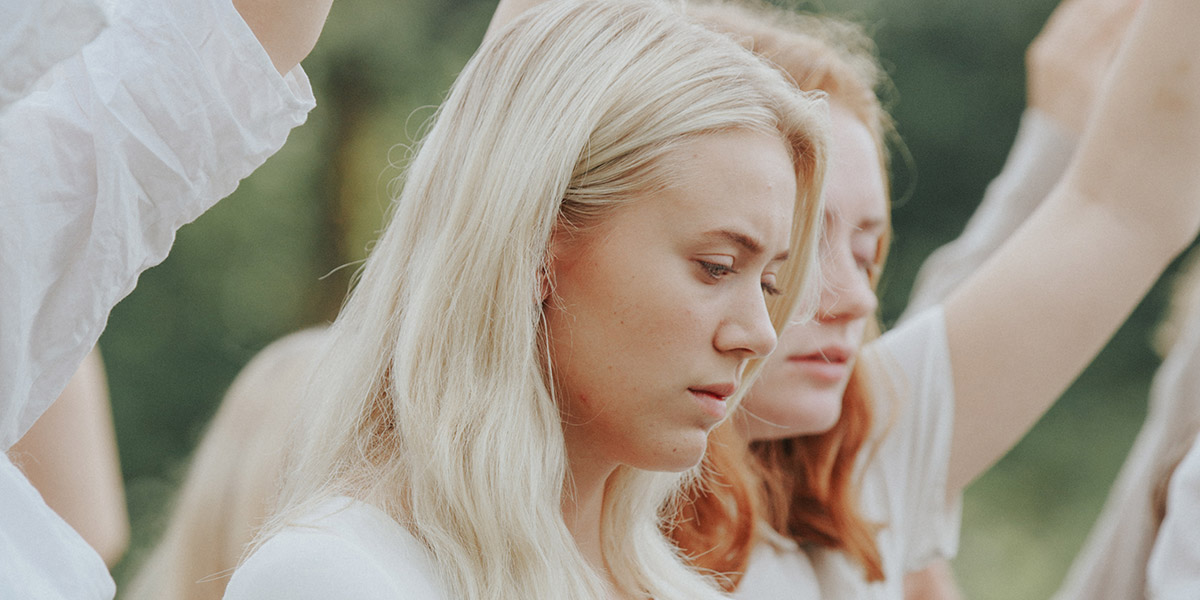 Contemporary, commercial Christian spaces are under the microscope in Disco, Norwegian filmmaker Jorunn Myklebust Syversen’s sophomore feature, which opens on an image of teenage disco dancer Mirjam (Josefine Frida Pettersen) drowning in a Christ-like pose and ends on a similar image recontextualized as some form of post-exorcism relief. The film between these bookends is a bit more subtle, though not by much.

The film’s first half operates in a sort of soft, artificial glow of both modern dance and the more capitalist side of Christian worship and never loses sight of Mirjam. We experience each of her domestic rituals in these environments from her POV including attending mass (which depending on which church can look very different), singing Christian pop/rock ballads in a youth group, practicing dance, and consuming an assortment of Christian television programming and podcasts reassuring her that things can get better. What’s wrong exactly? Well, not much, on the surface. She appears to have a nice home, a loving family, and just won her most recent competition, but underneath there’s strange pressures and histories that begin to intrude.

Syversen shoots the disco competitions like a suffocating, objectifying experience of pounding electronic music and artificial lights and clothes. Her uncle is a rich, fraudulent televangelist taking people’s welfare money to deliver them “salvation” from their sexuality, her mother is actively hiding an abusive biological father from her and her younger stepfather (who runs a hip, neon-lit, guitar-playing, fog-machine-using church called “Freedom”) ranges from kind to stern to inappropriate depending on his financial status and if the mother is around.

Each of the stresses form their own weight and, as the film progresses, they become more and more entangled. Her performances are affected and soon–despite the forceful inclusion of Christ in every aspect of her life already–she is being told it’s not enough. Depressive thoughts are just “the work of the devil” and all. To combat them she seeks out a conservative, Catholic church that makes fun of her stepfather’s “bell and whistles” modern, commercial version of Christianity. The artificial neon replaced by wooden pews, electronic pop ballads about Jesus replaced with hymns, here she finds the serene traditions that modern flash has superseded. You can probably fill in the rest.

Syversen wields contemporary Christianity as an industry of cult-like psychological and physical indoctrination, its emptiness highlighted through its use of sets and technology, visually distinct even from the Catholic’s much more natural color palette of whites, browns, and greens. It’s less of a spiritual critique than it is an economic and material one, the implication being that these latter forces have a pretty significant effect on the former.

Mirjam’s guide through the Catholic commune she eventually hitches up with suggests as much, presenting her with sermons about the “wide” and “broad” gates of destruction, that of course include direct paths to hell for the blasphemous behavior of modern churches that pretend to love Jesus but “look and act” like the sinful, capitalist world. Syversen however sort of muddles the critique with her bizarre choice of structure.

Circling back to the bookends mentioned earlier, the arc of freeing oneself of pain or suffering by stripping the material world is not a unique one, so the film’s anxious view of pervasive, hollow modernity in the face of a more grounded, traditional spiritualism reads as a strangely reactionary vision being posited as if it were radical or taboo. Even more strange is its broader implication of dance as an objectifying tool for sexualizing kids considering which church it is Mirjam ends up at.

By the time we reach the film’s cleansing commune climax (think Midsommar without all the carnage) there’s something lost in translation—what should play as ambiguous instead reads as simplistic, so despite an interesting, sometimes unsettling depiction of the conservative commune (an image here of kids pushed to the point of fainting, echoing an earlier statement about them “exploring their limits” is eerie) intended to complicate these two opposing forms of Christianity we’re ultimately left with a sense of formal stillness and relief brought about by the conservative spiritualism that feels strangely vague and unearned.