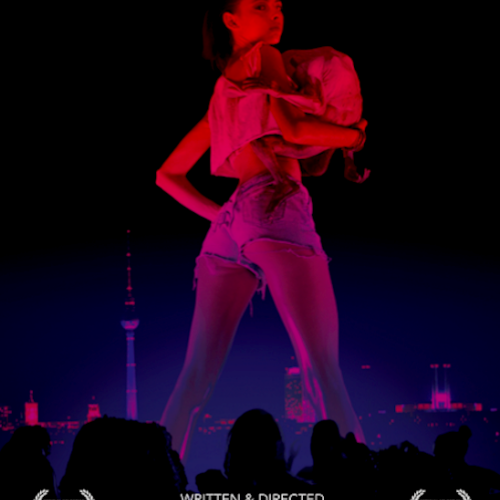 Before the German export Der Nachtmahr even begins, the viewer is presented with not one, but two warnings – the first concerns strobing, while the other points out the use of “isochronic and binaural frequencies” – as well as a suggestion that “this film should be played loudly.” The work certainly lives up to its promise of an unforgettable hyper-sensory experience, as it spirals down a rabbit hole lined with neon glow sticks, ear-splitting EDM, and an inexplicable cameo by former Sonic Youth frontwoman Kim Gordon.

Influenced by both low-brow horror (Basket Case definitely comes to mind) and high-brow art (namely a 1781 painting by Henry Fuseli) the feature debut from writer/director AKIZ opens on the main character Tina (Carolyn Genzkow), a hard-partying Berlin teenager with little parental supervision. After blacking out during a poolside bacchanal, she awakens to find a weird creature only she can see raiding her family’s refrigerator. The event soon escalates into an unrevealed “condition” that requires therapy and a daily pill regimen. As the hallucinations increase, and her behavior becomes more erratic, her parents and psychiatrist begin to wonder if medication is sufficient. Faced with the frightening possibility of institutional commitment, Tina decides to confront her tiny tormentor, only to discover she has manifested a real being with which she shares a stigmatic bond.

AKIZ spent the last several years developing the project, and the effort shows in each tiny detail. The creature design alone – which is based off the director’s own vision – is impressive in its understated execution. The CGI creation, with its distinctive knotty hunchback, mottled skin, and slanted, milky eyes, looks deceptively real (I actually thought it was an animatronic), a quality enhanced by the addition of soft, animal-like purrs, whimpers, and groans. Its presence is fully realized by an intense performance from Genzkow, who reacts to each sighting with such conviction and full-on delirium one can almost see the adrenaline pumping through her veins.

The creature’s subtle grotesque nature falls in line with an overall style meant to convey adolescent disorder. A handheld camera and numerous fisheye lens shots lend a disorienting vibe to sequences capturing Tina’s socially active, but lonely life, from sitting alone in her dim, cluttered room, to navigating a dark techno club in search of her friends. The visuals can hardly compete with the far more prominent sound element, which often cultivates a sense of calm with soothing music before suddenly exploding into a deafening, electronic cacophony. Though the startling effect strives to simulate the disturbed protagonist’s mental ebb and flow, the obvious trickery involved – i.e. the insistence that the film be played loudly – is nothing short of obnoxious.

While AKIZ supplies plenty of formalist stimulation, he’s not so keen on providing any clues to the story’s ultimate meaning. With nods to everything from E.T. to Rosemary’s Baby to Jacob’s Ladder, he constructs a deliberately confusing, Donnie Darko-esque narrative strewn with more questions than answers. The conceit allows viewers to develop their own theories on whether or not the creature is real, Tina is alive or dead, or the whole thing is just a crazy dream, which will certainly prove frustrating for some. Much like Tina’s decision to embrace her freaky friend, it’s better to just accept the film for the bizarre curiosity that it is rather than examine its intentions.