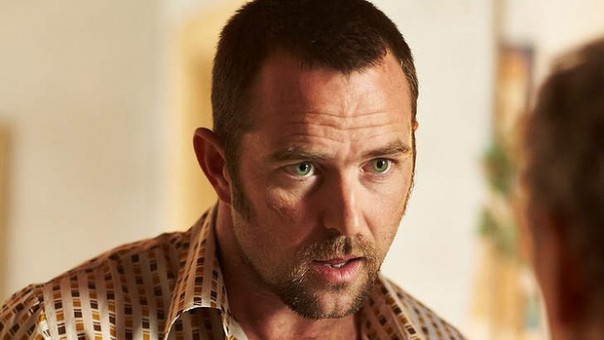 Relationships are the kind of experience dependent on context. Environment and circumstance dictate the way people deal with one another and respond to one another as much as actual connection and chemistry does. Friendships forged at bars, colleges, camps, and other places that seem separated from real life are much different than those wrought through work or the average social scene. Cut Snake is a film that takes this simple maxim and applies it to the kind of connection two people might make while serving time together.

Sparra (Alex Russell) is a doe-eyed young man with a mop of thick brown hair that covers his eyes doing his best to create a life for him and his fiancée (Jessica De Gouw) that is free of the burden of owing other people. He wants a life apart, and she is more than happy to be with a man who wants to make sure that they only have to rely on one another. However, when Pommie (Sullivan Stapleton), a mate of Sparra’s from his as-of-yet-undisclosed time in prison enters his life, the simple clockwork mechanism of Sparra’s simple life begins to get wound up too tight and burdened with one too many extra parts. It is an uncomplicated story – a man with a past struggling to leave it all behind and make a new life when suddenly the past catches up with him – and Cut Snake doesn’t try to dress it up with too many other baubles. As such, the plot of the film can feel a little threadbare to those just looking for a crime yarn. However, beneath this veneer of simplicity is a deeper emotional tale that really begins to scratch and gnaw it’s way out of the strictures of it’s plotting. Pommie is a bad influence on Sparra, but for all his talk about wanting to start something new and better, it seems incredibly hard for him to kick his old friend to the curb.

Pommie is a spectacular cinematic invention, and as acted by Stapleton he becomes the true center of this film. Anyone who ever had a certain kind of “bad seed” friend will know the type of man Pommie is: a bit too gruff, a bit too forceful, but capable of remarkable acts of consideration and kindness when he can feel the tension brought on by his presence. He’s the good-time guy that goes a bit too far, but in this case his criminal bent makes his intrusion not just burdensome, but dangerous — especially given his toxic influence on Sparra.

The dynamic between the two men – one a silent pretty boy and the other a bruising thug – has been played out in films before, but both Stapleton and Russell add silent shading to their characters that serves the emotional core of the story well. Their relationship is never so much a secret as it is an unspoken fact, and the depth of their friendship is easy to guess not because of awkward telegraphing, but because both men act the parts so well that every scene feels as though we were intruding upon two men in the middle of a heated debate, both trying hard to mask their previous conversation through pleasantries and smiles. But the eyes hold the key, and both of these actors could deliver a line of exposition with just a glance.

As directed by Tony Ayres, Cut Snake is, like many Australian films, a work of compelling ugliness. The story takes place in 1974, but the period details are kept to a quiet minimum, lending everything an air of timelessness that helps to better draw attention to the story at hand. Scenes of violence erupt with sudden and brutal results, but artful stylistic flourishes are kept to a minimum, and always serve a purpose. On the outside, they seem to be saying, these men share nothing except for these poetic moments of unbridled and unhinged viciousness.

If there is a weak spot in this film it is the same kind of weak spot most films of this ilk have: the female characters. Sparra’s girlfriend Paula is serviceable, but ultimately becomes a kind of token of victory or redemption, which is something that holds the movie back, especially towards the end. Thanks to the strength of the two lead performances and the well-honed direction, however, this is still a film to anticipate outside of festivals. It’s a minor story with minor ambitions, yet it manages to deliver a fully satisfying and moving experience.

Cut Snake is screening at Toronto International Film Festival. See our complete coverage below and the teaser above.