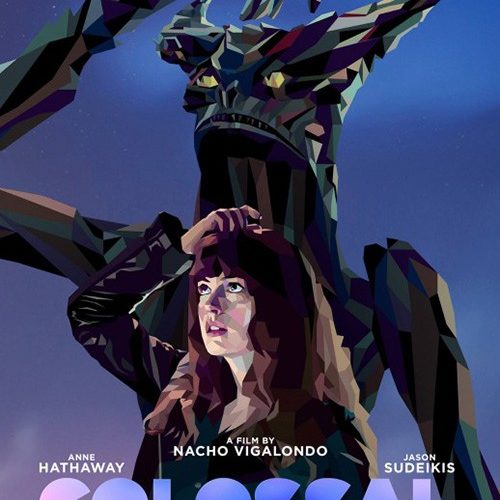 Whether the existence of time travel or an alien invasion, writer/director Nacho Vigalondo has proven king at dealing with large-scale concepts affecting small-scale characters. Always looking to portray how genre catastrophes are handled by nobodies on the ground without government credentials or scientific degrees, he continues this trend again with his latest monster movie Colossal … for the most part. After certain truths are revealed, it’s easy to discover how two former classmates in a sleepy city with one watering hole may have more to do with the chaos wrought by a giant Godzilla-sized humanoid creature in Seoul, South Korea than anyone would believe. Gloria (Anne Hathaway) and Oscar (Jason Sudeikis) have unfinished business together that’s ready to be unleashed and not even they know it’s there.

This film is many things: cautionary tale about substance abuse, depiction of jealousy’s power, and allegory for the darkness inside us that craves a bigger sense of notoriety (whether through love or fear) than our tiny lives could ever produce. It’s about failing to live up to the potential we create at too young an age to ever prove attainable. Here are the two best students their elementary school ever produced and yet one is an unemployed, alcoholic writer recently kicked out of her New York City apartment by frustrated ex-boyfriend Tim (Dan Stevens) and the other an angry hoarder who’s successfully brought his late father’s bar into the twenty-first century despite knowing it will never grow larger within this dead town. The mighty have officially fallen.

Anything they may label as reasons why are merely excuses masking deep-seeded issues born twenty-five years previously out of an act of childish vandalism they’ve since repressed. Adulthood found her letting promiscuity, immaturity, and the drink ruin a long-term relationship and job; him letting pent-up rage and lack of compassion destroy love and hope. Being that Gloria always beat him in school, however, seeing her return home with tail between legs might just be the greatest thing that’s ever happened to Oscar. He’s suddenly the “successful” one able to help with furniture, friendship, and a job—each kind gesture from her perspective becoming a stab in the back of revenge from his. Gloria’s lost and Oscar has seemingly been found. But those tables are ripe for turning. They’ve always been nemeses whether she realized or not. From what we can tell he never wanted anything besides excelling beyond her in something. Did he know the contest giving him the best chance was being an ass? Maybe. She’s finally come down to his level of mediocrity and he relishes it. But as Gloria discovers the impact of her drunken ways and its expansive reach, Oscar begins to feel the allure of evil licking at his feet to consume him whole. She metaphorically commits manslaughter while under the influence and now she’s growing empathy and guilt on a road to self-improvement. But Oscar is having none of it. If she’s going to move past him in human decency, he’ll simply have to embrace being absolutely horrible instead.

Wait, I thought this was a monster movie? From the opening scene of fright to its random return two and half decades later, the monster is always looming. Appearing each day at 8:05 am EST for a few minutes before vanishing into thin air, its blind rage and destructive nature has become an unavoidable sign of our species’ fragility. We constantly let demons infiltrate our souls—letting them sink their claws in—and we’re helpless at combatting their strength. The monster does the same. It cultivates peace throughout the world by providing a common enemy, but all we can do is wait for it to eradicate us. This reality either opens your eyes to the sanctity of life (Gloria) or a nihilistic attitude throwing morality away (Oscar).

It’s hard to connect these two worlds (American town and Korean metropolis) without spoiling major reveals you should experience in real-time, so I won’t. I’ll just say that while the monster proves to be a manifestation of our collective dark side, it also has the capacity to change like us. We can stop getting drunk and finding ourselves waking up at places we don’t know or having agreed to things we don’t remember. Gloria shouldn’t need to let alcohol rule her until tragedy strikes—it may be too late by then. And Oscar can let go of past grudges to embrace his achievements and support his friends (Tim Blake Nelson and Austin Stowell) as they do him. Or both can wipe out whoever is in their way.

While Vigalondo’s ability to render Gloria and Oscar into the cause of mass annihilation is uniquely badass in execution, I can’t help feeling it’s too much to handle. Timecrimes and Extraterrestrial effectively let their leads resonate beyond the larger ordeal because there isn’t a huge overlap, but with Colossal there is. It works wonders as far as character progression, but it almost trivializes what’s happening otherwise. It would be one thing to have Gloria and Oscar wake up to see everything’s been a dream, but making two nobodies so incredibly instrumental in creating an impossible real world situation asks a lot of the audience. For instance: we need to buy a random origin story coming out of nowhere solely to connect dots. This goes beyond suspension of disbelief.

Vigalondo sprinkles details to help (Nelson humorously questioning the absurdity of what’s happening as we do the same in our heads), but the overall severity of Colossal‘s tone prevents us from dismissing it as a lark. Hathaway’s emotional transformation and Sudeikis’ surprising psychopathy are foreshadowed, but those examples can often feel more for our benefit in hindsight than theirs in construction. Vigalondo has a top-notch conceit that unfortunately loses its way when buckling under the weight of the middle third’s anything goes antics. Thankfully, however, the climax prevails in its thematic resonance, moral quandary, and righteous hope. The monster may kill nameless hundreds, but its ability to save one could make everything worthwhile. Great power forever brings great responsibility, but we aren’t all as pure as Peter Parker.

Colossal premiered at the Toronto International Film Festival and opens on April 7.