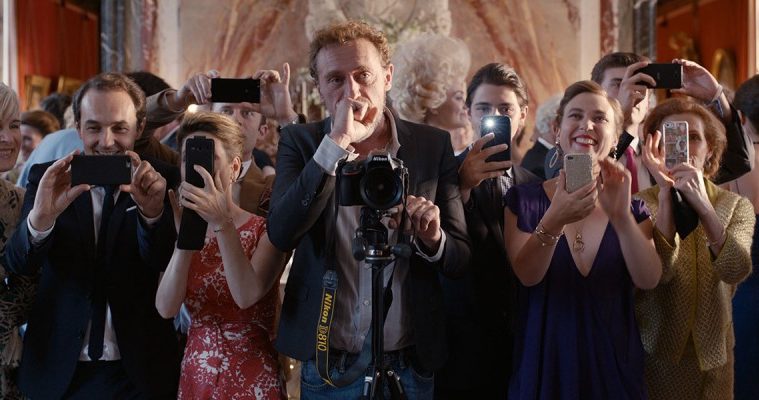 TIFF Review: ‘C’est la vie!’ is an Uproarious Comedy of Errors from ‘The Intouchables’ Duo

I went into Olivier Nakache and Eric Toledano’s latest film C’est la vie! knowing nothing about it. My assumption from their two previous works, Intouchables and Samba, was that it would prove a charmingly funny dramedy tinged with relevant politics and racial complexity. Well, I was wrong. Whereas the latter film honed in on the former’s politics, this one strips them away completely to focus solely on the comedy. The result is an uproarious contemporary riff on Robert Altman’s underrated classic A Wedding. While it doesn’t spread out quite so large a net—focusing almost exclusively on wedding planner Max (Jean-Pierre Bacri) and his eccentric crew—it still wonderfully distills the fiscal and logistical absurdity of such formally traditional celebrations with biting satire, broad pratfalls, and expertly rendered caricature to its essence.

They don’t ease us in either as the tone immediately reveals itself. We meet Max conversing with a young couple about their grand wedding in the heart of Paris. The two have questions about the costs quoted and whether they can bring things down even further than their previous scale-backs. Understandably frustrated—as anyone hired to do a job wherein the client micromanages things to the point of wanting to quit with a “Do it yourself if you know so much!”—he explodes into a tirade about how “inventive” he can be when pushed. You want frugal despite dropping a fortune on your majestic locale? Why not make it a potluck? I couldn’t help but laugh out loud when they ask if removing the “white borders” on their photos will make them cheaper.

But as the title states: that’s life. We live in a crowdsourced, do-it-yourself world. Experts have their education and experience dismissed with an “I’ll just Google it” mentality and they must assimilate or die a quiet death of obsolescence. Max is doing his best to evolve, but it’s an adjustment process technologically and culturally as far as finding good help on short notice willing to work off-the-books to save money on taxes. So he texts inappropriate messages due to his autocorrect. He’s forced into being a purveyor of band-aids fixing the countless problems that crop up thanks to demanding customers and inept employees. And he’s seemingly on an island of his own doling out favors and working to the bone for what amounts to little incentive to ever do so again.

Nakache and Toledano ostensibly create a worst case scenario to expose every one of these issues during a luxurious yet farcical occasion marking the marriage between Pierre (Benjamin Lavernhe) and Helena (Judith Chemla). It just so happens the groom is a pretentious bore with exacting tastes and massive ego. He therefore clashes with the singer (Gilles Lellouche’s James) due to his own superiority complex and the fact he’s an unexpected replacement for the hired bandleader. James of course wars with Max’s top lieutenant Adele (Eye Haïdara) too due to her desire to prove she deserves more responsibility dissolving into curse words and aggression. And Max can hardly focus on their shenanigans when his personal life interferes thanks to Josiane’s (Suzanne Clément) dual role as employer and girlfriend presenting an ultimatum: divorce his wife or break up.

Photographer Guy (Jean-Paul Rouve) brings an intern and insatiable appetites, Max’s brother-in-law (and employee) Julien (Vincent Macaigne) has a history with the bride, and newbie Samy (Alban Ivanov) is enthusiastic but dumber than a bag of rocks. Seb (William Lebghil) can’t help himself from practicing his magic despite having no aptitude for it, Henri (Yves Heck) has been designated as spokesperson for the wait staff who hate the idea of wearing costumes despite never having the courage to speak his mind, and Nabil (Khereddine Ennasri) abruptly chimes in as the group’s “Captain Obvious” in a way that never wears out its welcome. And the insanity only grows from there with Sri Lankan immigrants, spoiled lamb, and a groom’s “surprise” that must be seen to be believed.

The filmmakers wind everything tighter and tighter as things go on, introducing new conflicts to ensure everyone remains on-edge. If any two characters can have a row, they will for dramatic and comedic effect alike. Nakache and Toledano use repetition often to enhance personalities and jokes, aren’t averse to letting background details become important later on, and truly let Bacri shoulder the weight of a massive ticking time-bomb ready to explode. His Max wears incredulity as though it’s permanently etched onto his face and yet it’s never without cause. He treats everyone under his employ like family and they in turn become his children to corral. But don’t pity him since he’s as much a diva as the rest. The only difference is that he’s allowed considering he’s the one who signs their checks.

As far as plot is concerned, the main thrust is to survive the evening’s comedy of errors without any major incidents. From there arrive multiple sub-plots spawned by each character’s ambitions and/or shortcomings. The actors’ performances are augmented by idiosyncrasies rooted in demeanor as much as dialogue with ticks becoming discerning factors in how others react with them and how we enjoy the fallout. It could be Julien’s know-it-all OCD born from a former career as a school teacher, Patrice’s (Kévin Azaïs) constant shift from part-time waiter to full-time detective-in-training when answers must be found, or Guy’s attempts to build himself up as some great artist to a teenage apprentice buying none of it. Despite everyone splitting screen-time save Bacri, it feels like we know them completely.

This only enhances the humor as we try to guess whose turn it is to screw up next only to discover something worse than expected. And while we’re busy hypothesizing what the characters are going to do, we forget what they’ve already done might also have consequences yet unseen. As with any wedding, everyone finds him/herself doing whatever’s necessary to maintain appearances. Max is always saying, “We’ll adapt” and he believes it. So much of what goes right is the product of happy accidents while every carefully laid plan explodes. They just have to pivot and adjust to keep their clients happy (or at the very least not get fired). Love, lust, hunger, and ego all permeate the air, their victims chosen in whatever order helps raise insanity’s bar.