TIFF Review: The Shadow of Violence is a Stunning Drama Set in a Bleak World 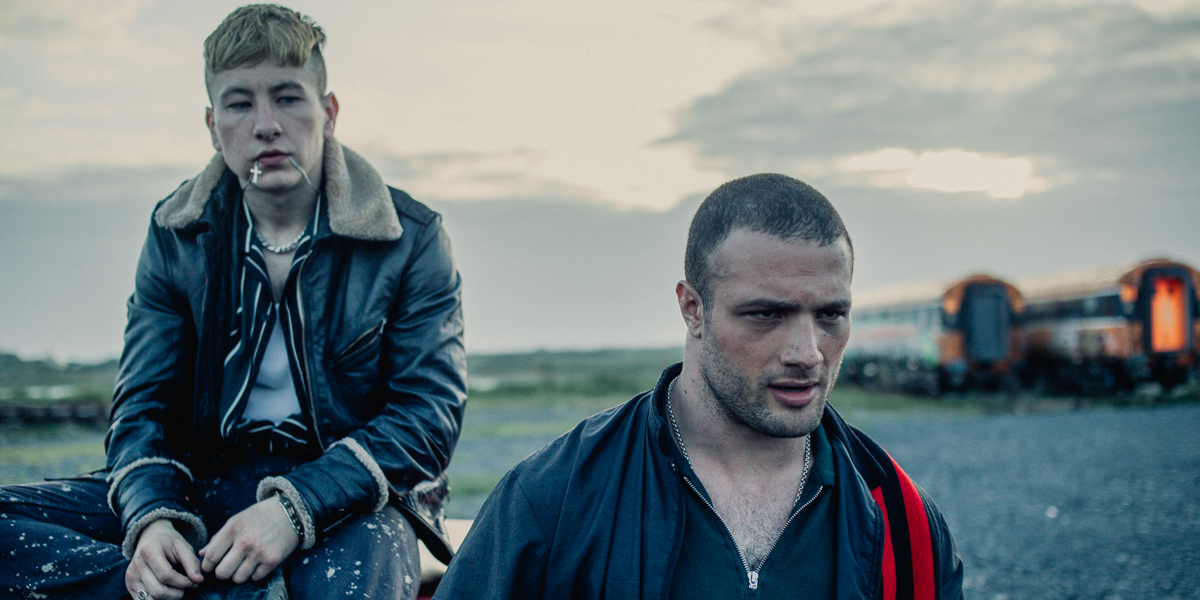 To cross the Devers family is to earn retribution. This is a known fact to all in the rural Irish town of Glanbeigh. Some strangers arrive and overstep their bounds without knowing (as if getting involved with drug dealers was an act whose danger can be unknown), but most everyone knows everyone else’s name and where to find them. So when it’s Fannigan’s (Liam Carney) turn to “make good” on a transgression, he doesn’t try to run. He sits in his chair as Douglas “Arm” Armstrong (Cosmo Jarvis) enters and simply requests that it be “done quick.” Arm obliges without hesitation since he earns no pleasure from what’s become his job. Friend and “brother” Dympna Devers (Barry Keoghan) merely points him in the right direction and says, “Bite.”

This is our introduction to the character and the bleak world where he lives courtesy of director Nick Rowland’s film Calm with Horses. It’s a surprisingly matter-of-fact entry that treats such horror as nothing to blink an eye at because those who have it coming to them are fully cognizant of their fate. That it’s two young men doling out the punishment in Arm and Dympna almost sets them at ease despite the pain since the alternative is having the latter’s uncles do it instead. Hector (David Wilmot) seems more bark than bite as his grift of choice is seducing old widows to steal their money, but Paudi (Ned Dennehy) is the sort who will chop off bits and pieces for no other reason than deriving personal pleasure.

These colorful sociopaths are the creation of author Colin Barrett and his short story collection “Young Skins.” As a Screen International piece from 2018 describes: Rowland’s ability to bring them to life with his feature debut proved a series of happy coincidences and fateful meetings. He and screenwriter Joe Murtagh attended school together and collaborated on short films previously—one starring Joe Cole. Through him they met agent Conor McCaughan who subsequently happened to be fighting against producer Daniel Emmerson (who was on their side) for the rights. Their mutual friendships smoothed things over and it took four years to secure financing. Add Keoghan as an actor Rowland also knew from school and the family atmosphere behind the scenes was surely a welcome contrast to the one depicted on-screen.

What makes the journey inside this nightmare worthwhile is that its strong-arming clan reliant on a reputation for taking its pound of flesh isn’t quite as tough as it thinks. This is due in large part to Dympna taking over a role left vacant by his deceased father as one-third of the family trifecta. Give him time and he might become as brutal as his uncles, but now he’s just a kid thrust into a role he isn’t quite ready to perform. The choice to give Fannigan that aforementioned beating, for example, seems “soft” by everyone except the victim. They didn’t want him hurt. They wanted him dead. So it’s Dympna who’s made a transgression and both he and Arm will pay the price if it’s not rectified.

While easy for Dympna to (fearfully) comply and give an order, Arm will ultimately be doing the deed. Despite what he does with his fists, however, an opening voiceover and a sensitively heartfelt performance by Jarvis exposes that he isn’t a killer. Because it’s easy to be seen as something you’re not in a town as small, drugged-up, and petty as Glanbeigh, this is but a speed bump on the road to Hell the Devers are taking him down. They whisper in his ear that the mother (Niamh Algar’s Ursula) of his autistic child (Kiljan Tyr Moroney’s Jack) is a leech who will bleed him dry and he, being a simple brute too loyal and too trusting to realize the short leash around his neck, listens.

Suddenly Arm is asked to become what he never wanted to be—what he naively quit boxing and walked into the Devil’s arms to avoid despite the inevitability that doing so would always make it true regardless of Dympna’s hollow protection. He can no longer put on headphones and punch faces bloody before stopping for a pint and maybe visiting the son he doesn’t have the patience to realize will never be the definition of “normal” he holds in his mind. He must now confront the disparity between his past (the man Ursula remembers) and his present (what the Devers are making him). Arm might not have a lot of autonomy within his current predicament, but he can ensure he doesn’t bring those he loves down with him.

The result might not be unique in its narrative about a misunderstood man devoid of the means to get out of his own way, but Calm with Horses is stunning in its execution nonetheless. I’ve already mentioned Jarvis—who expands upon his breakout turn in Lady Macbeth—but I don’t want his delivering one of the year’s best performances to be diminished. It’s a role that could have easily been ruined by angst-fueled mumbling and frustration without the necessary heart to earn empathy. He instead lets us know about the pain inside and the never-ending struggle to be good that appears less winnable each and every day. Arm is a man whose purpose was stripped away and reclaimed by monsters doing everything possible to also steal his conscience.

That one of these monsters is Keoghan adds so much to the complexity of the environment because his Dympna is stuck in a similarly precarious position of weighing survival against what’s still left of his soul. When Dennehy goes full creep as Paudi, it’s not just Arm who radiates discomfort. Dympna is just as scared, but he also has the power to act out and project it upon those who must conversely fear him. Rowland gravitates towards and highlights this duality as he brings Barrett’s creation to the screen. He toes the line between optimism and despair throughout so we know happy endings are possible … for some. This world isn’t a fair one, though. Others must succumb to its evil so those lucky few can prosper.

Calm with Horses screened at the Toronto International Film Festival. It has been retitled to The Shadow of Violence for its U.S. release, beginning July 31.