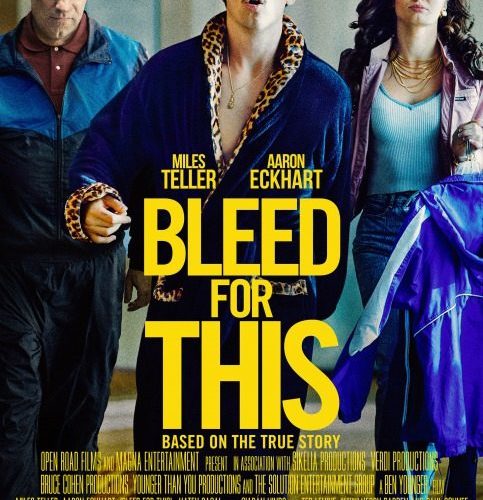 [TIFF Review] Bleed for This

There’s something about boxing movies that gets butts in seats regardless of so many being practically the same story. The formula almost always concerns some type of personal and professional redemption and Ben Younger‘s Bleed for This is no exception. Being a true telling of Vinny Pazienza’s (Miles Teller) arduous journey back into the ring after a near-fatal car crash severed his neck, however, means it possesses some substance beyond the old “washed up” bid for revenge against the press or a former coach/manager who’s now inexplicably repping the opponent. Some of that is present too, but it takes a backseat to watching a tenacious young man beat the odds to prove mankind’s resilience rather than facilitate the usual melodramatic quest of honoring a fridged family member.

Our introduction to Paz is by watching him get beat for the third time in a row on HBO before his manager (Ted Levine‘s Lou) declares his career over. Suddenly the “Tasmanian Devil” gets a new coach (Aaron Eckhart‘s Kevin Rooney) who sees the not so hidden reality of his dehydrating himself to make weight plays a huge factor in his fatigue. I incredulously stared slack-jawed at better health and a higher weight class being his “comeback.” How does that earn him a movie? Boy, the vehicular carnage couldn’t have come soon enough to inject some actual drama.

This isn’t to say the opening third isn’t crucial to the film’s success. Besides Paz’s mother (Katey Sagal‘s Louise) staying relatively identical from start to finish as a worried parent, everyone evolves from this tragedy in some way. The biggest change comes from Ciarán Hinds as Angelo Pazienza. The ever-serious actor is given flashy clothes and slick-backed hair to transform into a beautifully over-the-top stereotype of Italian machismo that pushes his son forward as though his own self-interest isn’t the motivating factor. Hinds has never chewed scenery as he does here and it’s a great departure that earns some welcome humor before his surprisingly heartfelt transformation. Changes in brash sister Doreen (Amanda Clayton) and her innocently simple fiancé Jon (Daniel Sauli) are subtler but still present.

Vinny and Kevin have their own demons to overcome too, their relationship proving the central dramatic arc for Bleed for This. The former is laboring in the ring despite a bottomless wealth of desire and the latter hasn’t had success since Mike Tyson fired him. Paz can’t stop gambling or whoring around with a revolving door of girls his Mom can’t tell apart and Kev was never one to reject alcohol when offered. Winning is their chance to get back on top and while the accident derails the dream, it may save them too. They are living, breathing caricatures and Younger wonderfully allows them to unabashedly be those caricatures for our entertainment. Rehabilitating from this injury is seriously scary stuff, but everyone involved is having fun showing it.

The best description of the film would be Italians busting each other’s balls for two hours—and that goes for the ladies, too, since Clayton’s Doreen is never one to shy away from a good verbal sparring. Eckhart and Teller definitely shine, their quick rapport retaining its no-nonsense edge even when they come at odds. Rather than force Kevin to scream and break Vinny down for not listening to him during training about stopping when told, the tenacity becomes a thematic tool to carry through into the boxer’s insane idea to lift weights before his spine is fused. Despite this last development providing some high emotions courtesy of life and death scenarios, the comedic element of seeing him do it is never lost on the filmmakers.

And the best part is that everything happened. There’s video footage to corroborate each fight, publicity stunt, and home movie workout session with halo attached. I know this because Younger uses them to spice up the drama, going so far as to retain its full-frame aspect ratio so we know when there’s a dramatization onscreen or Paz’s true-life self. He doesn’t use archival material when Vinny is talking—those moments are all Teller. But it’s pretty easy to see that the silent moments of highlights from the ring are all Pazienza. Even the clips building up his fight against Roberto Durán (played by Edwin Rodriguez in the reenactments) show the authentic “hands of stone” (yes, the same Durán whose own biopic starring Édgar Ramirez released earlier this summer). It’s a cool aesthetic choice, but one that begs the question for why we aren’t watching a documentary instead. The footage is there and the stories could easily be told via friends, family, etc. I’d be interested in one releasing as a companion piece to Teller’s wild impersonation. It’d probably be much less funny—although it wouldn’t surprise me if the Pazienza charm shown here comes through in spades—but it would be more emotionally resonate. To hear Vinny tell us about getting the screws removed from his head without a sedative will definitely be more harrowing than Teller yelling sarcastic barbs throughout the ordeal. But I’m glad we get to see the latter too because it is pretty hilarious. Vinny Paz is a bona fide crazy person.

Younger tries incorporating shady behind-the-scenes dealings of management caring more about money than the fighter, but they seem afterthought for the most part. This helps us to understand Kevin as an exception who does put wellbeing ahead of fame and fortune, but we know his allegiance as soon as he begins sleeping at the Paz home during training. There isn’t much drama in the ring—unless you’re hoping the film ends with Vinny breaking his neck again—so the real draw is the display of perseverance and the cartoonish cast helping their guy forward. You won’t get the gravitas of Rocky, Raging Bull, or Creed, but you will get a character worthy of immortalization thanks to spirit and shenanigans. Not every sports film needs to be so dour.

Bleed for This premiered at the Toronto International Film Festival.