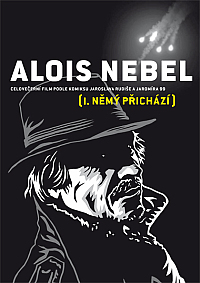 Alois Nebel, the first feature film of director Tomáš Luňák, is a moody black-and-white animated film that diverts from the conventional rules of film form and narrative. It is based off of the Czech graphic novel trilogy, written by Jaroslav Rudiš and illustrated by Jaromír 99. The clarity of plot and the viewers’ understanding of the characters have been compromised for film’s distinct style and unusual storytelling, which may not have helped Alois Nebel to achieve great results.

Those who have knowledge of the history of Czechoslovakia of the twentieth century will have a better understanding of this film’s setting and its relationship to the storylines. Alois Nebel is set in the Czech-Polish border Sudetenland in 1989, when the Communist regime of Czechoslovakia fell. The life of Alois Nebel (Miroslav Krobot), a middle-aged train dispatcher, correlates to this setting. He is a loner who is very comfortable with his routine life. However, he is overcome by hallucinations of fog and of his haunting memories of the end of World War II, when he witnessed the revenge on the German population in Czechoslovakia.

Perhaps his hallucinations were triggered by listening to the contents of the radio, such as the fall of the Berlin Wall. During his stay at the sanitarium, he meets a man known as The Mute. Alois Nebel also focuses on this mysterious character. He carries with him a photograph and a sense of foreboding. After leaving the infirmary, Alois Nebel learns that he has lost his job and becomes homeless. He finds peace and solace during what should have been considered as a difficult time, while The Mute finishes his plan of revenge. This film has several storylines that ambiguously weave with one another. It is very unclear exactly what is happening in Alois Nebel, as it heavily relies on a specific history and the sequence of time that is achronological. This is a very visual film, where dialogue is placed last in priorities. Perhaps, those who have read the graphic novel may have a better grasp of the characters and their relationships with others, as I was a bit confused. One could contemplate and reflect after having watched the film to try to understand the layers, but Alois Nebel targets a very small audience. Without having prior knowledge of the history or graphic novel, the film is difficult to follow.

The stark use of black and white is appropriate for this film as it is directly influenced by the style of the original graphic novel. The sharpness of the black and white and slow suspenseful music helps create a chilling atmosphere. The tones of grays were also utilized to create striking compositions. Because this animation had been rotoscoped over live-action footage, like Richard Linklater’s A Scanner Darkly, viewers are able see physical textures from reality. This feature helps make this animation unique from both traditional animations and live-action films. However, the flow of the animation reminds me of unrefined computer gifs. It may have been more effective to make this film completely animated, as the staggered movements of the characters were distracting. The animation and visual quality is not ground- breaking, nor is it terrible.

Non-Hollywood movies are typically fresh for those who are used to Hollywood conventions.  Audiences may have to think to watch these films, rather than absorbing information like a sponge. Although many viewers may think through Alois Nebel, it may be futile to understand the film unless they have been informed of the twentieth century of Eastern Europe.  This information is also needed to understand the motives of the characters.

The visuals of this animation are good, but not great. What were extremely effective were the use of music and visual compositions to create chilling atmospheres and moods. After researching the setting of Alois Nebel, I may watch it a second time to appreciate the storylines and its connection to history, but with no prior knowledge, this film is ambiguous with questions unanswered.