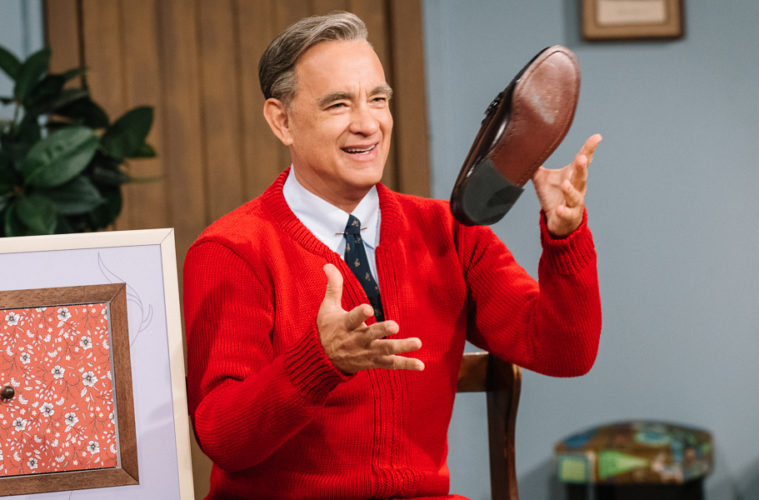 TIFF Review: ‘A Beautiful Day in the Neighborhood’ is a Heartfelt Ode to the Impact of Mr. Rogers

It sounds almost too perfect: Tom Hanks as Mr. Rogers, the beloved children’s entertainer. Of course, who else could it be, really? It is so seemingly predestined, in fact, that Hanks’s first onscreen appearance as Fred Rogers elicits knowing laughter from the audience. Yes, Tom Hanks playing Mr. Rogers looks and sounds exactly how you would imagine. Marielle Heller’s A Beautiful Day in the Neighborhood, however, is much more than an obvious biopic. It’s not really a biopic at all. Nor is it a rehash of 2018’s much-heralded documentary profile of Fred Rogers, Won’t You Be My Neighbor? Instead, this 2019 Toronto International Film Festival world premiere is a deeply felt story of friendship and forgiveness. Truly, what makes Neighborhood such a tremendous success is that it is not a film about Mr. Rogers. Rather, it’s a film about the impact of Mr. Rogers.

The screenplay by Noah Harpster and Micah Fitzerman-Blue is based on Tom Junod’s Esquire article, and the author’s encounter forms the basis for Neighborhood’s plot. Matthew Rhys, the sad-eyed star of TV’s The Americans, plays an Esquire investigative journalist named Lloyd Vogel. The film shows a time—the late 1990s–when print journalism was still seen as capable of changing lives. Blossoming onward from her first two films, The Diary of a Teenage Girl and Can You Ever Forgive Me?, Marielle Heller is clearly adept at capturing the feel of recent history. There is a palpable joy in shots of the old mechanics of magazine production, and, most of all, in the delightfully quaint theatrics of Mister Rogers’ Neighborhood.

Vogel’s assignment to write a 400-world profile of Fred Rogers for a “hero” issue of Esquire arrives at a particularly rough time. In addition to the demands of new fatherhood—Vogel and his wife, Andrea (a wondrous Susan Kelechi Watson, star of This Is Us), have a baby boy—he is also confronted with the reappearance of his distant father. A fistfight at his sister’s wedding reception occurs just before a trip to Pittsburgh to interview the TV icon. Vogel seems to realize innately that he is the wrong writer for the task. Yet Rogers, Vogel is told, sees something in “broken” people. No one is more broken than Vogel, who cannot forgive his father (Chris Cooper) for leaving the family when his mother was near death.

For Lloyd to become the husband father Andrea and son Gavin need, he must learn to forgive, and to move on. These are essential beliefs in the heart of Fred Rogers, but much to Vogel’s consternation he finds it hard to buy into the reality of this man. At one point he refers to “Mr. Rogers” as a character—and Fred is taken aback. Mr. Rogers, after all, is no character. He is flesh, blood, and truth. Hanks’ performance moves far beyond impersonation. Once the initial hurdle of Tom-as-Fred is overcome, the actor skillfully embodies Rogers’s spirit.

Lloyd’s arc is a bit too clear-cut, perhaps, but it’s also written and acted with expert precision. Rhys strikes just the right notes as a man who is somber, angry, and sometimes downright nasty. Yet there’s also a sense of desperation. He is desperate to deal with his anger—he just does not realize that until he’s had deep discussions with Fred Rogers. Oftentimes this conceit of a sideways entrance into a story about a real-life person does not work. Yet in Neighborhood, getting to know Mr. Rogers via Lloyd’s perspective feels right. Perhaps a little bit more time with some of the periphery characters in Rogers’s life, like his wife Joann, would have been welcome. But Heller knows not to overdo it. This is the story of Lloyd Vogel’s interaction with Mr. Rogers, and that’s enough.

With just three films, A Beautiful Day in the Neighborhood solidifies Marielle Heller’s spot on the list of the most consistent filmmakers working today. Her run of success has been rather quiet thus far, but Neighborhood deserves to move her into the ranks of a major director. There are moments—Mr. Rogers hugging a young boy on set, a subway full of people singing the Mister Rogers theme song—that, in lesser hands, might be overblown or even maudlin. In Heller’s hands, however, they are truly heartfelt. She has directed one of the year’s most entertaining films, and the one that might elicit the most weeping. It all culminates in a final scene that is as eloquent as it is wise. Just like Fred Rogers.

A Beautiful Day in the Neighborhood premiered at the Toronto International Film Festival and opens on November 22.